More than a market: Where the women of Manipur sell, debate, trade and protest 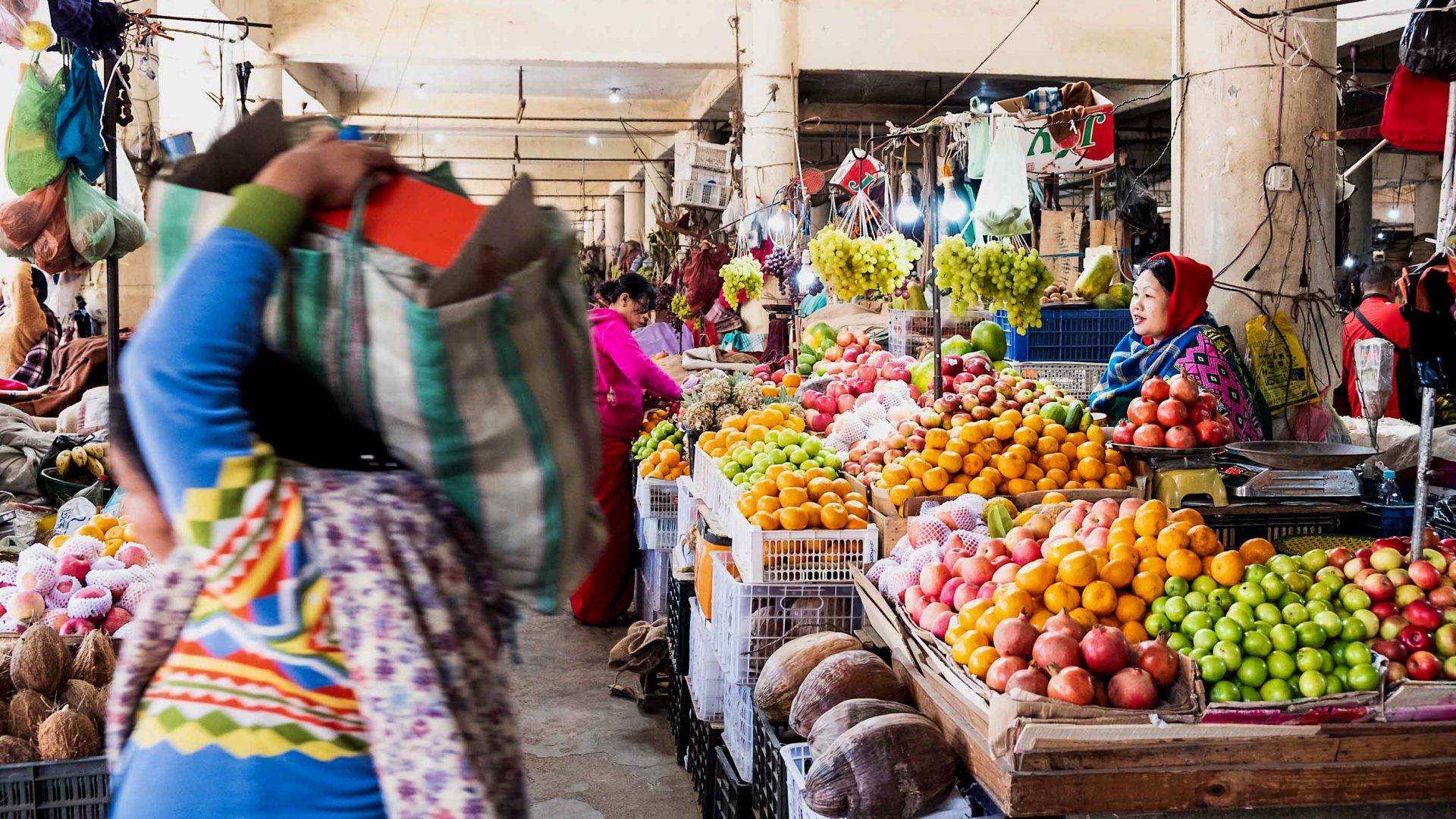 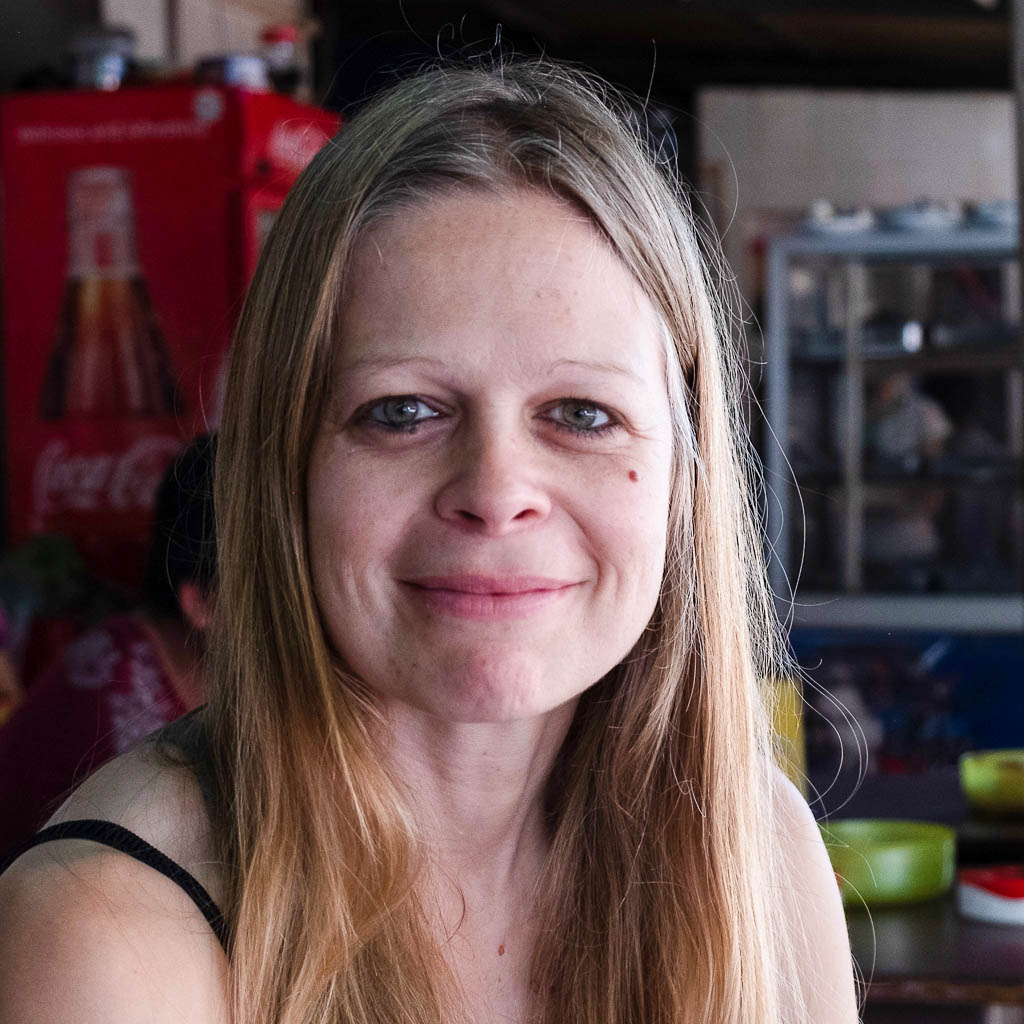 In northeastern India, there’s a market with a difference: At Ima Keithel, only women can trade. But that’s not all—it’s also a community hub that inspires change and empowerment. Eileen McDougall talks to the Imas, or the ‘mothers of Manipur’.

Anandi Devi is holding my upturned hands in hers, looking seriously at my palms. She lets out a long sigh. “Yes, you will get married soon. You already know him. Just wait and he will come.”

The surrounding ladies, hunching on tiny wicker stools behind towering piles of shawls, cackle. Anandi runs her forefinger downwards from the crown of my head and jabs me under my breasts. “Any stomach problems you have are from thinking too much.” She erupts in laughter, clasps my head in both hands and smacks a kiss on my forehead.

Anandi Devi is one of over 4,000 women, known as Imas, who gather daily at Ima Keithel, the main market in the north-eastern state of Manipur. Situated in a remote corner of India bordering Burma/Myanmar, this market is unique: Here, men are forbidden from trading.

Highly coveted in the local communities, a pitch in Ima Keithel is usually passed down through the female members of a family. The main market is housed in three concrete buildings in Imphal, Manipur’s capital city.

Thousands more informal vendors crowd the surrounding area, invading the lanes and traffic-jammed roads with their fresh produce. Everything, from locally produced salt to squirming eels, is available here, and most of the items are produced right here in Manipur.

RELATED: The woman who rode her motorcycle, solo, through India’s far northeast

When I arrive on a sunny winter morning, many Imas are still unpacking their wares, but most are already positioned behind their stalls. As I circle the market taking photographs, the jokes start coming. “Are you going to buy something?” Many are concerned about my bare arms—they’re wrapped in a kaleidoscope of shawls and blankets.

Dating back to the 16th century, it’s believed Ima Keithel formed out of forced labor, known as the Lallup-Kaba system. Landlocked and a common target of the neighboring Burmese, the ancient kingdom of Manipur was continually forced to fight to maintain its independence. The Lallup-Kaba sent the men far from home to fight in these wars, leaving the women in charge of tending the land, selling the produce and controlling the family finances.

“During a protest, we close all our stalls, and make a human chain around the market, blocking the roads. If we don’t agree with something, we strike.”

As I tuck into the mixture of unrecognizable ingredients, she tells me she’s been working in the market for 20 years. A mother of four children, she is the only earner in her family—her husband died 15 years ago. “From selling singju, I have managed to send my son to university in Bangalore,” she says.

Employment relating to the market is crucial in providing for the basic needs of thousands of families. The appalling roads have already given me the sense that Manipur has been somewhat forgotten by the country’s distant capital. The locals tell me there is scant industry and few service sector jobs. Most young people leave the state in search of either education or work.

This dire economic state is, at least partially, due to the political instability that has dogged the area since the formation of India. Manipur had remained an independent territory for over 2,500 years until it became part of British India in 1891.

However, with independence in 1947, it was forcibly subsumed into the Union of India, setting off a seemingly indefinite cycle of violence as a hotchpotch of armed ethnic groups fought for their visions of the state’s future.

As a result, from 1980 until today, most of Manipur has been subject to the Armed Forces (Special Powers) Act which gives the Indian Army extra powers with the aim of maintaining public order. In practice, it gives them the ability to arrest or kill without the fear of prosecution.

Over such human rights abuses, the women in Manipur have been at the forefront of protests. Most famously in 2004, nine Manipuri women protested naked outside an Indian Army base in central Imphal following the rape and murder of a local woman by army forces. The base later relocated.

Following my palm-reading, Anandi excitedly tells me about the culture of resistance embedded in the market. “During a protest, we close all our stalls, and make a human chain around the market, blocking the roads,” she says. “If we don’t agree with something, we strike.”

Walking around the market, I notice posters bearing the hammer and sickle, and images of local revolutionary leaders. Political slogans are spray-painted to the outside walls. In this troubled state, it is said all protests over political and social issues originate here in Ima Keithel.

As recently as November 2019, the Imas were leading protests against the Indian government’s controversial Citizen’s Amendment Act, a law which makes it easier for non-Muslims in neighboring Muslim countries to gain citizenship of India.

… I get the overwhelming sense that the market is more than a job: It’s a crucial social institution and a way of life for thousands of women. Here, news is shared, ideas are debated, protests shaped, financial credit disbursed, all with a sprinkle of humor.

With the current lack of jobs in Manipur, the possibility of a significant immigrant flow from Bangladesh is met by locals with some ire. “For five whole days and nights, all the women came out to the middle of the road. We didn’t go home,” says Kunjamani Devi, an Ima active in protest-organizing. The following month, Manipur was effectively made exempt from this legislation.

Female resistance over perceived injustices in Manipur dates to the time of British rule, at least. In the 1930s, in what’s known as the Nupi Lan, or Women’s War, the Imas protested the excessive exports of local rice to British battalions in other territories.

The British responded by trying to sell the market buildings. When the Imas refused to relent, the British deployed the military against the unarmed women, but eventually reversed the policy.

And while the state’s rulers may change, the Imas’ protests continue. Kunjamani recounts how in 2003 the local government tried to replace Ima Keithel with a modern shopping mall. “There was a huge tussle between us and the government!” she says. “For three months, we organized 24-hour sit-ins and didn’t do any business.”

Casually, she adds how the government used tear gas to disperse them, injuring many. The plan was shelved—a clear indication of the level of influence the Imas have obtained in Manipuri society—all the more notable in a country where most women have little influence over societal affairs.

Indeed, the rows of matriarchs sitting in Ima Keithel appear an intimidating force. From all my conversations with them, I get the overwhelming sense that the market is more than a job: It’s a crucial social institution and a way of life for thousands of women. Here, news is shared, ideas are debated, protests shaped, financial credit disbursed, all with a sprinkle of humor.

Before I leave the market, I return for a second plate of addictive singju. Y Memcha tells me about the time she got really sick and had to go to Delhi for treatment. “I was so upset at the thought of not being able to come here anymore,” she says. “I can’t imagine life without it.”

Before I bid her goodbye, I ask to take her photo. “Make me famous!” she quips, and bursts out laughing.

Eileen is a traveler and writer focusing on cultural, developmental and gender issues in South Asia. She is at her happiest on a bus heading off somewhere new, but still very much in love with her native Scottish Highlands. 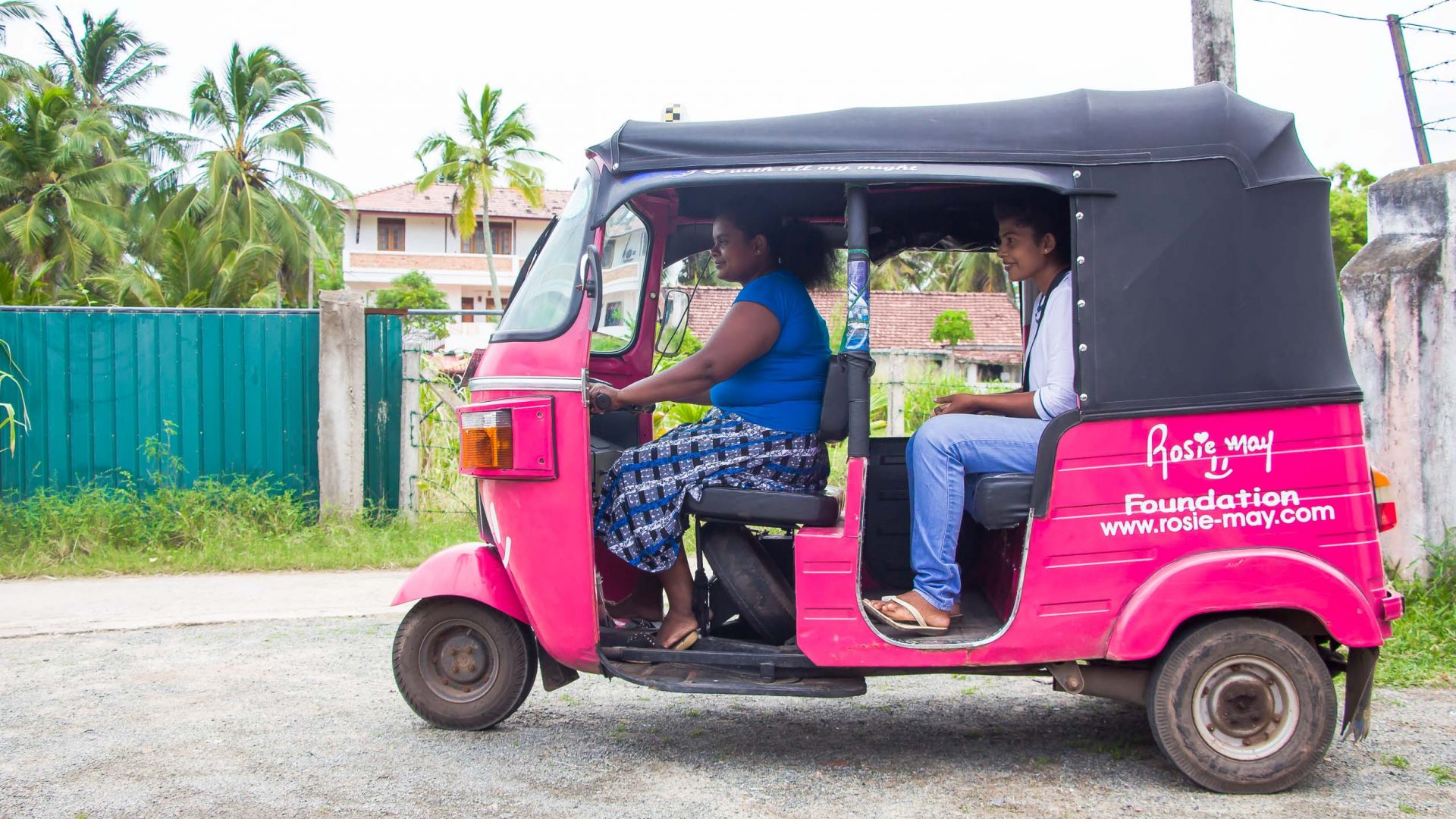 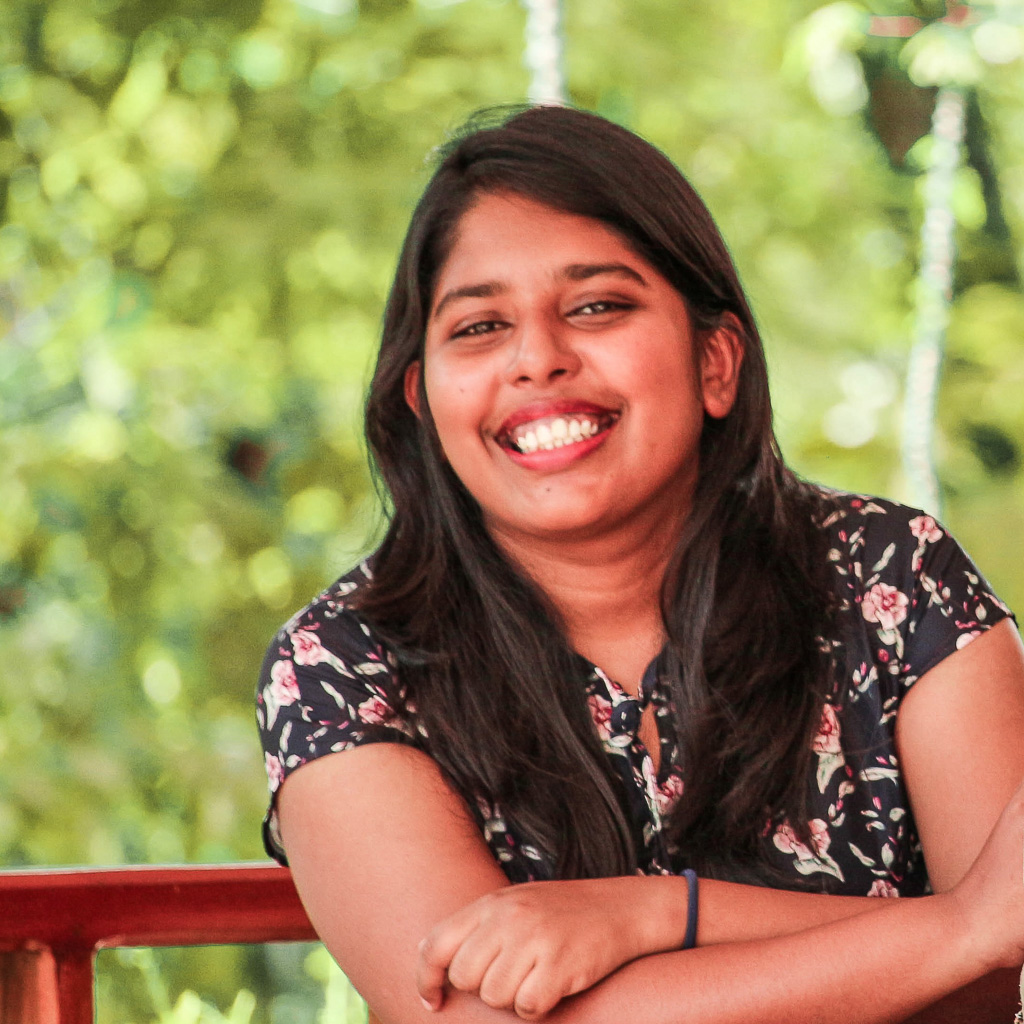