Iceland may not be the first place which comes to mind when you think about surfing. But in these windy waters, it’s not always easy to catch a break, as writer James Stewart discovers when he talks to the man who’s discovered more surf spots here than anyone else.

For decades, the surfing dream has been tropical. The sport’s imagery—hibiscus flowers and palm trees, Hawaiian shirts and flipflops—originates from its warm-water wellsprings of Hawaii and California. Perfection to most surfers is a glassy wave you can ride wearing only boardshorts and sunblock.

Yet wanderlust—or at least the promise of an empty peak—is hardwired into the surfing psyche, and as wetsuit technology has improved, surf breaks have become colder. Today’s surf adventurers head not to Bali but to British Columbia and Iceland. Surprised? You won’t be the first. The standard reaction to Icelandic surfing hasn’t changed much since American personnel stationed at NATO’s Keflavik air base in the early 1990s rode waves at Sandvig, on Reykjanes Peninsula.

“I was, like, ‘Surfing in Iceland? Are you kidding me?’” Ingó Olsen recalls. Then a semi-pro snowboarder, he learned about local wave-riding in 1997. “I went along one summer evening with a friend. I had an old wetsuit, wool socks with plastic bags over them, sneakers and a foam board shared between two of us. It was so much fun. I was, like, ‘OK, I need to check this out.’”

Long graduated from a boogieboard stolen from a swimming pool, Ingó has discovered more Icelandic breaks than any surfer on the planet. In 2011, he founded Icelandic surf tour company Arctic Surfers. Today, in his late 30s, he is the grand old man of Iceland surfing.

And if that sounds bizarre, consider this. Estimates suggest around two million people surf in the US. In the UK, it’s around 550,000. In Iceland, that number is around 30. Iceland today is where Malibu was in the early Fifties. And unlike Malibu, in the land of the midnight sun you can surf 24 hours a day in summer.

Ingó says: “We have really good waves. You need to know the weather. It’s not like there’s swell for, say, three days—more like half a day or so for a quick session. But you can have a break to yourself with amazing mountain backdrops.”

And the cold water? It’s not as horrible as people think, he says. Water temperatures from 5˚-14˚C are acceptable so long as you have a good wetsuit (5mm in summer, 6mm in winter), plus boots, balaclava and gloves. It helps that Icelanders are tough. They’re descended from Vikings. They have a verb—að nenna—solely for the concept of being willing to persevere through something tough. “If you’re worried about the weather in Iceland, you’d never be outside,” Ingó says. “You just have to put up with it, bring the right clothing and go for it.”

So, if Icelanders were slow to catch on to surfing, their culture may be to blame. “We are a country of fishermen and here the ocean means death—you don’t play in it,” says 30-year-old photographer Valdimar Thorlacius. “When I started surfing, people looked at me like, ‘What the hell is wrong with you?’ It wasn’t something cool like in other countries. It was stupid.”

With the surf breaking over lava fields and huge rocks, it’s wise to remember Mother Nature doesn’t always have your back.

Valdimar made Iceland’s first surfboard in 2009. More have followed; some for himself, some for friends, all carved from blocks of foam rather than from the semi-shaped ‘blanks’ that are standard today. As surfing becomes ever-more commercial, it is a throwback to surfing’s pioneering DIY days. Just like Icelandic surfing in fact.

As in the dawn of modern surfing, Iceland offers almost limitless potential for exploration. Exposed to every low pressure system that helter-skelters across the North Atlantic, blessed by a fiddly coastline that refracts swell into rideable waves, it is a destination where any experienced surfer with a sense of adventure may find empty reef-breaks and walling points. However, unknown heavy waves and cold are potentially lethal if surfed alone; with the surf breaking over lava fields and huge rocks, it’s wise to remember Mother Nature doesn’t always have your back.

“The secret to scoring good surf in Iceland is research. Surf magazines are, like, ‘Go to Iceland: there are always great waves’ and that’s not true. We have to work for it.”

The breaks are like a wave machine when they work, Heiðar Logi says. Blond and blue-eyed, Heiðar looks more Californian than Iceland’s first pro surfer. He tells me of “sick” Thorli days when the surf has barrelled 300m across the bay; of whales and seals in the line-up (the area where surfers wait for unbroken waves) and of large chunks of ice in winter.

The secret to scoring good surf in Iceland, he says, is research. “Surf magazines are, like, ‘Go to Iceland: there are always great waves’ and that’s not true. We have to work for it; this break in this wind at that tide, another at another time in another wind direction. The North Atlantic wind is a piece of work; it can really make you curse. Sometimes you have a window of just two hours when it’ll be rideable.”

Despite fickle weather, despite the punishing climate, Heiðar and Ingó count themselves blessed. Ingó says: “We know we’re lucky. We’re one of the few countries in the world that is not overrun with surfers. It’s been a well-kept secret for many years.”

Now the secret’s out, surfers from all over have arrived in search of the flawless empty waves they’ve seen in magazines and films. Is that a problem in a country where four surfers represents a crowd? “We always knew it would happen,” Ingó says diplomatically. “That’s why we as Icelanders set up Arctic Surfers—if not, someone from outside would have. And it’s good to have some foreigners in the water, although when there are more of them than locals, that spooks everyone out!” He adds: “If foreigners show respect, they’ll get respect. Local surfers are really cool people. Don’t be a jerk and everyone will get along and get waves.”

When we meet, Ingó was just back from a ‘surfari’ in the fjords of the north coast. There was just him and a few friends, scouting out unridden breaks, camping for free on lonely headlands. The scenery remained epic even if the surf crapped out. I can’t think of anywhere else in Europe—possibly in the first world—where such surf pioneering remains possible.

“The waves, the people, the scenery, even the cold water—they make being in the water here totally different to surfing in other countries,” Valdimar says. “Surfing here is about freedom. There’s usually no one out, so you can go and have a spot to yourself for, well, for days.”

And that really is the surfing dream—just much much colder.

James Stewart is an award-winnning journalist who writes for UK newspapers and magazines such as the Sunday Times, Guardian, Telegraph, and Wanderlust. A sailor, surfer and diver, he practically has salt water for blood. 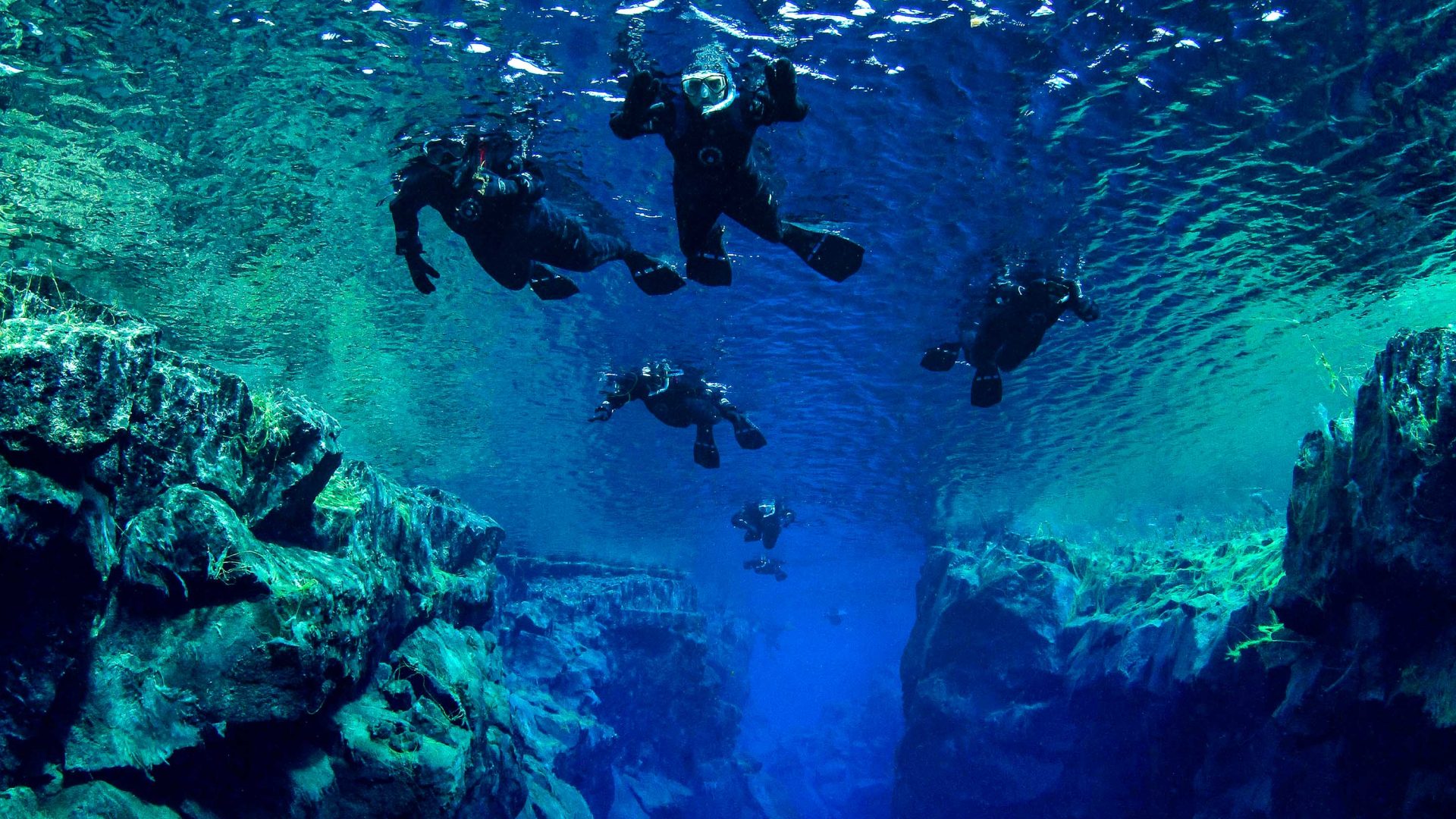 Between two continents: Snorkeling in Iceland