Sign of the times: Can Bangladesh’s rickshaw artists survive modernization? 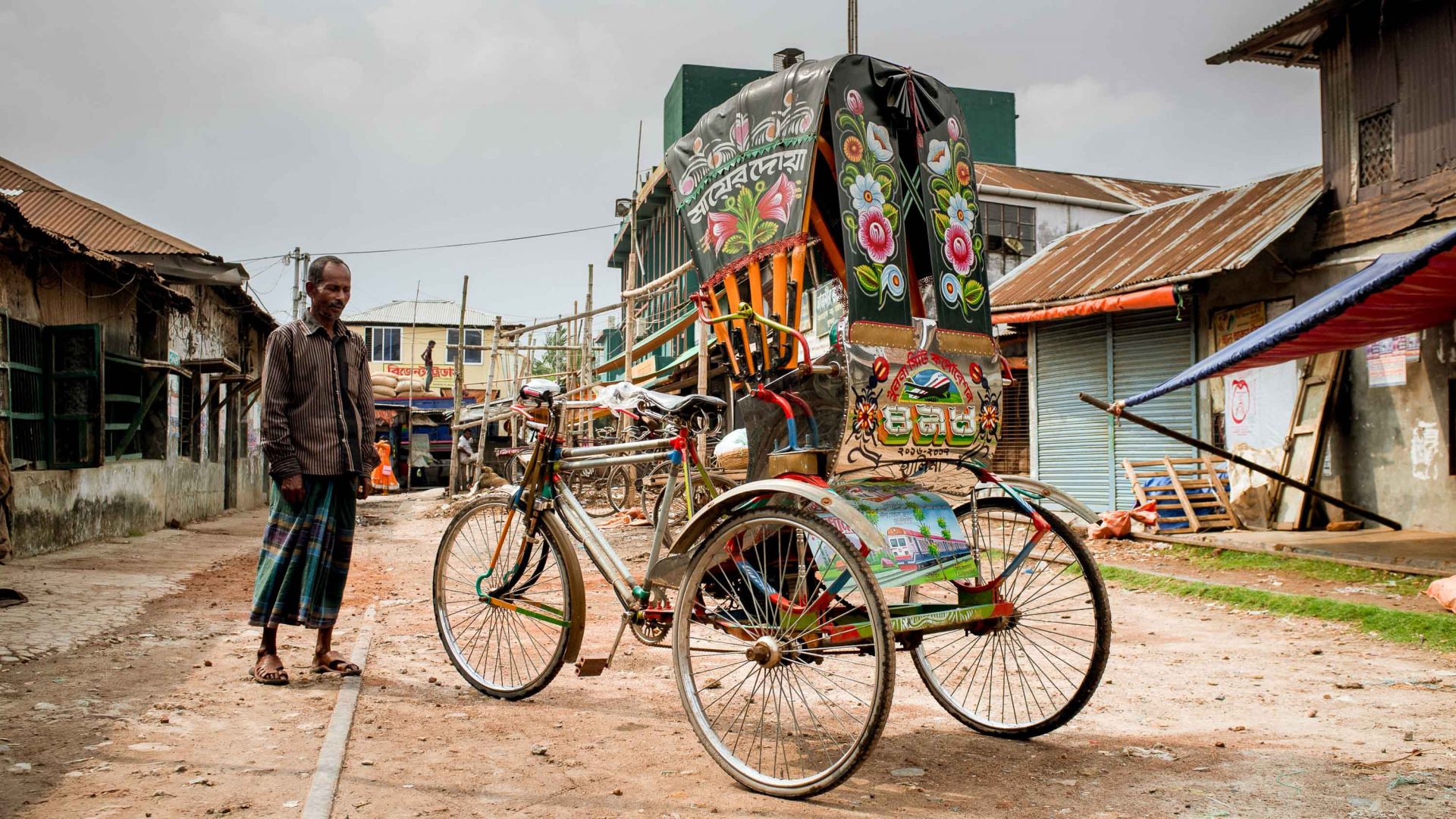 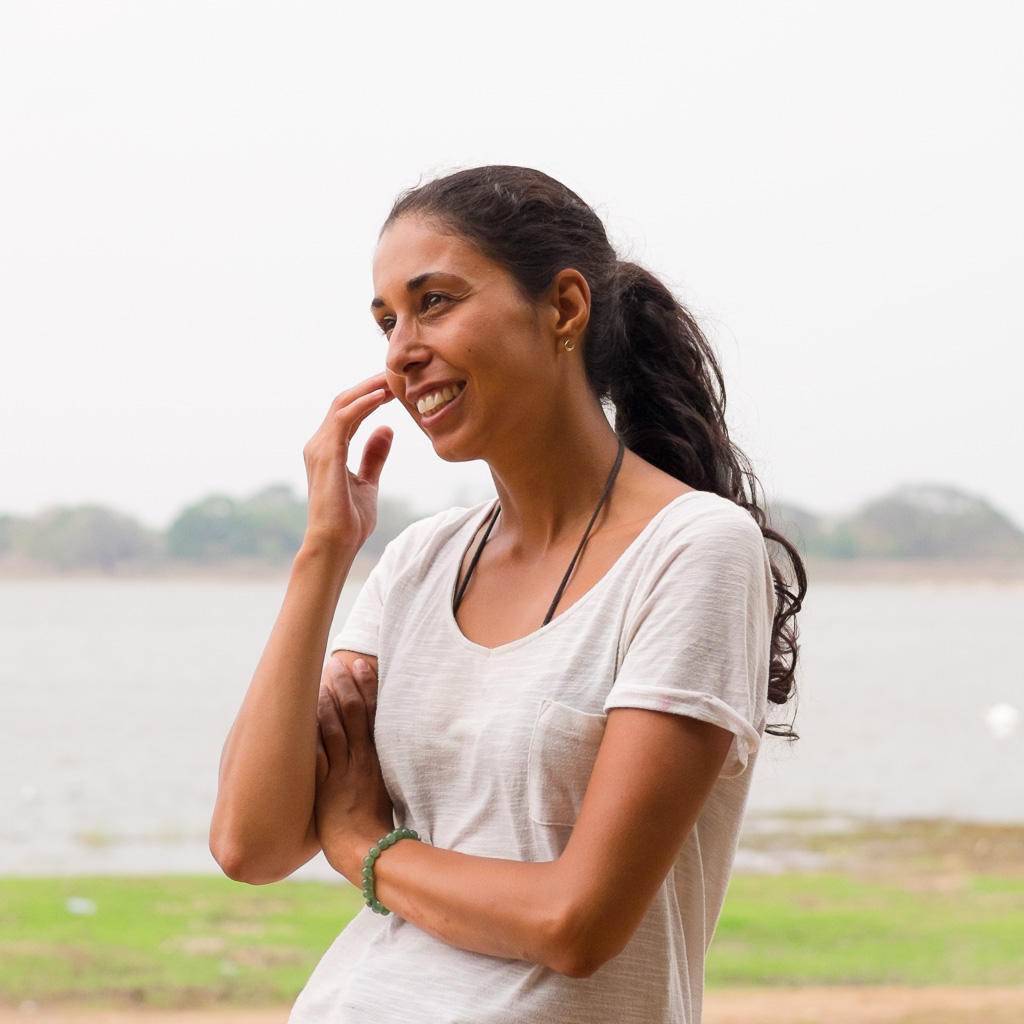 They bring color to the streets of Dhaka, but as populations rise and cities modernize, Bangladesh’s rickshaws, and the traditional art that adorns them, are at risk.

On one of Old Town Dhaka’s narrow lanes, two men toil away in a cycle rickshaw workshop. One at a treadle sewing machine stitching plastic appliqué panels, the other painting metal wheel rims. Beside them is a new rickshaw, decorated with hot-pink illustrations of three film stars, a festooned hood, metal stud detailing and handlebar streamers.

Outside, Yousuf, a rickshaw artist, unfurls a fabric scroll revealing an illustration like the one on the new rickshaw. “This is one of the most popular rickshaw paintings in Dhaka,” he says. The piece isn’t destined for a rickshaw though; it was a tourist commission.

Creating art for visitors has become a new income stream—because these days there isn’t enough rickshaw painting work to sustain Yousuf and his family. “There are still a few other artists working here in Old Dhaka. Probably around 12 of us.”

Dhaka, Bangladesh’s capital and one of the world’s most densely populated cities, has earned the nickname ‘rickshaw capital of the world’. The city is home to an estimated one million cycle rickshaws. And in only a few short hours in Dhaka, you’ll feel as though you’ve seen that many.

Colored brighter than a rainbow, the rickshaws are impossible to ignore on the city’s chaotic streets. But it’s the illustrated tin rectangles at the back of the rickshaws that catch my eye first, leading me to seek out some of the artists.

Cycle rickshaws have been plying the streets of Bangladesh since the 1940s, but illustrations only started to adorn them in the 1950s. And it was during Bangladesh’s struggle for independence from Pakistan in the early 1970s that rickshaw art bloomed.

The period of transition and violence leading to independence in 1971 saw rickshaw art take on a more political and propagandist tone, with illustrations of Bangladeshi moon landings and Pakistani war atrocities.

“I stopped about 14 years ago, I’m a sign-painter now. Mass-produced artwork is to blame for no-one wanting hand-painted art. We can’t compete with the price.”

Rickshaw art continues to capture snapshots of Bangladeshi life, providing a space on which to express something about popular culture, beliefs and aspirations. Depending where in the country you visit, the art changes. In Dhaka, pink-hued movie stars’ faces and depictions of the Taj Mahal are popular; in the northeastern city of Sylhet, illustrations reflect a devotion to Islam while in Khulna, in the southwest, depictions of trains and planes are fashionable.

And the point of all this colorful eye-candy? It was, and still is, to attract customers to hire the rickshaw. Good old-fashioned marketing.

From Dhaka, I pick up the rickshaw trail on the muggy streets of Rajshahi, an industrial city near the western border with India. The tinkling sounds of rickshaw bells fill the air and idyllic pastoral scenes dominate the rickshaw back-plates.

I track down a local rickshaw artist, but I’m too late. “I stopped painting about 10 years ago,” he tells me. He explains that he runs the family rickshaw repair garage now. A mural of Sheikh Mujibur Rahman, Bangladesh’s omnipresent founding father, painted on the workshop wall in front of us confirms he’s a talented artist.

“I couldn’t compete with the price of digitally produced art, and the local government stopped issuing rickshaw permits, so there aren’t enough rickshaws to paint.”

It’s not as simple as keeping with tradition. Traffic congestion is a problem across Bangladesh—getting from one side of Dhaka to the other can take hours and for the government, rickshaws are a symbol of underdevelopment and the scourge of congestion in the country’s crowded cities. And yet, with one in four Bangladeshis living in poverty, rickshaws remain an essential and affordable mode of transport.

My next stop, Chittagong on the southeast coast, is home to Bangladesh’s biggest port, and where the traffic is as bad as Dhaka’s. A tip from a local friend leads me to a covered arcade of shops, humming with the sound of sewing machines. Inside, a middle-aged man in a lunghi (sarong) and short-sleeved shirt sits on a wooden stool, painting lily-flower designs onto a rickshaw panel.

Bonjo trained as a rickshaw artist in 1969 and has had his own workshop for 35 years. Three students trained under him, but none work as rickshaw artists any more, “There’s not enough work for them now. A few artists I know left Bangladesh to work in the Middle East,” he says.

When work does come in, Bonjo works around the clock, alongside his son, who is not an artist. The pair is finishing a bulk job of 10 new rickshaws, which they’re painting with simple water-lily motifs, the national flower of Bangladesh.

In the workshop next door, three lively young men stitch rickshaw hoods and seat covers with lightning speed. Stacks of embellished plastic panels line the shelves and the floor space is cluttered with bags of trimmings and rickshaw parts. It’s the combined effect of the artwork and appliqué decorations that make Bangladeshi rickshaws the most striking and unique I’ve ever seen.

Acceptance and adapting seem to be key to survival here for Bangladesh’s talented rickshaw artists. While Yousuf’s first love is painting rickshaws, he also enjoys painting vibrant wildlife scenes and depictions of idyllic village life. “The artwork for tourists is more varied than the work I create for the rickshaws,” he says.

A few days later, in the northeastern tea-growing town of Srimangal, I meet local artist Bulbul in his studio. Opposite the door is a wall mural depicting victims of the famine that ravaged Bangladesh in 1974.

Bulbul no longer paints rickshaws. “I stopped about 14 years ago, I’m a sign-painter now.” He opens a book, demonstrating how he checks the spelling for the signs he paints. “Mass-produced artwork is to blame for no-one wanting hand-painted art. We can’t compete with the price,” he adds.

Companies sell digitally mass-produced artwork at half the price artists charge—so artists have to ‘adapt or die’. At least, hand-painted signs are still popular in Bangladesh and for Bulbul, that’s proved a more profitable way to use his skills.

Back in Old Dhaka, where this colorful odyssey began, I meet Yousuf again. The narrow, leafy courtyard of his apartment, where neighbors chat and children play, is also his home studio while the corner opposite his front door serves as his compact workspace. An easel, paints, brushes and canvases are organized on a wooden platform at which Yousuf sits cross-legged.

“My father was an artist and I learned how to paint from him,” he tells me. “My six brothers are all artists too.” Yousuf’s father is a renowned first-generation artist called Golam Nabi.

Acceptance and adapting seem to be key to survival here for Bangladesh’s talented rickshaw artists. While Yousuf’s first love is painting rickshaws, he also enjoys painting vibrant wildlife scenes and depictions of idyllic village life. “The artwork for tourists is more varied than the work I create for the rickshaws,” he says. It’s also more sophisticated and detailed than the work I’ve seen on the rickshaws, I note.

With the push to remove rickshaws from the roads and the rise in mass production and digitization, it’s hard to know how much longer Yousuf and those like him will be able to continue their work.

Still, Yousuf himself is hoping to pass down his skills. In fact, his young daughter, Asha, is sat beside him, watching her father paint and playing with his brushes. “She seems interested in learning to paint,” he says, looking down at her—with something that looks a lot like pride.

Souad is a freelance writer and food anthropologist, endlessly fascinated by the people and stories behind the places she visits. Originally from London, she is currently traveling in Latin America and attempting to become a fluent Spanish speaker.