On the Incense Route: How frankincense helped changed the world 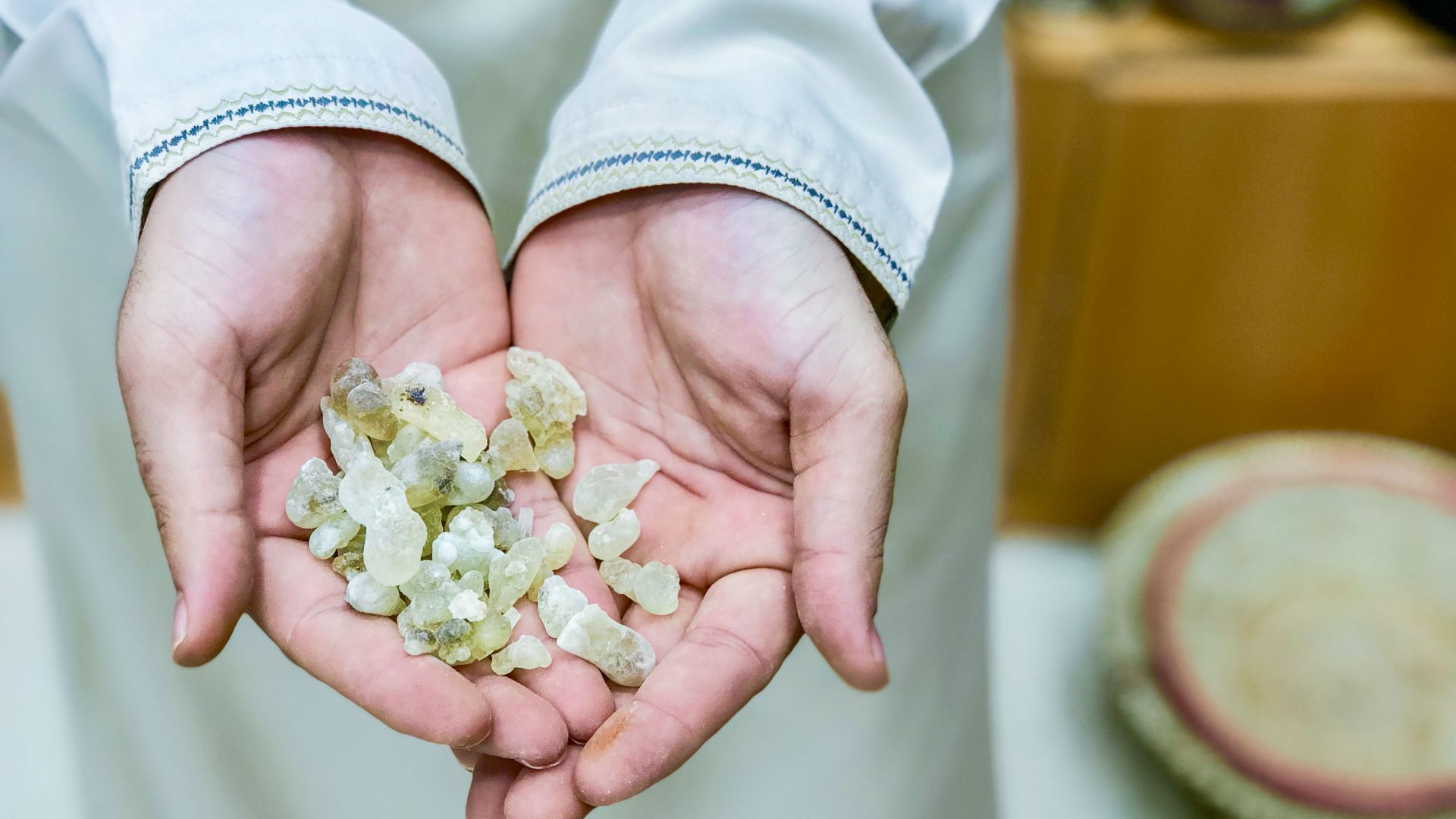 Mystical, pure and precious, frankincense is more than just an aroma. Emma Thomson follows the Incense Route in Oman to explore its 6,000-year-old story, and how its discovery changed this part of the world.

The smoke coils around the man’s sandaled feet like a cobra, slowly snaking inside his long white dishdasha (robe), until the air, and my head, are hazy from the rich perfume.

He places another tarnished green nugget on the smouldering charcoal. It fizzes a little. Travelers wander through the souk and stop to sniff the air. In a world clouded by celebrity-endorsed scents, this aroma is ancient, pure and mystical. It is frankincense.

Known as ‘white gold’, it’s been traded for over 6,000 years. Egyptians packed the body cavities with it during the mummification process; Wise Man Melchior famously brought it as a gift for baby Jesus; Queen Sheba ferried it to Jerusalem when meeting King Solomon; and Roman emperor, Nero, burned an entire year’s harvest of frankincense at the funeral of his favorite mistress.

Churches and mosques also hungered for the humble resin they called Arabia Felix (‘Arabia the Blessed’), which is harvested by cutting the bark of the Boswellia sacra tree and leaving the sun-dried sap to congeal on the surface.

RELATED: Iran: One of 2018’s most underrated destinations

The stunted gnarled trees—which only produce resin when they’re 10 years old—grow in Yemen, Somalia and Ethiopia, but the best frankincense originates in Oman, where the limestone soil and arid climate produce the highest-quality fragrance.

In fact, the country’s southern Dhofar region, which surrounds modern-day Salalah, sat at the center of an ancient Incense Route that originated separately from the Silk Road between 700BC and 200AD.

The resin was carried by camels across the desert to what we know today as Saudi Arabia, Iraq, and Egypt, and across the sea to India, China, Africa and Europe aboard 40-meter-long Baghla boats, their double-tier white sails swollen with wind.

As demand grew, workers of the pre-Islamic empire of Hadramat were sent to build port cities along the coast at Al-Baleed, Mirbat and Hasik. Chief among them was Sumhuram.

At first, the sun obscures what’s behind the Perspex sheet, but as my eyes adjust, I can make out scratches in the rock—2,300-year-old Arabian inscriptions.

Perched on a cliff overlooking the mirror-flat Indian Ocean, Sumhuram served as a bridge between east and west and the city became home to 500 people, with temples, palaces, public toilets, workshops and private homes—all surrounded by a city wall.

Marco Polo mentioned it in his writings, but wrongly described its location in Yemen, so the site wasn’t discovered until the late 19th century—and it was another half a century before archaeologists started brushing away the dirt in 1950.

As we approach the UNESCO-listed ruins, the fierce sun singes our noses. Flat dry plains lie all around, but in its heyday, this area was green with grain, sorghum and coconuts, while leopards and black panthers roamed the nearby mountains.

We pass through the former monumental entrance gate. Goatskin has been wedged between the limestone slabs to demarcate the original and new stones. “Look here,” points my guide, Raya, clad in a black hijab and abaya. At first, the sun obscures what’s behind the Perspex sheet, but as my eyes adjust, I can make out scratches in the rock—2,300-year-old Arabian inscriptions.

We wander further. Clearest to make out are the central water well and temple dedicated to the moon god Sin, but many areas are harder to discern. On the ground is a stone senet (the world’s oldest board game), and huge amphora—proof of trade with Egypt and India—propped against the walls, as if the owner has simply ambled off to fetch something.

“Only Omanis are allowed to collect frankincense so as not to anger the ‘jinns’ [supernatural pre-Islamic spirits]. Baleed has the best position in Salalah, but no-one builds their house there because they believe it’s inhabited by the genies.”

Exiting via another gate, we’re met with a sweeping view of the bay where Wadi Durbat joins the ocean. Where soldiers once killed whales on the sands, herons and camels now stand, cooling their ankles in the shallows. Nearby are two old dhows and ruins still waiting to be excavated. “They’re possibly old frankincense stores,” says Raya.

I turn back to survey the site and try to imagine the fort whose wealth was so admired that even Alexander the Great spoke of conquering the ‘port of perfumes’.

And a Greek seafarer described seeing Sumhuram for the first time like this: “Incense can stand by the quay without being guarded, thanks to the power of a god that protects it. Not even a grain of the precious resin can be loaded unlawfully. If a grain of incense is loaded, the ship cannot sail for it is against the will of the god.”

The god he speaks of are jinns—supernatural pre-Islamic spirits. Belief in them runs strong even today. “Only Omanis are allowed to collect frankincense so as not to anger the jinns,” says Raya. “Baleed has the best position in Salalah, but no-one builds their house there because they believe it’s inhabited by the genies.”

“We still open the windows and burn frankincense before it gets dark,” she adds, “to keep out jinns and sickness. And in a way, we do that because we now know frankincense kills viruses.”

Indeed, the forts may have crumbled but frankincense is as much in demand as ever. From the expensive medicinal Al-Hojari variety, used to treat high blood pressure, nausea, indigestion, improve memory and as toothpaste, to Annajdi and Asha’bi, which is burned to scent clothes and keep mosquitoes away. “We’re trying to keep frankincense alive among the youth,” laughs Raya. “I sneak it into their drinks!”

Driving back towards Salalah, we pull off the road into a gulley and I follow Raya on foot towards a frankincense tree. The bark has already been cut and sap is crystalizing on the surface like raw sugar. These trees are under threat. Ecologists are concerned that production of the fragrant resin will decline by half over the next 15 years, or the land lost to agriculture, because the old trees aren’t being replaced.

Raya takes me to Al Hafa Souk in Salalah. The streets are dusty and quiet. This souk will soon be torn down to make way for a newer, shinier version, so most of the stalls are closed. One remains open: A husband and wife proffering clay burners and bags of pale-green frankincense rocks. I hand over some rials and the man wraps my purchase in newspaper.

It’s not as romantic as arriving on camelback, but when I light it later that night and the citrus scent fills the room, I’m transported back to that first day in the souk.

This humble nugget of dried sap brought about the innovation of using camels as pack animals, the early adoption of a written language and advances in shipbuilding. No other perfume can claim such power. 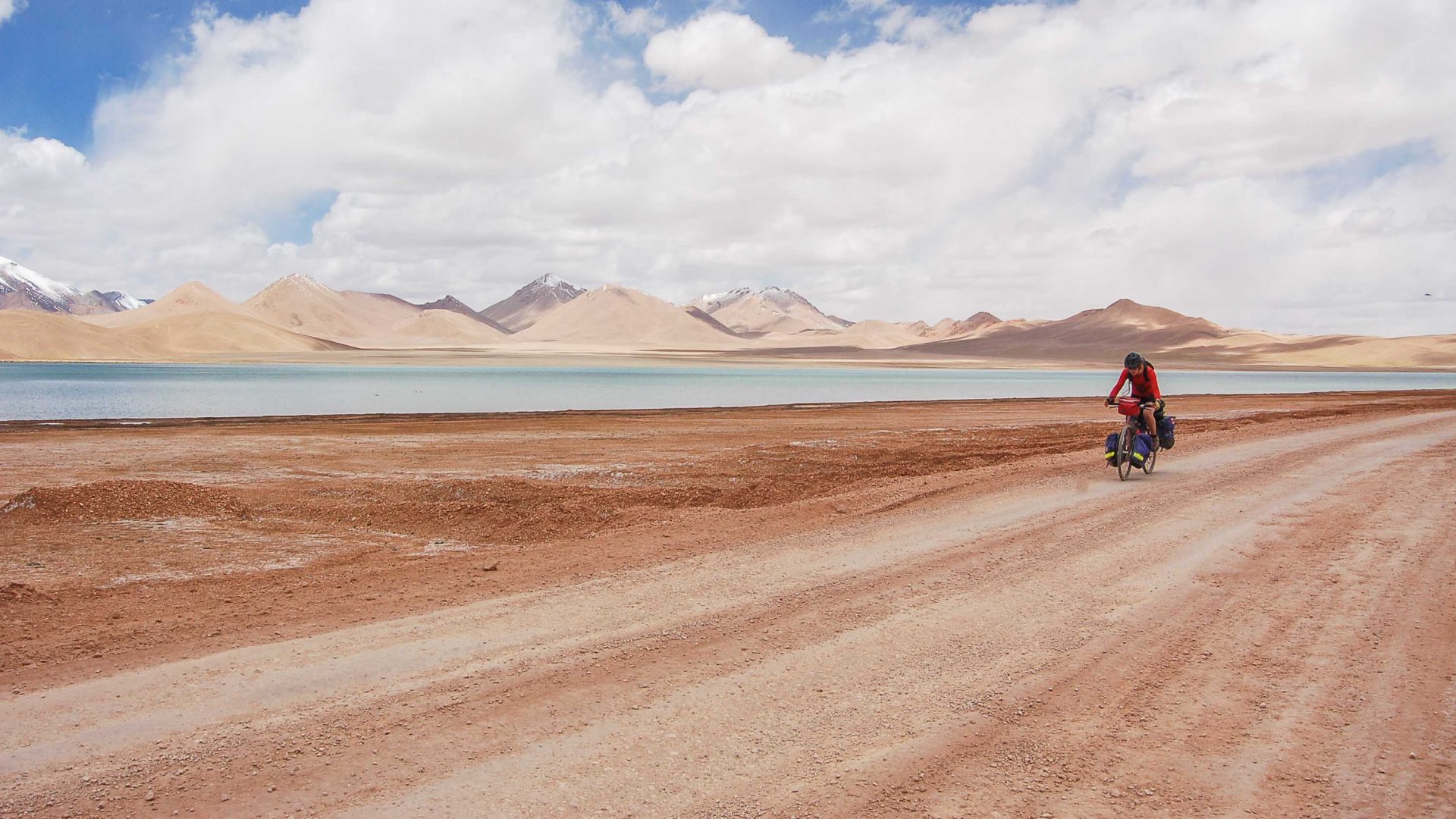 What does the Silk Road have to do with Mars, except everything?