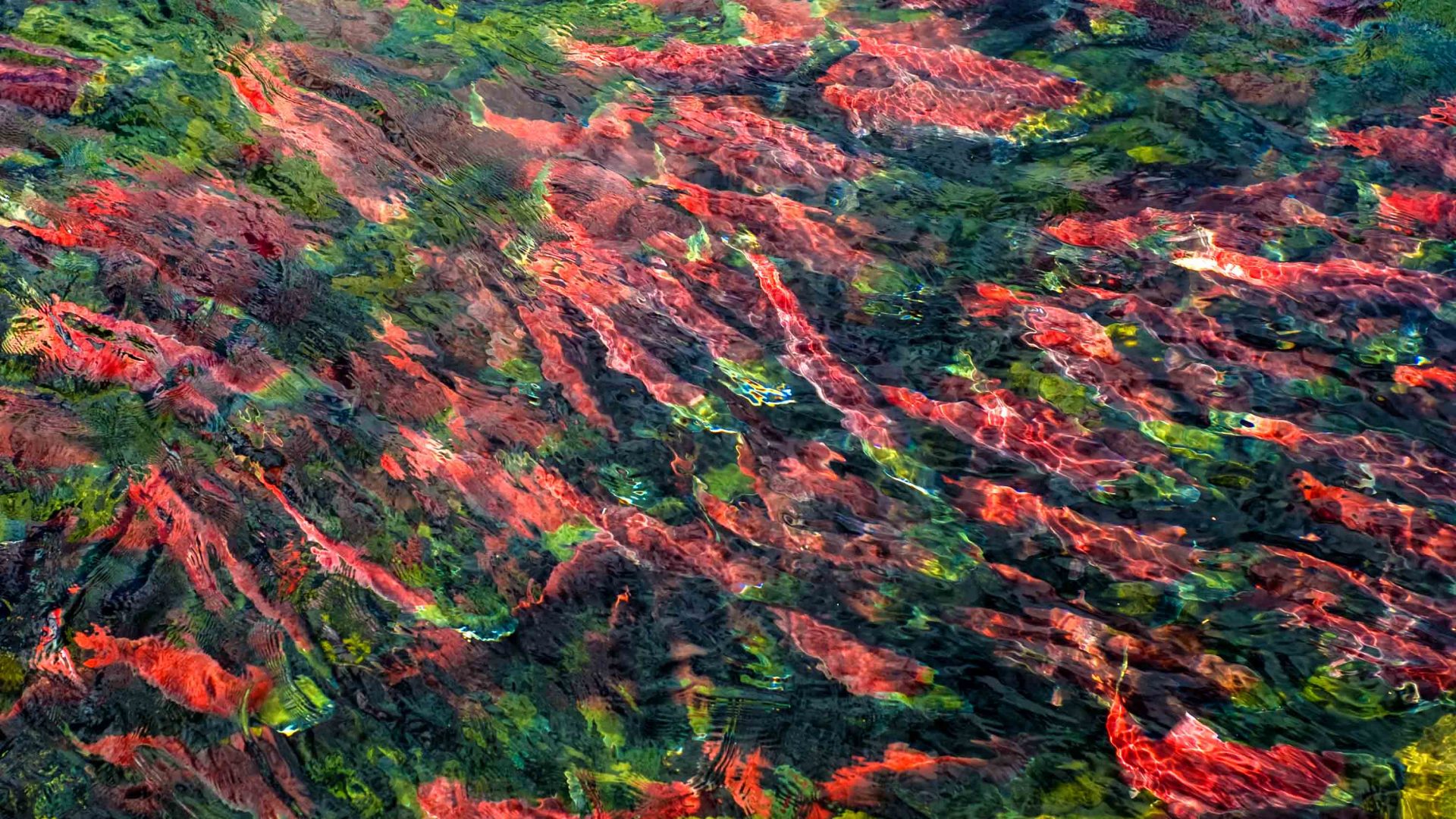 Every year, millions of salmon battle their way up British Columbia’s Adams River in a spectacular display of life and death. And as the salmon run, the locals celebrate and the tourists flock.

It’s a fight for their lives. Picked off by bears, coyotes, eagles and fishermen, it’s no easy feat for the sockeye salmon of British Columbia to return to their place of birth to spawn—in fact, it’s a 460-kilometer upstream battle back to the Adams River at the end of their four-year life cycle.

And for locals, it’s one of the most important events of the year.

Every fall, around mid-October, the Adams River in the Shuswap region, turns red with the migrating salmon. Every fourth year is a dominant year of the cycle, and 2018 is set to see a record number of sockeye—an estimated 25 million—make the run, all the way from the Pacific Ocean to interior British Columbia.

You know the salmon are returning when First Nations bands start telling salmon stories and performing salmon-themed dances and songs. The species is integral to their culture—and celebrated as such.

“Every four years the salmon gives its life for us to survive, so we want to make sure that we honor it,” says Frank Antoine, an Indigenous guide for Moccasin Trails from the Shuswap Nation as we canoe along the South Thompson River in nearby Kamloops, where the North and South Thompson rivers meet. “It’s like having your children leave for four years and then come back from university. It’s an appreciation; and hopefully it’ll be passed down to the next generation.”

We don’t see any salmon while paddling the South Thompson, but occasional splashes remind me of their presence. I do, however, see plenty the following day when I visit Adams River. And you’d expect nothing less from one of the most important sockeye breeding grounds in North America.

The salmon migration starts off the coast of Vancouver, at the mouth of the Fraser River. Over an average of 18 days, the salmon stop eating, lose their scales, bruise their flesh, and turn a magnificent scarlet-red. Once at the Adams, they spawn and then die, their bodies inevitably feasted on by prey in what is a wonderful example of the circle of life.

Salmon is even sold as dried slithers and candied morsels at airports … I’d go as far as saying it’s just as much a part of the Canadian national identity as maple syrup.

It’s a fascinating phenomenon and every year, hundreds of people descend on Tsutswecw Provincial Park (formerly Roderick Haig-Brown Provincial Park) to witness it. Their visit coincides with Salute to the Sockeye, a festival that’s held every four years where stalls sell salmon-themed artwork, smoked salmon, and clothing with salmon motifs. The best time to see the river run red fluctuates slightly every year, but even if you miss the peak, you can still expect a salmon bonanza.

A main path from the park to the Adams River overflows with tourists all vying to see the water turned crimson. As I jostle for space on a forest path on the riverbank, I watch seemingly robust fish jump across the rocky riverbed. Some display impressive bouts of energy, while others are clearly on their last breaths, resting in pockets of deep water.

Behind me, Guy Scharf, from Fisheries and Oceans Canada, captivates a group young children as he dissects two salmon on what looks like a rudimentary operating table.

Flesh, blood, teeth and body parts unidentifiable to the uninformed eye are spread out neatly during this open-air biology lesson. Further along, children in gumboots play at the river’s edge, while tourists attempt to capture photos of the fish beneath the water’s rippling surface.

We don’t see any fishermen on the river here because the salmon are well past their prime. Their journey through rapids and waterfalls has rendered their flesh soft and unpalatable, and, as Frank says, when they reach the Shuswap it’s time to honor them.

Salmon are, however, readily enjoyed at other times during their lifecycle and are an important fixture on the dinner table during indigenous ceremonies.

The importance of salmon of any species in Canadians’ diets stretches far beyond its First Nations peoples. Right across the country, in grocery stores, restaurants and markets, salmon is prominent. It’s even sold as dried slithers and candied morsels at airports, an interesting souvenir for travelers clinging onto Canada’s flavors. I’d even go as far as saying it’s just as much a part of the national identity as maple syrup.

That’s one reason why Don Paterson, president of The Adams River Salmon Society, is so passionate about protecting salmon. “Salmon conservation is interesting because it is the same as for the bees,” he explains when I catch up with him during The Salute to the Sockeye festivities. “If you have an extinction-level event with the bees, then there goes at least a third of your food supply. Period. Not negotiable. And the same is true of the salmon … if something happens to them, then an awful lot will happen to the environment.”

The warming of ocean water, spread of ocean plastics, and water and light pollution all impact on wild salmon populations, resulting in fewer salmon hatching—let alone beginning their homebound journeys.

Don has cause to be concerned. Although the number of sockeye returning to the Adams River naturally fluctuates season to season, there is evidence of fewer salmon in Canada’s rivers overall. As a result, the society has ramped up collaboration with government departments and universities.

Recreational fishermen, such as Frank, are also taking action. It’s not uncommon for Frank, who’s been fishing since age four, to trade a bounty of British Columbia salmon for an elk carcass from a hunter in the Rocky Mountains.

RELATED: The fly fisher on a mission to get more women on the water

But bartering is becoming more difficult due to what Frank believes is a result of overfishing—both commercially and recreationally. “In the last two years, it’s been harder to gather that fish, so I’d rather leave them in the water,” he says. “You have to give and take, right?”

Both Frank and Don agree salmon farms are also an issue on Canada’s West Coast, with the risk of disease spreading to wild populations, affecting mobility and increasing the risk of predation. But there’s more to it.

The warming of ocean water, spread of ocean plastics, and water and light pollution all impact on wild salmon populations, resulting in fewer salmon hatching—let alone beginning their homebound journeys.

What’s happening is being described as a major ecological shift, but the casual observer at Tsutswecw Provincial Park—whether local or tourist—is likely to be unaware of the salmon’s plight. For them, the sockeye salmon, gathered here to spawn and die in their millions, are putting on a hell of a show.

Learn more about visiting the Adams River Salmon Society and plan an Indigenous experience in British Columbia with Frank Antoine and Moccasin Trails.

Starting her career in Sydney radio, Jennifer Ennion has worked as a politics and crime reporter, a snow reporter, a news sub-editor and a travel editor. She now happily divides her time between travel writing and TV news reporting. 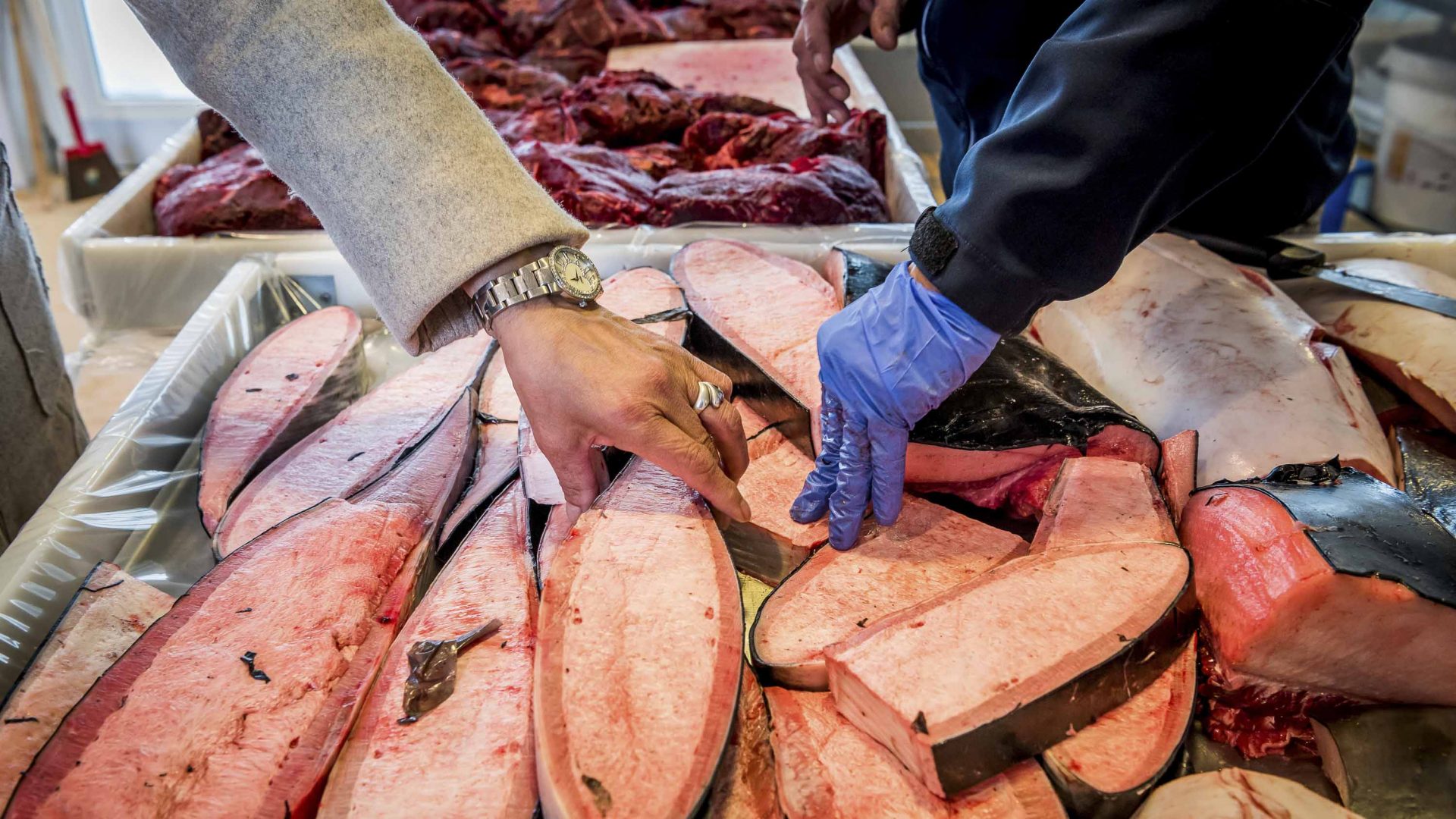 Seal soup for dinner? Get to know Greenland’s Inuit cuisine