It’s regarded as the hardest hike in Britain, thanks to its unsigned trails, often-vile weather and total remoteness. So how did solo walker Luke Waterson fare on Scotland’s Cape Wrath Trail?

If the otherworldly place names and landscapes along Scotland’s Cape Wrath Trail conjure scenes from Game of Thrones or Lord of the Rings, that is apt: It was holidaying in Wester Ross that sparked George R. R. Martin’s imagination into creating the fantasy world of Westeros, while gazing out at the Small Isles supposedly gave Tolkien inspiration for the Mountains of Mordor.

This 200-mile, two-to-three-week tramp up the rugged northwest edge of the Highlands whets hard-core adventurers’ appetites. Morar, Knoydart, Assynt … the nation’s most grueling trail passes places so remote, many are known simply as wildernesses—because there are no settlements worth noting within them.

Traversing such emptiness, this hike claims numerous superlatives: Britain’s remotest village, highest waterfall, remotest beach and highest mainland sea cliffs, Europe’s oldest geological formations. But while all these held allure, my main motivation for taking on this trek was absence. Roads do not peter out up here—they scarcely exist anyway. The trail is not uncrowded—it is almost utterly unpeopled. And absence makes the heart grow fonder. If one wished to truly escape within Great Britain, this would be it.

The ferry from the tourist town of Fort William to Camusnagaul, a solitary pier on the far side of Loch Linnhe marking the trail’s start point, is poignant. It is less about the smorgasbord of mountains, including Ben Nevis, opening up on the crossing, but more the knowledge that by undertaking this hike, you are ditching civilization definitively for over a fortnight. Until you reach the Cape Wrath lighthouse on a cut-off headland at the official finishing post, nature assumes control, beautifully and brutally.

Several things make the Cape Wrath Trail Britain’s toughest. The first: You have to carry full gear … The second: Some of Britain’s vilest weather … And finally, the way-marking: There is none.

As I set off, despite enthusing over the path ahead, it’s hard not to ponder. Will I be all right? Would I make the next settlement before nightfall? (Answer: No, I would often have to sleep in middle-of-nowhere bothies or in my tent, however damp it became). Would there be places where I could replenish provisions, or charge my phone, or pass the time of day with other hikers? (Answers: sporadically, few and seldom). I ferret urgently through my belongings, prepared meticulously yet suddenly seeming inadequate, re-checking to see if I really do have everything it would take to survive out here.

Several things make the Cape Wrath Trail Britain’s toughest. The first: You have to carry full gear, something that’s not applicable on almost any other UK hike. You’re required to sleep and eat in the wild for much of the adventure, because the ends of each day’s walking do not coincide with guesthouses—or indeed with anything at all.

The second: Some of Britain’s vilest weather (alongside a major paucity of shelter en route). And finally, the way-marking: There is none. You must be able to navigate with a compass, cross waist-deep rivers which often lack bridges, and find your way though blanket bogs and over wild uplands without paths to assist.

Striding out from Camusnagaul, such thoughts play on my mind. Already, the terrain seems to be asking questions of me, sheering away, via ruined crofts and tumbledown fences, into uninterrupted moor and forest, as if to emphasize that it could not be tamed—not by me or by anyone. Fort William’s bustle is two miles distant but already feels half a world away, as hills encroach and buildings of any kind soon disappear altogether.

I stoop to cut a staff from a fallen tree branch. At Inverscaddle Bay, before the path passes the last house until arriving a day’s march later in Glenfinnan, I pause to skim stones. Little ways, perhaps, of pretending I have some impact amid this vastness. But beneath the increasingly big, daunting backdrop, for all my six-feet-three-inches, there’s little denying my increasing insignificance.

Nothing but wet: A fitting description for the sopping, bog-ridden, loch-riven world through which the Cape Wrath Trail wends.

A broad track cuts up the first of the trail’s many glens, Cona Glen. But just as I start believing that with such a steady path, stories of the tricky navigation might be over-exaggerated, this track fizzles onto indistinct moor in gathering clouds. Time for the first compass bearing, and then the first water bottle refill from river rather than tap. And I relax.

Or rather, as I ascend into mist having made the call on which direction was correct, I feel I’ve passed my personal point of no return. I have a narrative now that’s not merely one of leaving civilization for wilderness, but of fending for myself in the wilds. In a densely populated Britain, where roads or houses or partitioned agricultural land are seldom out of sight in any horizon, such self-sufficiency seems a rare gift.

And so I reach Glenfinnan, the next village along after a day of hiking. This is where Bonnie Prince Charlie once raised his standard to initiate the Jacobite Rebellion and where today, tourists raise their cameras to snap the steam railway now synonymous with the Hogwarts Express from the Harry Potter films. It’s no welcome rest-stop, but an obtrusion. Its few houses and train station render it quite the metropolis—and I want to be back alone in the hills.

I meet some German hikers outside the village; they’re on the final leg of the trail I am just beginning.

“You are so lucky,” they say, in reference to the single ray of sunshine piercing the rain clouds. “We had nothing but wet for two weeks.”

Nothing but wet: A fitting description for the sopping, bog-ridden, loch-riven world through which the Cape Wrath Trail wends. The route’s wetness enhances its isolation, putting villages and roads that are not so far as the crow flies, umpteen miles beyond reach of the walker around lakes or estuary shores.

I sleep that night high above Glenfinnan, content to evade its creature comforts; warming myself in the embers of the bothy fire and poring the map of tomorrow’s route by torchlight.

Dawn brings more sunshine that, with uncharacteristic steadiness, keeps shining most of the following fortnight. A stroke of luck for me, for it is weather that prevents most from completing this trek.

I get shin splints on stage five, forcing me to rest a day. I miscalculate, descending a pass above Kinlochewe and walk 10 extra miles along a road in darkness, penance for my error. Otherwise, my concerns in life are blissfully reduced to how to descend a steep valleyside or whether to linger on a hilltop watching deer herds obliviously grazing. And the landscapes expand, to the stark, lunar-like rock formations above the village of Inchnadamph to the humbling thunder of the tide on huge, empty Sandwood Bay.

On the seventeenth day, I break camp before first light and clamber over pathless headlands onto the Parph, the tract of nothingness leading up to Cape Wrath itself. There’s moor, as usual, and more moor. And suddenly, swooping out of the green and gray, the white outline of the Cape Wrath lighthouse. With a tempestuous sea crashing against 280-meter-high cliffs and just this one man-made structure in a 100-square-mile expanse, this is one moody spot, named from the Old Norse hvarf or ‘turning point’, where Viking ships once turned their vessels for home.

It’s moody for sure, but I no longer find this landscape daunting. It’s there and I’m there and that is it.

I take off my shoes and socks, and drain out the bog water. I had arrived. 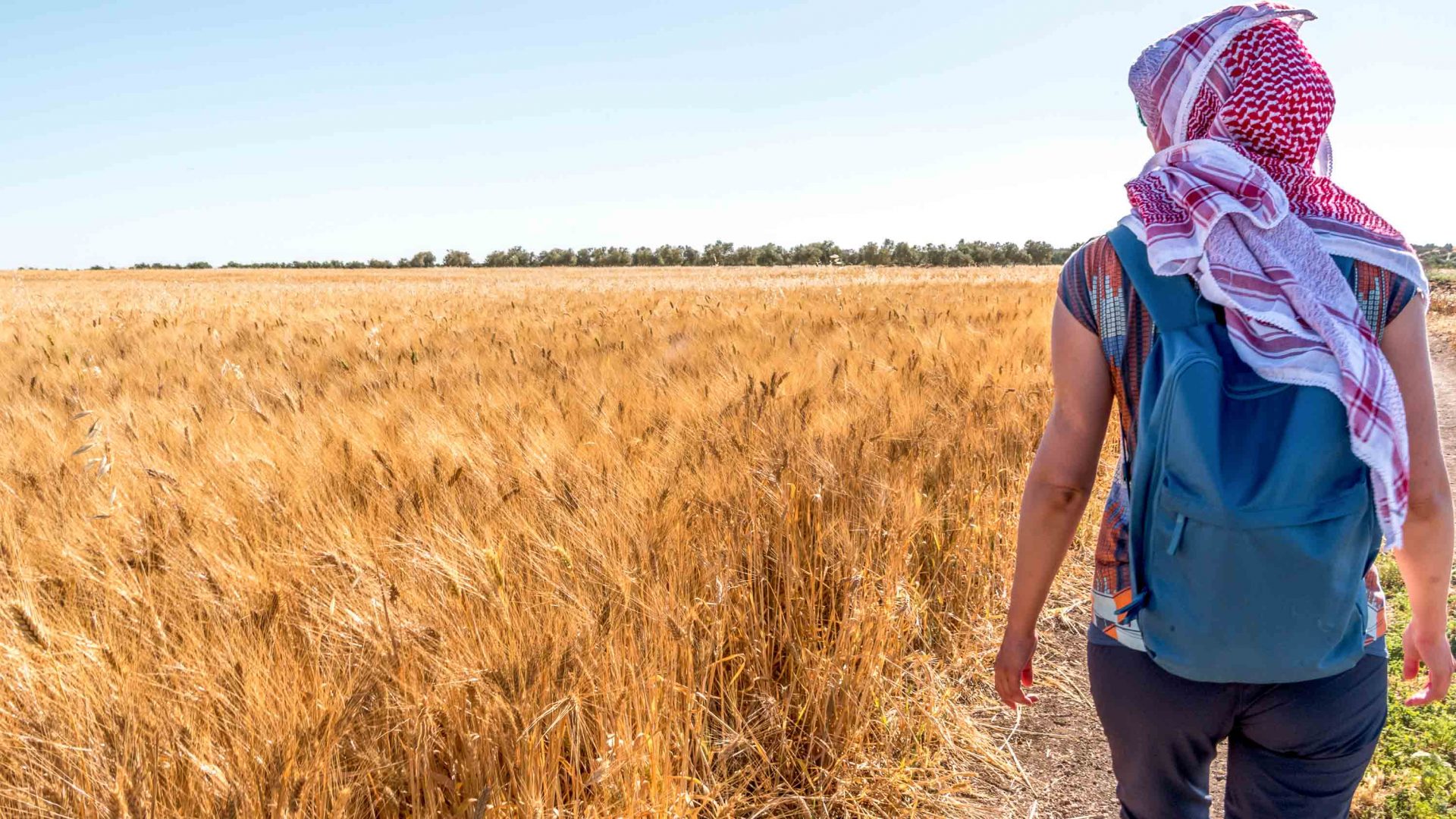