The travel industry is failing its mountain porters—what can travelers do about it? 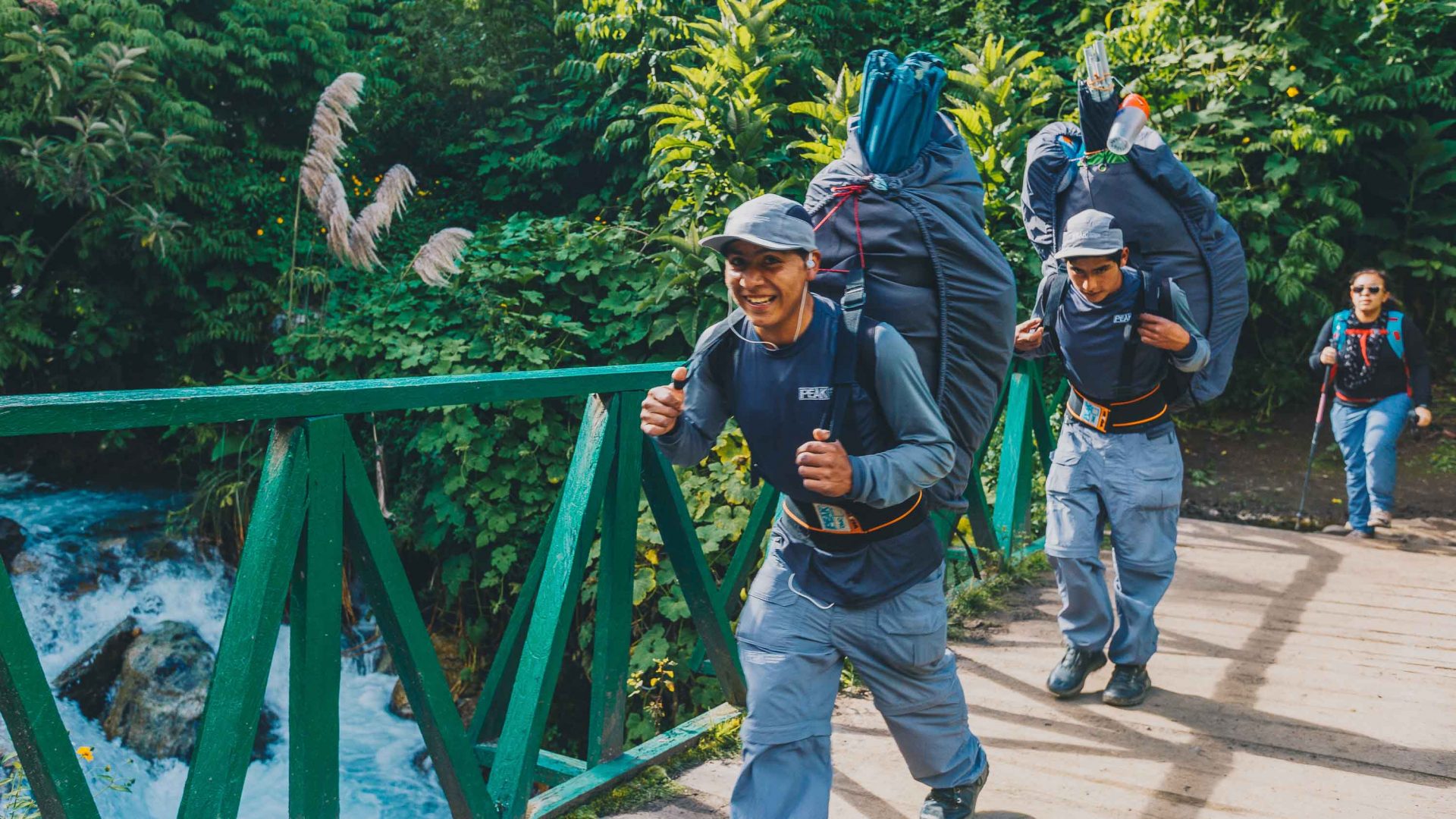 Since commercial travelers first began trekking the world’s trails, porters have been the unsung heroes of the industry. Now, a global research project by The Intrepid Foundation aims to shed light on the issues they face in a bid to affect positive, industry-wide change.

In 2016, Belgium-based physiologist Norman Heglund flew to Nepal to figure out how porters walk. It was, at the time, a mystery.

Heglund had spent years studying the Kikuyu women of Kenya, who are famous for carrying huge loads on their heads—often 20 per cent of their own bodyweight. But Himalayan porters had been clocked at 125 per cent bodyweight, which seemed to defy the basic laws of biomechanics. No-one could walk with such weight, reasoned Heglund, and still have knees.

During his time with the Kikuyu, Heglund discovered a unique, rolling, pendulum gait, which allowed them to conserve energy. Under the right conditions, a heavy load actually made Kikuyu women walk better.

But when he measured Nepali porters, he concluded there was nothing. No secret. They just trudge, slowly, and with great patience, and they often don’t stop walking until they reach their destination. Carrying loads of up to 120 kilograms. “They accomplish all this without any mechanically determined tricks,” Heglund wrote. “It’s an unimaginable feat.”

Heglund’s study was one of the first serious academic probes into the day-to-day life of porters. But it only raised more interesting questions about porters on a global scale: Who are they? Where do they come from? Are they being paid fairly? What’s their health like? Are they happy? How many are there?

The answer? Nobody really knows.

With the growth of adventure travel over the last 10 years (the global market is expected to tip $1,335,738 million by 2023), demand for qualified porters has boomed. Porters are the backbone of Nepal’s billion-dollar trekking industry, which accounts for 7.8 per cent of national GDP.

There are porters hoofing the Atlas Mountains and plodding along the Inca Trail. They summit the likes of Kilimanjaro and Kinabalu without batting an eyelid. Every week, porters risk their lives in Pakistan’s treacherous Karakoram Range (where life insurance policies often cap out at $1,500). Many have died in the mountains, or been left behind during blizzards while travelers are helicoptered to safety.

Learning more about porters isn’t easy. For starters, they’re usually paid in cash, and conditions and cultural backgrounds vary wildly from country to country. Child labour is not uncommon. It’s a complex, politicized and heavily unionized industry, hard to regulate or measure on any global scale, full of small-time, local tour operators and (almost by definition) a largely itinerant workforce. Porters never sit still for long.

David Mtui started climbing when he was 15, hefting 32-kilogram packs up and down Kilimanjaro’s popular Marangu route. It’s a six-day, 140-kilometer round trip through montane forests and icy moorlands. He was paid $7 per trek. “I was the tallest,” he laughs down the phone, “I was very tall. So the ranger sees me and says, ‘Hey kid, you want to climb?’ Here we start early, very young, because my life was not good, and my family did not have much, so I started to climb to bring them money and help them buy food.”

Mtui, who now works for the Kilimanjaro Porters Assistance Project (KPAP), a non-profit that supports fair treatment of porters, says that there are around 300 trekking companies in Tanzania now. But while more companies mean more jobs, those jobs aren’t always all they’re cracked up to be. “Many porters climb on the mountain and work hard, but they don’t get enough salary,” he says, “They don’t get tipping from clients, they don’t sleep in a good tent, and they don’t get three meals a day. That’s why KPAP is here, to help change the lives of porters.”

For the first time ever, porter wages, welfare and training in these four countries will be put under the microscope. The results are due to be released in June 2019, and could have an enormous positive impact on the wider trekking industry and the treatment of porters. “It’s a very, very sensitive area,” says lead researcher Jo Chaffer. “We need to tread carefully. There’s a lot of political activity, and no matter where you go, it’s heavily unionized and politicized. Sometimes that works for porters, and other times it works against them.”

Chaffer says regional differences also make it tricky to implement any one-size-fits-all porter policy. Motivations vary. Some porters are drawn by family ties or adventure, others by the simple lure of quick cash. In Peru, mountain villages often send groups of porters, and the job carries a certain professional glamour. In Tanzania, the unions are much stronger; porters often find their way into the profession via friends or word-of-mouth. Nepal is actually seeing an influx of female porters for the first time, as young Tamang and Sherpa men chase low-paid laboring jobs in the Gulf States.

In Chaffer’s eyes, the overly-empathetic “noble savage” idea that some Western travelers readily apply to porters isn’t all that helpful, or accurate, either. “People think, ‘Here are these poor Nepalese people carrying heavy stuff, we need to help them’, but it’s much more complicated than that,” she says. “Portering in many parts of the world is a valuable and respected way of life. It’s got as many plusses and minuses as other manual jobs, especially for people with low literacy or no special skills.”

Portering also allows porters to stay and live in their villages, which is no small thing considering the huge rates of urbanization. It enables money to flow back into the mountains, families to stay together, and schools to stay open. “We’ve come in with a ground-up approach: No hypothesis or model to test, just questions to ask,” says Chaffer. “What emerges is what creates the model.”

“In an ideal world, we want to get the industry to move towards a global policy for porters. And not just about working conditions and equipment, but also career progression. What education do they need? How can we help them develop professionally and increase their earning potential?”

Those questions are detailed and wide-ranging. Chaffer and the team have collected vast spreadsheets of data—basic stats on age and gender, as well as more open-ended information such as motivations, and their hopes and fears for the future.

Researchers sat down with porters and asked them questions, such as: What do you like about the job? What don’t you like? What are the biggest challenges? The results were mixed. While many porters enjoyed the fresh air and mountain adventures, some were less happy about pay and distribution of wages. It’s a problem that KPAP’s Mtui has observed first-hand: “The clients, they give the guides tips, so when the guides get tips, they give some to the porters, maybe TZS3000 (just over USD$1) in total,” he says. “The rest goes straight into their pocket.”

The Intrepid Foundation says the porter project is about getting the travel industry to take some gritty, look-yourself-in-the-mirror responsibility. To re-evaluate and improve policies that have been neglected for far too long. “There are two reasons for doing the study,” says Intrepid Foundation GM Robyn Nixon. “One is based on the fact that we know, in certain parts of the world, porters are often mistreated. We wanted to get a global understanding of what the situation is: The good, the bad and the ugly. We already have a porter policy, but we wanted to test if it was really working at a ground level. The second reason is to get other travel companies to do the same.”

Through its various destination management companies, Intrepid contracts approximately 560 porters in five countries (Papua New Guinea, Tanzania, Borneo, Nepal and Peru). As a collective, they’re one of the biggest trekking providers on the planet.

But Nixon says being the biggest carries certain responsibilities, like lobbying hard for industry change, even when it’s uncomfortable. “In an ideal world, we want to get the industry to move towards a global policy for porters,” she says. “And not just about working conditions and equipment, but also career progression. What education do they need? How can we help them develop professionally and increase their earning potential?”

As part of their awareness campaign, The Intrepid Foundation is launching the Step Up for Porters Challenge: A fundraising initiative to engage trekkers and raise money for porter welfare. It’s for anyone with an interest in doing good and getting fit, with a goal of at least 10,000 steps per day, per participant, over the month of June.

According to Chaffer, it’s travelers who hold the most power for change. “People who porter are the same as you and I,” she says. “They want the nice things in life. They’re curious. We need to encourage trekkers to be curious too: not just turning a corner and saying, ‘Wow, there’s Everest!’, but actually talking to your porters. Learning from them. Suddenly you’re opening up a whole world of possibilities.” 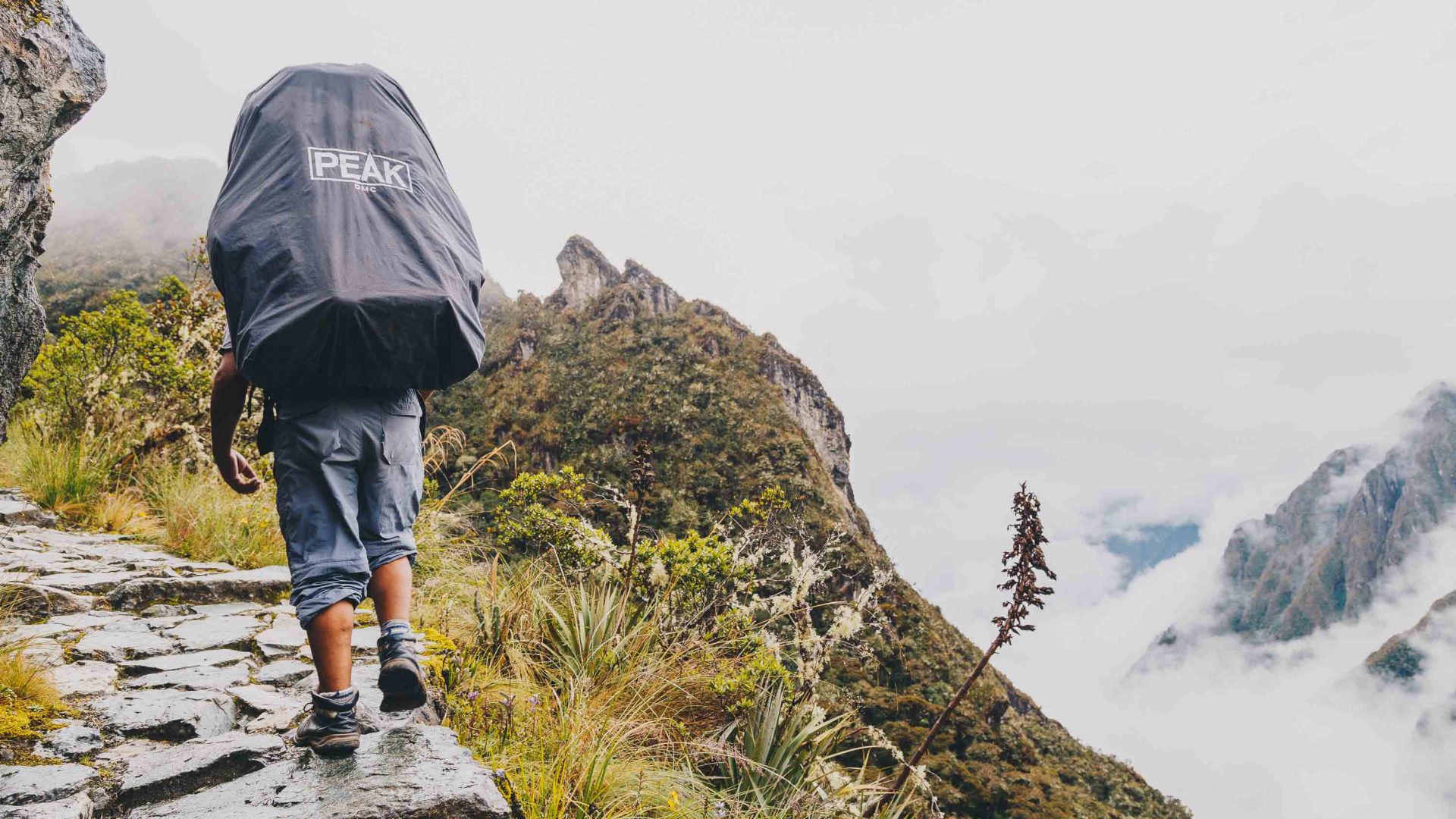 This porter has hiked the Inca Trail hundreds of times, but never seen Machu Picchu 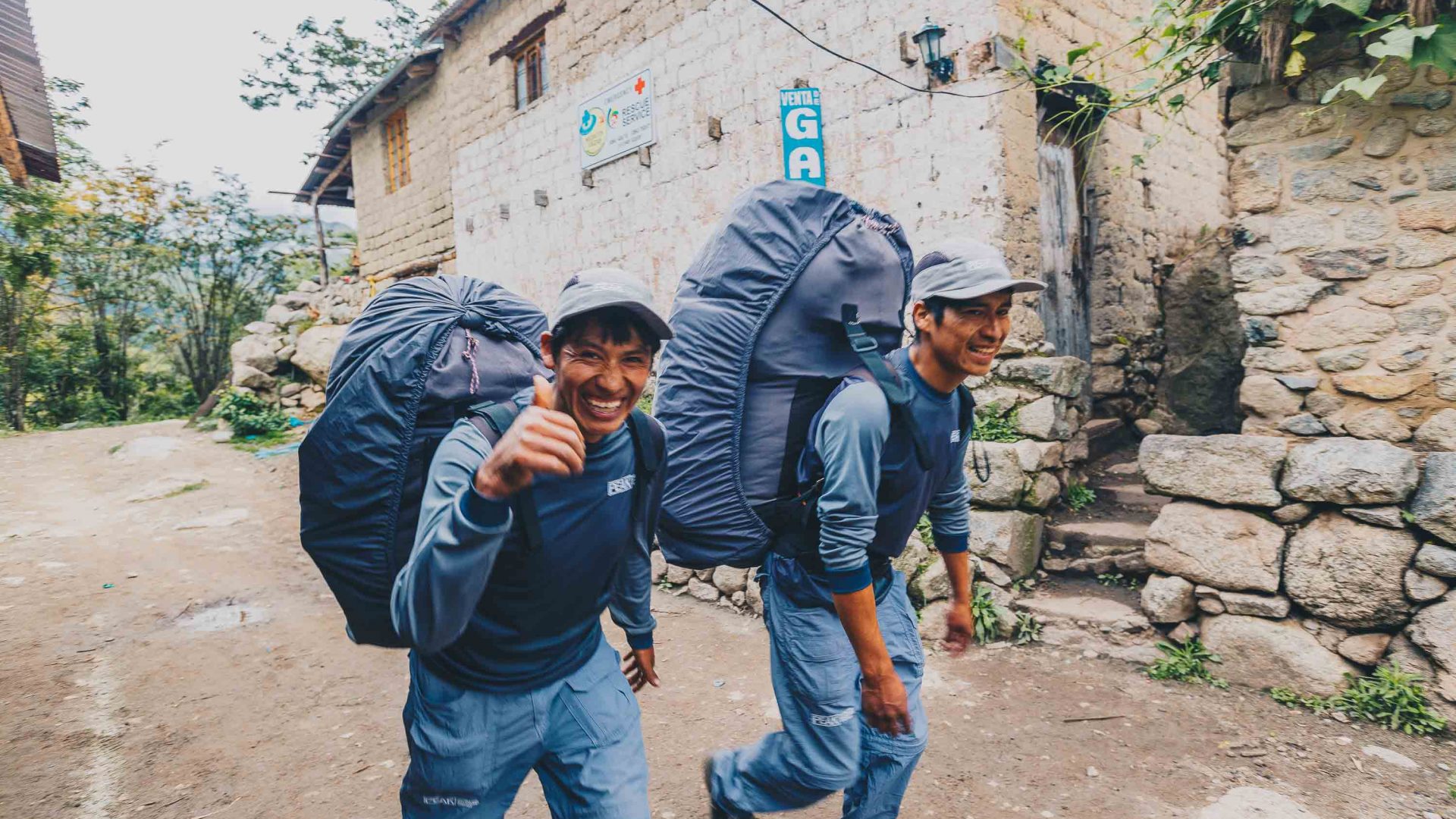 Will you step up and help improve the lives of porters this June?