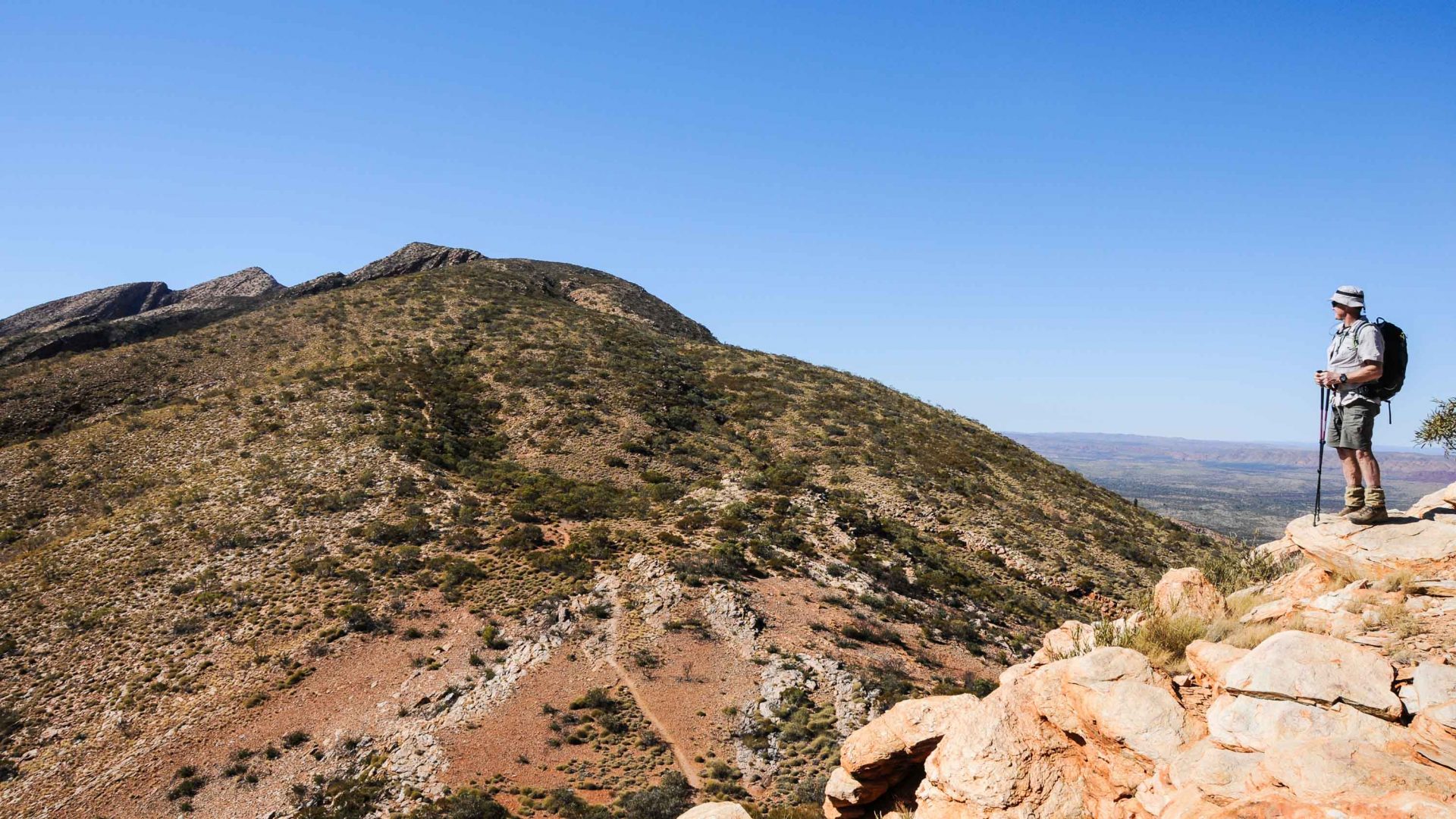 Close to 20 years after he first traversed—and fell in love with—Australia’s 225-kilometer-long Larapinta Trail, adventurer Huw Kingston revisits the Northern Territory to see if the trail still holds his gaze.

“Bad country, bad country.” These were the only words the old Vietnamese man mustered as we flew across Australia.

It was the ‘80s and he was moving to Australia as a refugee, leaving behind the troubled tropical lushness of Vietnam, while I was returning from a trip to India. For some hours now, all he had seen of his new home was the desert.

I tried to explain the landscape would change when we finally reached Sydney and the east coast. But his fear and my incomprehensible language just had him shaking his head in disbelief and repeating his mantra: “Bad country, bad country.”

Now, nearly 30 years later, I’m high above those deserts again, flying west across them from Sydney to Alice Springs, to spend some time on the Larapinta Trail (‘Larapinta’ translates to ‘salty creek’ in the local Aranda dialect)—which is now billed as ‘one of Australia’s most spectacular bushwalking and trekking experiences.’

Waves of red sand line up below me but unlike their ocean counterparts, these waves break into nowhere. Then, approaching Alice, mountains appear; real mountains. First the ridges of the East MacDonnells, then, as the plane banks, the long line of the West MacDonnell Range, including Mount Sonder and solitary Mount Zeil, the highest point in the Northern Territory.

Close to 20 years ago, before the Larapinta was fully signposted and complete, I walked the length of the range. That hike was part of a long journey walking and riding a rather circuitous 5,000 kilometer route from Perth to Adelaide. After weeks in the relative flatness of the desert, those mountains took me by surprise and, relishing the rocky scrambling and lofty viewpoints, left me feeling refreshed, as mountains invariably do.

Now, I’m sampling a mere five days on the trail—but it’s not long before the Larapinta has me in its thrall once again. Because here is a range that challenges anything Tasmania or the Australian Alpine high country offers: Airy ridges, deep red rock gorges, mountain amphitheaters and rivers snaking through it all. Trees—the white-trunked ghost gum and scrubby mulga—offer shade while pale green spinifex grass lies in wait—ready to spike anyone who ventures off the trail. It draws blood from my uncovered legs more than once.

‘Riverbeds’ is perhaps a better descriptor for these rivers: For most of the year, the Finke, Hugh, Ormiston, Redbank and Davenport watercourses are better suited to beach volleyball than swimming. But deep gorges in many of these watercourses often hold shaded waterholes, where ancient cycads sprout on their banks and fleet-footed little rock wallabies scamper with ease on ledges high above the water. They must look with disdain at their fellow bipeds struggling through the gorge below.

The traditions and culture of Australia’s first peoples are so far removed from our own that it behooves us all, Australians or visitors, to try and understand just a little.

These waterholes refill when those elusive big rains fall and it is only the brave or foolish who dive into the ice-cold waters. I leave my swim to the final day of our journey, when July daytime temperatures are set perfectly in the low- to mid-20s (Celsius). The water temperature, however, is in single figures and the term ‘swimming’ is an exaggeration for my brief dip.

The easternmost point of the Larapinta Trail is the Old Telegraph Station, a mere three kilometers from the center of Alice Springs, with the westernmost end at Redbank Gorge, 160 kilometers west. The beauty of the trail is that you can walk its entirety for two weeks or more, or easily access it for shorter sections and day walks from different entry points.

RELATED: How tough can ‘Britain’s toughest trail’ really be?

At Standley Chasm, we sit for nearly three hours as Dea Mack, a guide from Cultural Connections NT, does her best to bring us up to speed on 60,000 years of Aboriginal life across Australia. “The power is with the listener,” she says. Any journey in Australia is enriched by some understanding of cultural history, and a session with Dea is a fantastic way to gain some. Dea brings us back to the local area, to the local people; the Aranda people. Her people.

She tells us how her father had worked on cattle stations and took on the ways of his employers, while her mother held on tightly to the traditions of her ancestors. Dea herself came back to these traditions only in her adult life; realizing she needed to connect to the endless centuries of learning in order to reconnect to her country.

We learn a tiny fraction of these traditions. The culture of Australia’s first peoples are so far removed from our own that it behooves us all, Australians or visitors, to try and understand just a little; to try and view life from a very different perspective. “You won’t see us looking at you,” says Dea. Eye contact in the western world is considered polite in conversation, but for Aboriginal people, the opposite: Avoidance of eye contact is a sign of respect.

From any high point on the Larapinta, Australia stretches endlessly away. Here, the enormity of this country is laid bare.

Being our first day on the Larapinta, this knowledge provides context for the rest of the week. We camp for two nights at Ormiston Gorge, where guides Danny and Nathan look after us. Danny, all dreadlocks and earthy clothing, almost merges into the landscape as he calmly travels through it.

This, even when laboring under a massive pack that contains a billy (kettle), coffee plunger and enough water to brew up for the dozen in our group plus the scones, jam and cream for morning tea on the day we climb Mount Sonder. Nathan, on the other hand, is clean-cut, clean-shirted and always ready with a smile.

Mount Sonder, at 1,380 meters, is the highest point of the Larapinta Trail. Many climb it in the dark to watch sunrise from its summit but this time around, we’re content to have lunch on the top as sand-colored lizards shuffle over the rocks clattering under our feet.

From any high point on the Larapinta, Australia stretches endlessly away. South toward Hermannsburg, just in view, and beyond toward Kings Canyon and Uluru. North away into the Tanami Desert. Here, the enormity of this country is laid bare.

The Larapinta may have become more defined—like much of the world—since my first visit; the signposting more regular. But the landscape is as miraculous as it ever was; the local history just as fascinating. And anyone navigating these trails for themselves must come to the same conclusion: This is good country … Good country.

You can fly to Alice Springs from any major Australian airport. The cooler months from May to August are the best time to walk the trail; summer is far too hot. Larapintatrail.com.au is the most comprehensive resource for the trail. Dea Mack of Cultural Connections NT runs a variety of cultural awareness sessions and tours. 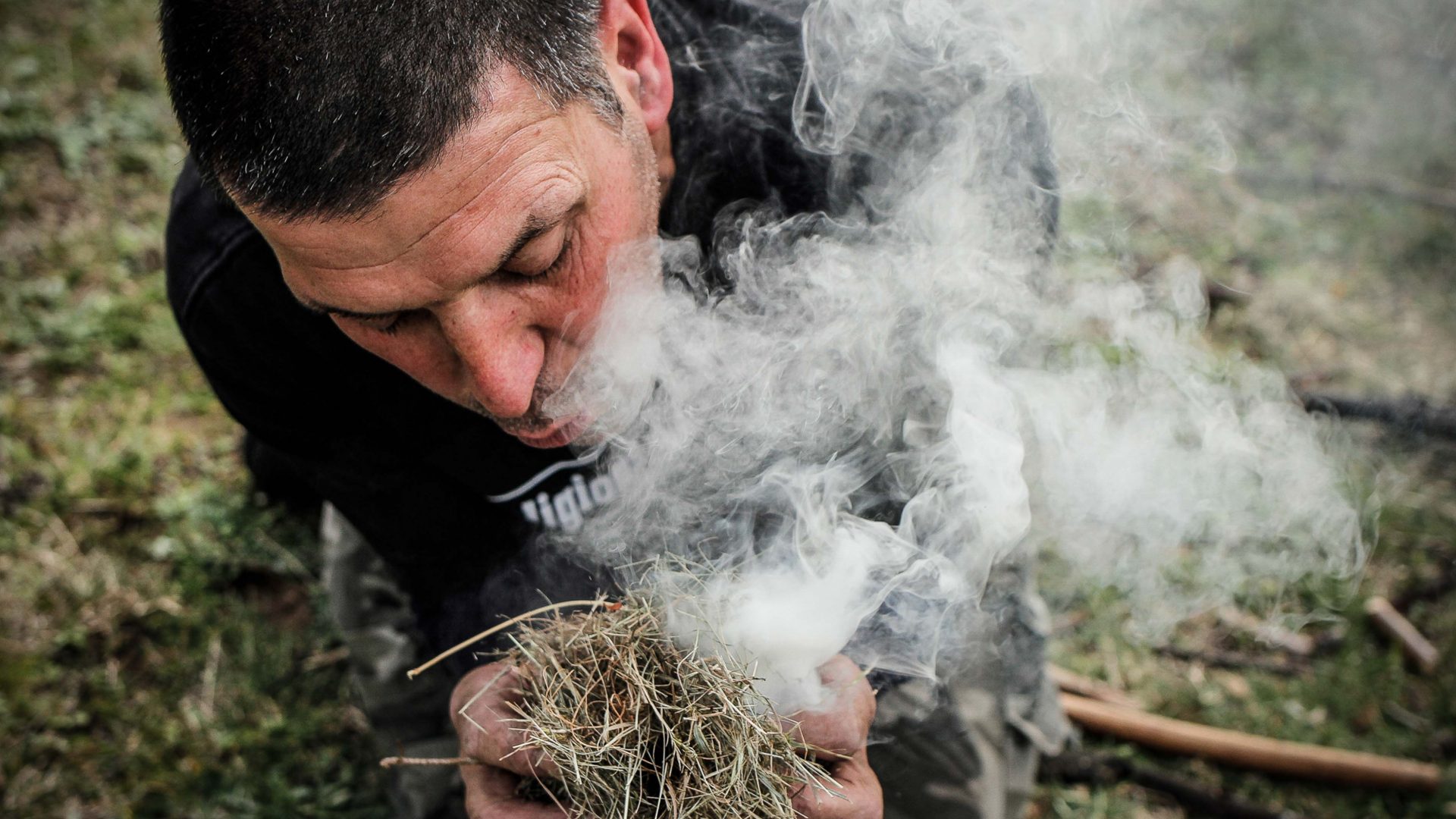 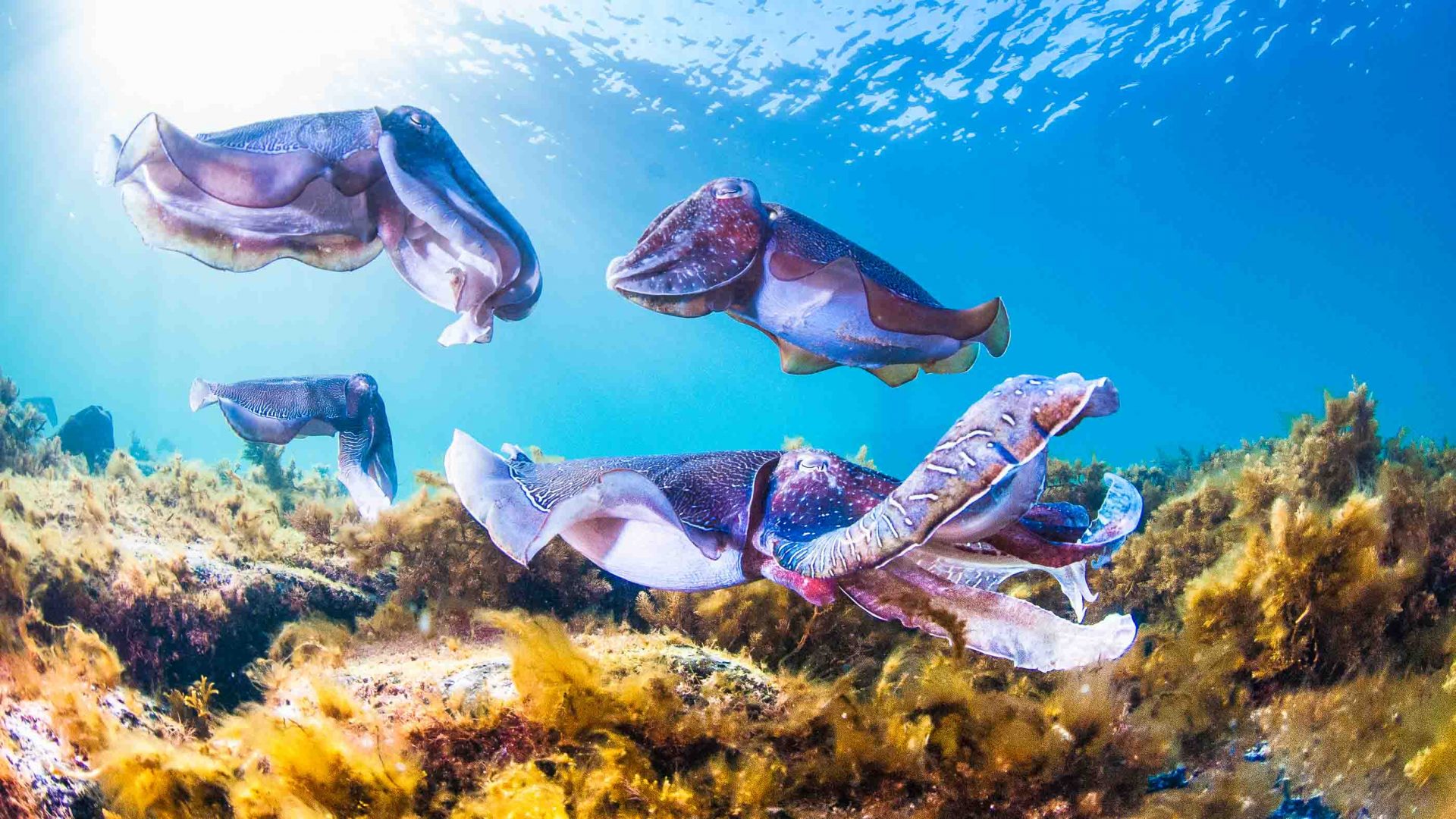