Once the heart of America’s Gold Rush frontier towns, only a handful of genuine saloons are left standing. During a road trip across the States, Shoshi Parks finds much more than just beer and liquor inside them—she finds a window to the country’s past.

The wind is howling when I park my car on Leadville, Colorado’s, main drag. Once a boomtown, first settled as part of a gold and silver mining rush in the 1850s, the now-quiet historic corridor is all but abandoned on this Monday afternoon.

I’ve barely crossed the street before the hail begins, massive balls of ice hurtling from the sky. Covering my head with my jacket, I run for the closest open door: The Silver Dollar Saloon.

I didn’t come to Leadville specifically for The Silver Dollar, but it was high on my list of things to see. Opened sometime before 1879, around the time mining fever took hold of this mountainous region of Colorado, the saloon is famous in certain circles of liquor-loving history buffs.

Back in the day, it had its fair share of famous visitors—‘Doc’ Holliday, the ‘Unsinkable Molly Brown’ and Oscar Wilde have all had a tipple here. But today, there’s just me and an extremely drunk local man who offers to buy me a drink no less than five times while I sit at the bar sipping my beer and taking in the decor.

The Silver Dollar’s swinging doors, mahogany bar and windbreak—the entryway structure that prevented bad weather from entering while shielding patrons from prying eyes—are all original. Diamond dust mirrors hung behind the bar made the journey from St. Louis, Missouri, by covered wagon and train car, from which two seats were removed to serve as booths in the cavernous, dimly-lit space. The walls are generously decorated in the paraphernalia of the past, all black-and-white photographs and antique artifacts.

This saloon is one of only a handful of the original Gold Rush-era bars that remain in the west, one of the last offering a distinctly American drinking experience dating back to the mid-19th century. Captivated by the gold and silver that seemed to be positively dripping from the mountains of California, Colorado, Alaska and other rugged mountainous territories far west of the Mississippi, thousands upon thousands of people showed up from all over the world. Almost overnight, small mining camps swelled into slapdash towns where prospective miners could purchase gear, a hot meal and, of course, liquor.

Liquor’s just what I need when, over 4,000 kilometers and three months later, I push my way into the Red Onion Saloon in Skagway, Alaska. I might’ve been on the road since leaving Leadville, but I still can’t resist the pull of a good Gold Rush saloon.

Because of the ruthless and down-on-their-luck characters that frequented them, there’s a sort of sinister undercurrent to the Gold Rush saloon that the typical pub lacks.

Skagway was once the jumping-off point for fortune hunters, who came here to head up White Pass to the Yukon’s Klondike where gold was first discovered in 1897. The Red Onion welcomes me with the scent of stale booze, warm, mildly inebriated laughter, and a cold IPA.

Construction on this saloon and brothel finished in 1898 in the middle of the rush for the Klondike’s riches. It was one of Skagway’s classier joints, and the building’s architectural details and original decor have been preserved—especially upstairs in the ‘cribs’, where the Red Onion’s ‘ladies of the night’ held court.

“Towns like Skagway and Dawson in Alaska, are places that really mined the miners,” says Liz Lavoie, operations manager at the Red Onion Saloon, which opened in Skagway in 1898 when the town was a jumping-off point for prospectors headed for the Klondike Gold Rush in the Canadian Yukon.

At the height of the Gold Rush, there were around 20,000 people, mostly men, in the valley but, says Lavoie, the claims were staked so quickly that a lot of it was gone by the time most hopefuls arrived. “There was very little left to be had at that point,” she says.

It’s not just that a handful of these drinking parlors survived after boomtowns went bust … it’s that they made it through 13 tee-totaling years of Prohibition.

The Red Onion and a bevy of other watering holes were a source of comfort for failed miners coming to grips with impending destitution. On the surface, those that remain today are not unique. Similar to an Irish pub, saloons typically have a well-stocked bar heavy on the whisky, entertainment, and kitschy decor hung with tongue-in-cheek humor. But because of the ruthless and down-on-their-luck characters that frequented them, there’s a sort of sinister undercurrent to the Gold Rush saloon that the typical pub lacks.

Over in the continental US, in Groveland, California, a small town in the Sierra Nevada foothills near Yosemite National Park, the memory of violence lingers at the Iron Door Saloon, with its granite walls, swinging cast-iron doors, walls adorned with taxidermy, and ceiling of hanging dollar bills.

Saloons were “rough and tumble”, says Iron Door owner Chris Loh. “Those people were built differently, the mentality was different.” Hollywood portrayals in TV shows and movies like Westworld, Tombstone and Deadwood aren’t that far off.

For example, when the Iron Door first opened as the Granite Store in the 1850s, there was a hanging tree across the street—that is, a tree on which to hang people—to mete out vigilante justice. “Even 18 years ago when I first got here,” recalls Loh, “this place was extremely rough. I only have one story of somebody pulling a gun in the bar but the ‘80s and the ‘70s were nuts.”

For all of the unsavoriness of the Gold Rush-era saloon, perhaps the most intriguing quality of those still around today is their resiliency. It’s not just that a handful of these drinking parlors survived after boomtowns went bust and deflated overnight, the same way they popped up; it’s that they made it through 13 tee-totaling years of Prohibition.

From 1920 to 1933, it was illegal to sell liquor in the United States, forcing most of the country’s bars to shut down. The relative lawlessness of mining towns helped some, like the Iron Door Saloon, to survive without much effort. “They would post a kid, typically a kid on horseback, at the top of Old Priest Grade [a high nearby hill] and when the constable was headed up, the kid would ride his horse through town and let everyone know they had to hide everything,” says Loh. A trap door in the stage led to a basement where the booze was kept.

Some saloons were forced to close for a period of time. Others were converted into pharmacies which could legally sell ‘medicinal’ alcohol, or house soda fountains that secretly mixed sweet syrups with homemade liquors like ‘Jake’, a toxic spirit made from fermented Jamaican ginger plants that permanently crippled or rendered impotent more than 15,000 people. Given the survival of the Gold Rush saloon into the 21st century, it was a risk people were apparently willing to take.

That the Silver Dollar, Red Onion, Iron Door and their ilk have survived is a lucky strike; it’s comparable to the handful of gold seekers who found fortune while thousands failed miserably and lost every penny they had in search of a shiny metal savior. Their scarcity makes the Gold Rush saloon all the more special on the American liquor landscape. And as I perch upon my bar stool at the Red Onion, I join the hordes who’ve come before me, finding salvation, however fleeting, at the bottom of a bottle.

Shoshi Parks is a San Francisco-based anthropologist and freelance writer sharing stories of travel, history and culture. Her work has appeared in publications including Smithsonian Magazine, Fodor's, and YES! Magazine. 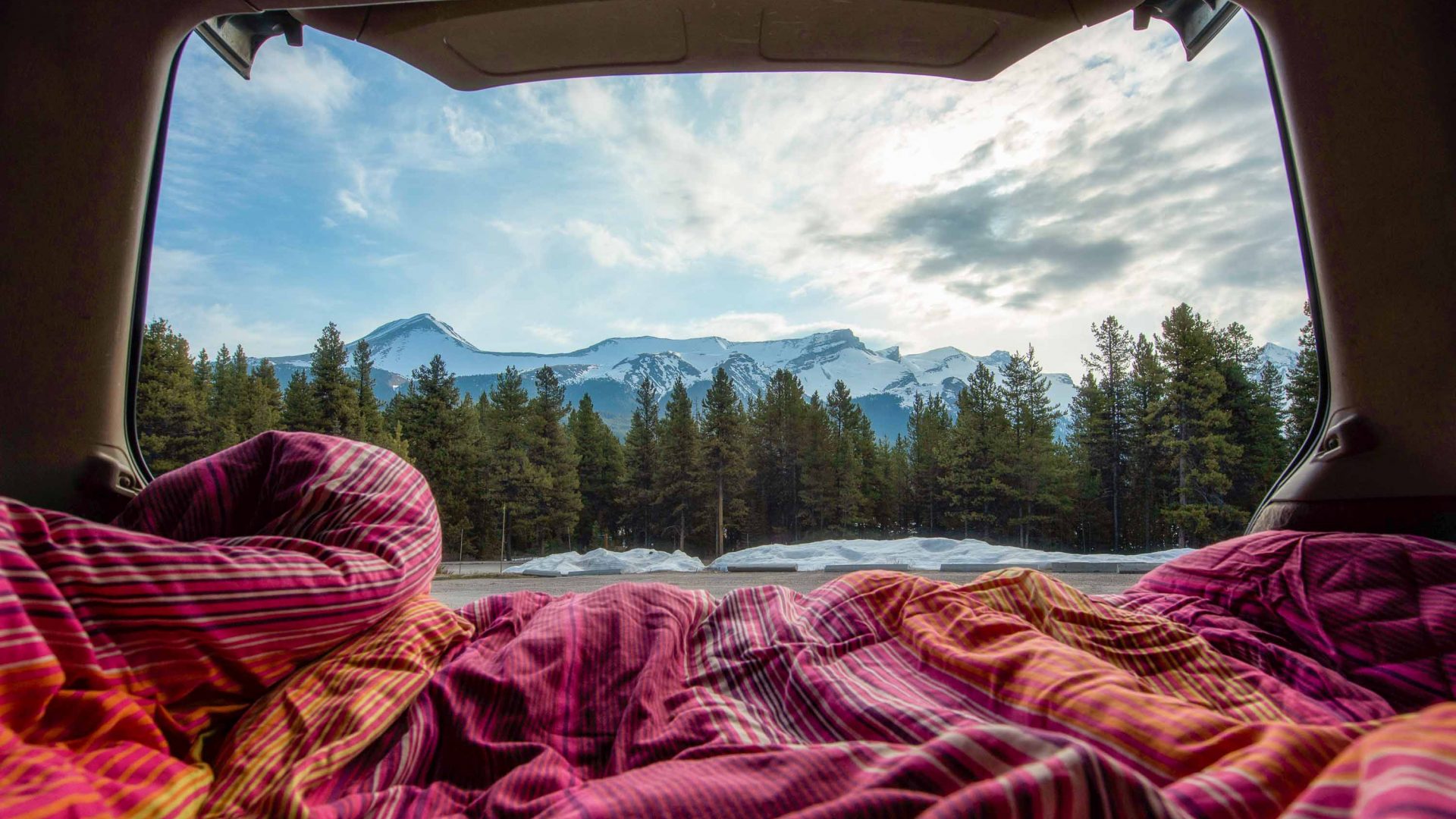 What can you learn from six gross, frustrating, spectacular months of #vanlife?