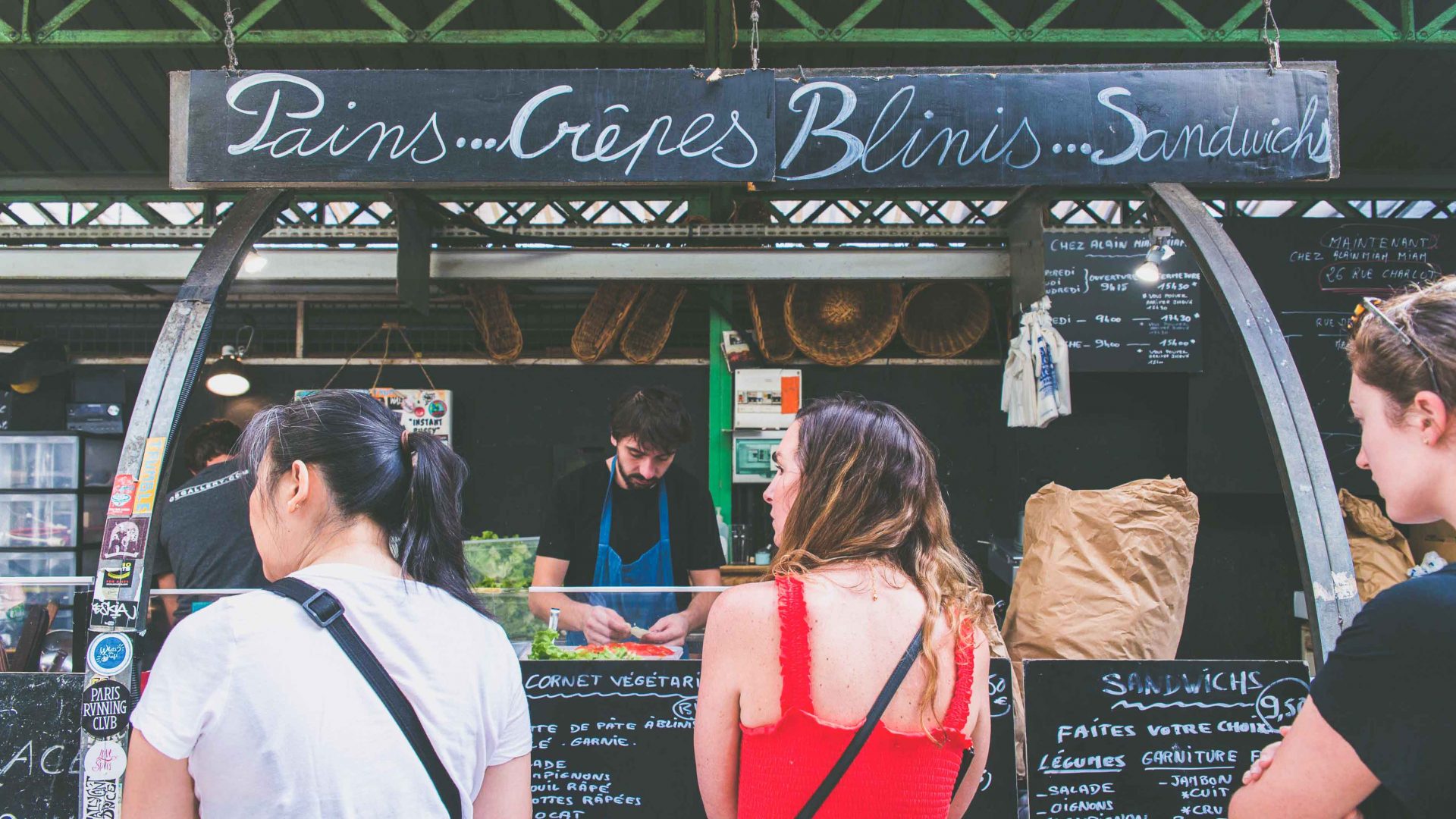 Alain Roussel, a nominee in Urban Adventures’ first ever global street food awards, hasn’t traveled much in his life but now, thanks to his literally world-famous sandwiches, galettes and crêpes, the world comes to him. Hannah Meltzer takes a bite.

It’s 9.30am on a Wednesday morning and Alain Roussel is holding court over his stand in the historic Marché des Enfants Rouges, the oldest covered market in Paris, in the heart of the now-hip Upper Marais.

As his son Jules sets out the ingredients for the day’s service—a gargantuan hunk of French ham, great wheels of Cantal cheese, baskets of fresh salads and avocados—Alain spreads a pleasingly gloopy batter across one of three cast-iron crêpe griddles. As the mixture starts to solidify, releasing a buttery aroma, the energetic 64-year-old looks up, smacks his lips, and says “miam maim!”

Right on brand. “Miam miam” translates quite simply as ‘yum yum’ and Roussel’s wildly popular stand is a place of simple pleasures. I am in the company of Arthur, a guide from day tour company Urban Adventures and all-round affable Frenchman, who introduces me to Alain’s simple but salivation-inducing menu.

First, his sandwiches: Imagine a sliced wedge of traditional pain pavé stuffed with generous slices of—depending on the customer’s whim—French cooked ham, Spanish cured ham, French pastrami, chicken or smoked trout, and toasted on both sides on the crêpe griddle. For non-carnivores, there is the cornet végétarian, a cone of traditional blini stuffed with salad, raw mushroom, avocado with goat cheese, and garnished with generous glugs of olive oil and honey. Filled galettes—savory buckwheat pancakes—are also on offer, as are sweet crêpes, for anyone who has room left.

Ingredients are all organic and come from small suppliers, and the recipes have changed very little since Alain started his stand 13 years ago in 2005. “They’re my recipes,” he tells me. “When my children were little, I often made them sandwiches—and that formed the basis of what I make at my stand. Later, when I was working out what to serve, I knew pretty quickly, in three minutes actually, what I was going to put inside.”

It was three minutes well-spent. Go at lunchtime and you could wait up to two hours to be handed one of his over-spilling grilled delights. The lines are due, in part, to Roussel’s international acclaim: He’s been featured on CNN, in the New York Times, and even internet sensation and rapper Action Bronson’s guide to Paris (scroll Alain’s Instagram and you’ll find a photo with Bronson, captioned with the cheeky tongue out and upside-down smiley emoji).

“I’m witnessing a change towards more diversity when it comes to street food in Paris,” says Arthur, who has been guiding with Paris Urban Adventures for six years. “It used to be only kebabs and now we have super-quality sandwiches at Le Marché des Enfants Rouges.”

But unlike many of the food hotspots vying for Insta-likes in an ever-expanding hipster scene, Alain would hardly describe himself as a foodie. “I’ve never been passionate about cooking; I am passionate about people,” he says. “I have no passion for cooking, but I like all the bon products,” he says, pointing at a huge half-wheel of eleven-month Comté cheese. “Everything that is bon comme ça.”

Alain trained as a baker in his younger years, but spent the two decades before he started the stand working as a psychotherapist, living in Normandy in northern France and then Nice in the south. But if his fascination with people was a constant throughout his career, his predilection for good ingredients and local production can be traced back to his childhood.

Alain spent his formative years in rural Touraine, a province in the Loire Valley that is, according to Arthur, often dubbed the ‘Garden of France’ for its excellent food. “I grew up in the middle of forests, woods and fields,” Alain tells me. “There was a large pond with fish, there were cows, chickens, ducks, pigs, cockerels, goats, everything. Horses too!”

As he talks about his early influences, he goes about the morning’s prep: Punching holes in the corners of neat rectangles of greaseproof paper before hanging them on dedicated hooks on the wall, putting away an immense half-wheel of Comté, and lining up containers of salad. His speaking style is uninhibited and playful, and his t-shirt covered in flour, but there’s plenty of precision in this well-practised morning routine.

“We live in a hyper-consumerist society, a society centered around the ‘click’. I had to invent a product people are prepared to wait for.”

Alain suggests that the hearty fare he serves, to be eaten with the hands, represents an alternative French tradition, one characterized by fine, rustic ingredients and the principle of coming together over food, a marked contrast to the airs and graces of traditional cuisine bourgeoisie. “This is French culture—fine products which are the result of work,” he says. “To make a cheese, it is slow; to make a ham, it is slow; growing vegetables takes time.”

And if his products are in the French tradition, so too is his philosophy on service. “I am here to serve no-one,” he says. “If you want to eat my stuff, come, but I am not at your service. If someone orders me ‘give me this, I don’t want that’ then they can go elsewhere.”

As a young adult, Alain was a conscientious objector to the French military draft, and an anti-war, ecological campaigner—he is still a radical at heart, seeing his family business as a riposte to consumerist capitalist culture.

Lowering his voice to a conspiratorial stage whisper, he tells me: “We live in a hyper-consumerist society, a society centered around the ‘click’. I had to invent a product people are prepared to wait for. It was my idea to teach people patience and generosity. I had to find something where people were confronted by a wait, and moreover, through that, they received a message of what generosity can be.”

It is perhaps this dedication to his principles that explains why Alain has not lost enthusiasm for what he does. As he goes through the morning routine, he tells me, “When I make a sandwich, every time is like I’m making my first sandwich. There is nothing repetitive in it for me, I don’t feel it.”

In spring 2018, Roussel opened his first bricks-and-mortar address on the adjacent Rue Charlot, a 30-second dash from his stand in the market, and neighbored by trendy juice bars, chic independent designers and pop-up art galleries.

His internet fame and cult status precede him. I mention the stall to a friend who’s in town from Manhattan that same week and she says: “Oh, the Miam Miam guy? It’s super well-known in New York”. Alain even has custom graphic-designed t-shirts reading ‘Paris Miam Miam Club’, which he is wearing when we meet.

So what does this 1970s radical make of being an internet sensation? “That is very pleasant,” he says. “I like it because of what it means about having good relationships with people. At the same time, I always say it’s not me that’s famous, it’s my sandwiches.”

“When I go into my apartment, there is no crowd of women there, screaming ‘Alain, Alain!’. There’s nobody,” he says with a playful smile. “I am very happy that it has an impact, but my sandwiches are the celebrities—not me.”

Back at Alain’s, Arthur and I speak to a group of twenty-somethings from Los Angeles who have read about the stand online; they film each other for Instagram as they take their first delighted bites. Meanwhile, Michelle from Austin, Texas, has read about Alain in an alternative guidebook to Paris and decides to brave the line to try his treats first-hand.

As we come to the end of conversation, he’s being called from the kitchen of his new address on Rue Charlot. “Alain, viens là!”. He raises his eyebrows, rolls his eyes. “Oo la la!”, he exclaims jovially, before adding one final comment.

“I haven’t traveled a lot in my life. I don’t have the time to travel. I’ve worked a lot, I’ve had a fair few children, I have retrained a lot; I’ve had very little time for travel. You have two options: either you go everywhere, or everywhere comes to you. I’m the second—the whole world comes to me. C’est merveilleux.”

Originally from London, Hannah is based in Paris where she covers French culture and society, current affairs and travel. The Paris destination expert for Telegraph Travel, she's also written for Vanity Fair, openDemocracy and New Statesman.