The complex ceremony of Canadian fish-kissing 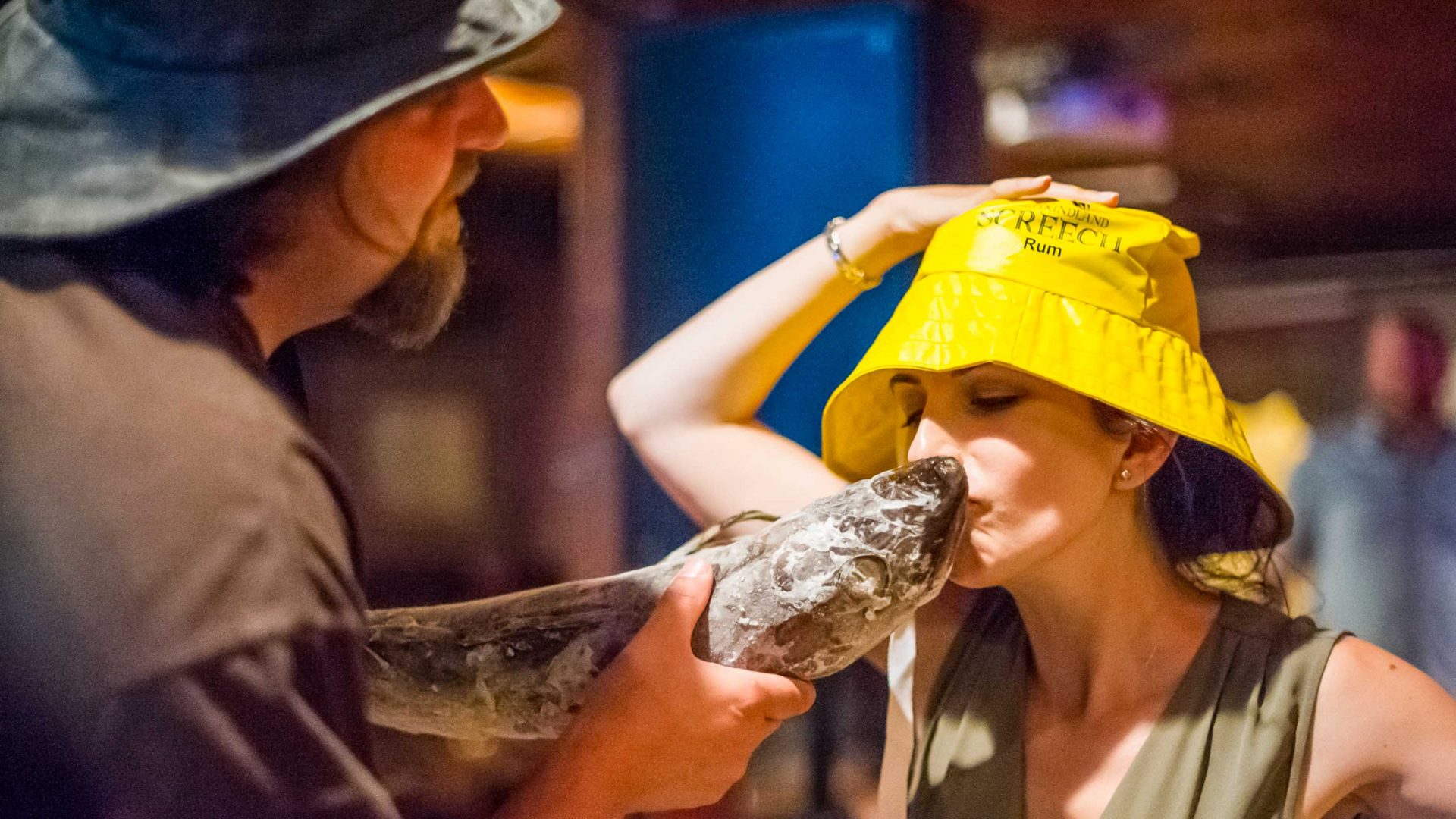 On a trip to Newfoundland, travel writer Mike MacEacheran was expecting glacial fjords and friendly locals—but he wasn’t prepared for the province’s baffling fish-kissing tradition.

In a boat at the edge of one of Canada’s most spectacular fjords, near where the Gulf of St. Lawrence meets the Atlantic, a group of newcomers are experiencing a deeply-rooted Newfoundland tradition in all its absurdity.

At the starboard bow, dressed in bright yellow oilskins and ill-fitting sou’wester, is Captain Reg Williams and he’s holding a frozen cod, as well as a bottle of 40 per cent rum, known as Screech.

“I’ll fair warn you,” he says, his lilting, Irish-influenced accent lingering above the calm of Bonne Bay, “but there’s a certain procedure to go through to become one of us.” Reg interrupts what he’s doing—namely, lining up a series of boozy shots—to break down the head-scratching ‘Screech-In’ ceremony that’s about to begin.

The first part of our initiation, Reg says, involves repeating certain words: “Just a little verse showing your dedication to the Newfoundland cause.”

Next, we have to dance a two-step jig to the beat of an ‘ugly stick’, a mop handle covered in beer bottle caps, then drink a punchy shot of rum. “Not enough to hurt you,” he adds, “but enough for a burning sensation in your inner organs.”

The last part? Kissing a cod. “When you fellas leave, you gotta leave with the right smell,” Reg tells me.

This, to be clear, is no gimmick for a coachload of camera-toting tourists. I’m taking part in the ceremony—waiting to be granted entrance to the Royal Order of Newfoundland Screechers—and as much as it’s a rite-of-passage, there’s nothing overly-enjoyable about it.

Of more concern is that Reg has been doing this since 1973, long before Newfoundland was on the traveler’s map, and there’s an over-riding sense of mischief in his eyes. Five minutes later, with throat burning and a whiff of fish on my lips, I’m deposited back on the quayside next to the lobster traps to ponder just what on earth just happened.

“Cod was everything here, and while they eat the prairie oyster (or bull’s testicle) in Alberta, and they drink a sourtoe cocktail in the Yukon, we have our cod and Screech-In. It’s our way of showing outsiders how much we love our local ways. It can be a little uncouth, but it’s embedded in every community.”

Ugly stick dancing. Moonshine drinking. Fish kissing. No wonder Newfoundland has a reputation for being a little bit ‘different’ to the rest of Canada. This is a far-flung province with a vast, vacant feel, more than 1,500 kilometers from the country’s capital Ottawa, and with a muddled heritage of Irish, English, Scottish, French and Norse.

It’s only inhabited around the coast and even then scarcely: 10,000-year-old icebergs, drifting south from the Arctic Circle, pull up in harbors every spring and 100km/h gales aren’t uncommon. With good reason, the southern shoreline of the Long Range Mountains is known as Wreckhouse—because when the wind picks up it does exactly that.

Most visitors arrive in provincial capital St. John’s, but my route first takes me west, from the second largest city Corner Brook to Rocky Harbor, the entrance to the Shangri-La attractions of Gros Morne National Park. A big part of the Screech-In’s appeal is its origin story and it’s here where I meet initiation veteran and local musician Wayne Parsons to learn more about the province’s odd cultural totem.

As Wayne tells it, the love for Screech dates back some 250 years to when Newfoundlanders first traded cod stocks for sugar, spices and Demerara rum from the West Indies. Illicit boats, their gunwales full of liquor, shuttled back and forth from Newfoundland and as Jamaica increasingly looked north for supplies of salted cod, so traditional fishing communities on Canada’s Atlantic coast turned to Jamaica for rum.

Soon after, at the turn of the 20th century, the Newfoundland and Labrador Liquor Corporation took ownership of bottling and ageing the alcohol and the rum became ingrained in many aspects of life.

“It could strip the varnish off a boat, it was so harsh,” Wayne tells me, dragging each word out as if pulling them up from the depths of the ocean. “It made people screech—and that’s how the name stuck.”

Another story from Rocky Harbor traces the Screech-In to when traditional seal hunters played tricks on newcomers before they went onto the ice to hunt. At first, they’d drink a rum shot to warm them from the grating cold, then kiss a fish to help them get used to the smell of their prey. Skeptics say this is little more than a fishwife’s tale, but whether true or not, poking fun remains pivotal to the ritual, as is lampooning provincial stereotypes.

Maybe part of the ongoing appeal of the Screech-In is the welcome idea of making friends with outsiders and breaking down boundaries and borders together. Which in today’s world seems more relevant and pressing than ever.

Far more probable is the Screen-In gaining a toehold through the dyed-in-the-wool drinking culture of St. John’s. Since the mid-1970s, Wayne tells me, drunk patrons have been encouraged to do all manner of humiliating acts before last orders on George Street, particularly at legendary saloons Christian’s Pub or Trapper John’s (today, the latter’s Screech-In involves kissing the backside of a taxidermy puffin named ‘Stubby’).

Despite the Screech-In’s origins remaining dubiously hazy, no one can deny its ongoing cultural influence, or the relevance the part the cod plays. It alone helped Newfoundland become one of the biggest fisheries in the world until its industry-ending slump and moratorium at the beginning of the 1990s.

“Cod was everything here,” says Wayne, “and while they eat the prairie oyster (or bull’s testicle) in Alberta, and they drink a sourtoe cocktail in the Yukon, we have our cod and Screech-In. It’s our way of showing outsiders how much we love our local ways. It can be a little uncouth, but it’s embedded in every community.”

Similar yarns aren’t in short supply in St. Anthony, a town four hours away on the island’s northernmost tip. At the Royal Canadian Legion, occupying a modest building overlooking the harbor, I meet friendly bar manager Maxine Patey, who is clearing up after the weekly bingo night. In keeping with the oddity of the whole setup, there is an two-and-a-half-meter, air-to-air Falcon Missile kept on display in the bar’s corner.

“We’ve always got a frozen cod in our freezer,” she says, before pointing to four dictionary-thick volumes stacked behind the bar. Taking one down, she leafs through it to show a list of the most recent members welcomed into the legion’s Royal Order of Newfoundlanders. Ledger lines are filled with names from England, Norway, Iceland and Chile, while addresses from Russia to Germany to Australia spill over the pages. Between are lines of kanji script from China and Japan.

“We completed 200 ceremonies last year, and one day we initiated 32 people,” says Maxine, pouring me a criminally large glass of Screech. “Most towns have a different version and ours involves eating a slice of Newfie steak (baloney), capelin in season, or a ‘jiggs dinner’ of boiled salt beef—it helps line the stomach.”

Before I leave, Maxine tells another anecdote involving the theft of nine of the bar’s oilskin sou’westers, an incident which has left the bar with just the one ceremonial hat. At this stage of my journey, I think, I really could believe anything.

Who knows. Maybe part of the ongoing appeal of the Screech-In is the welcome idea of making friends with outsiders and breaking down boundaries and borders together. Which in today’s world seems more relevant and pressing than ever. As Maxine says before I leave, “It’s part of the Newfoundland experience. We send you away as a friend, hoping you’ll one day come back.” 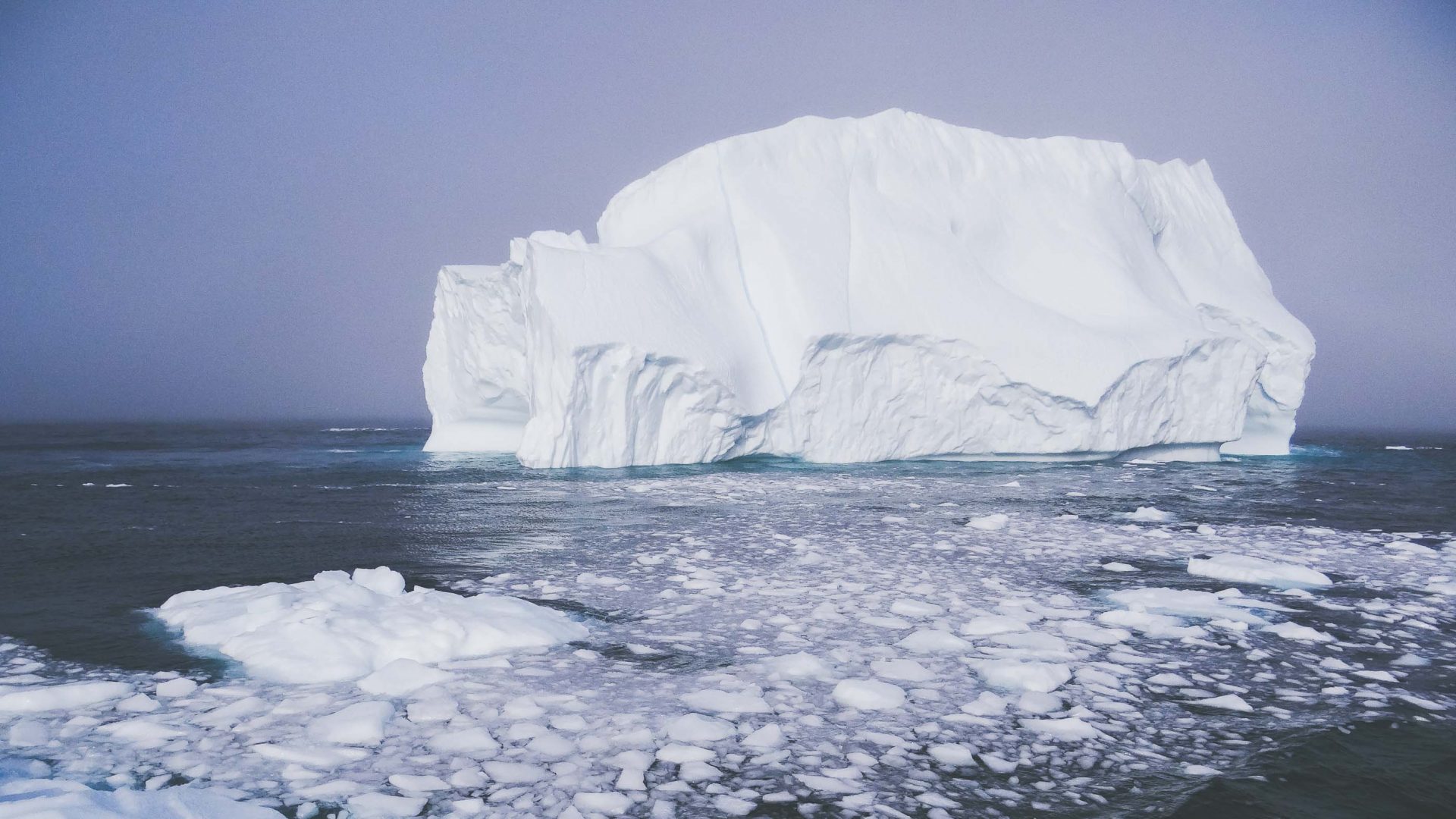