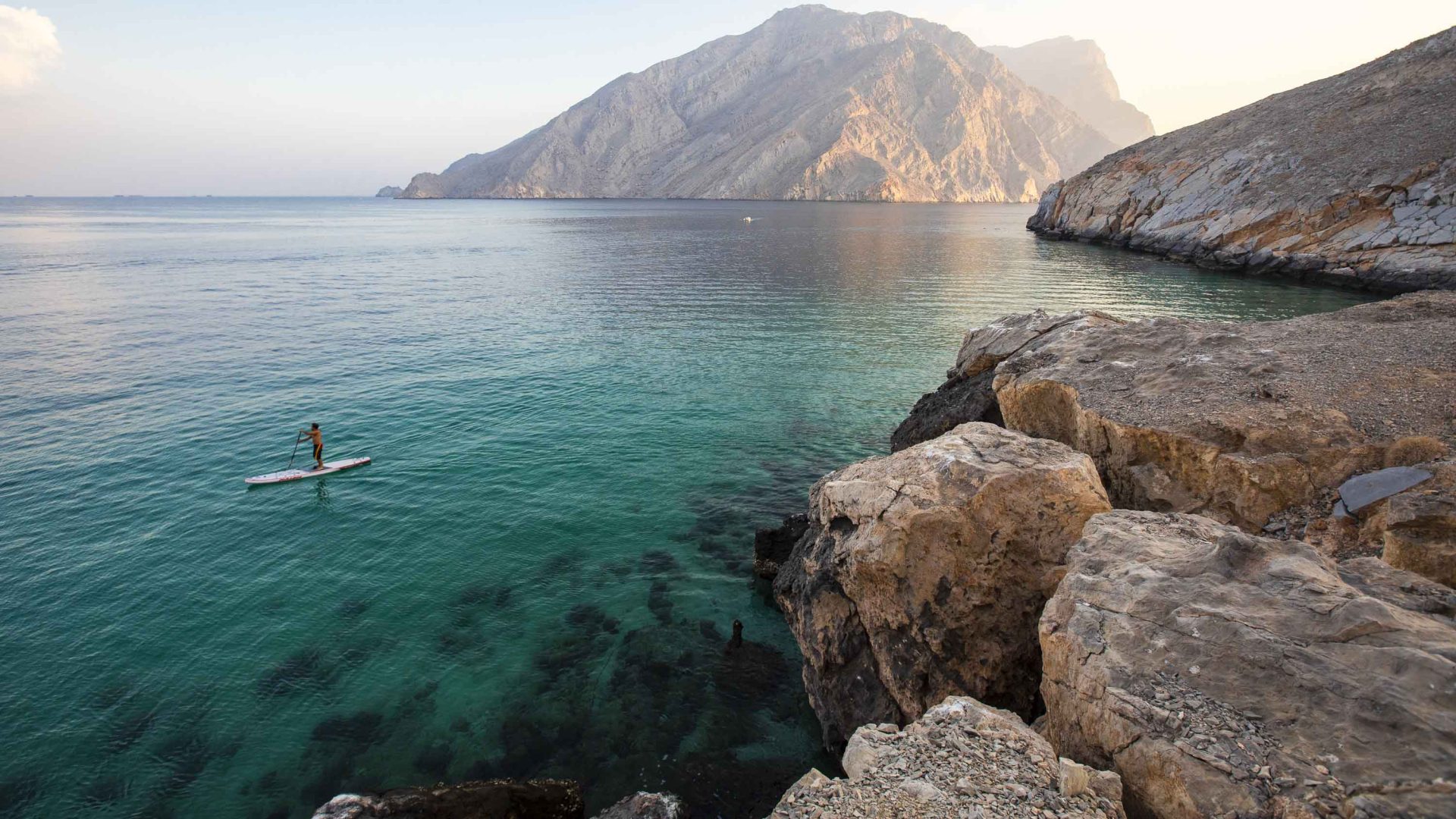 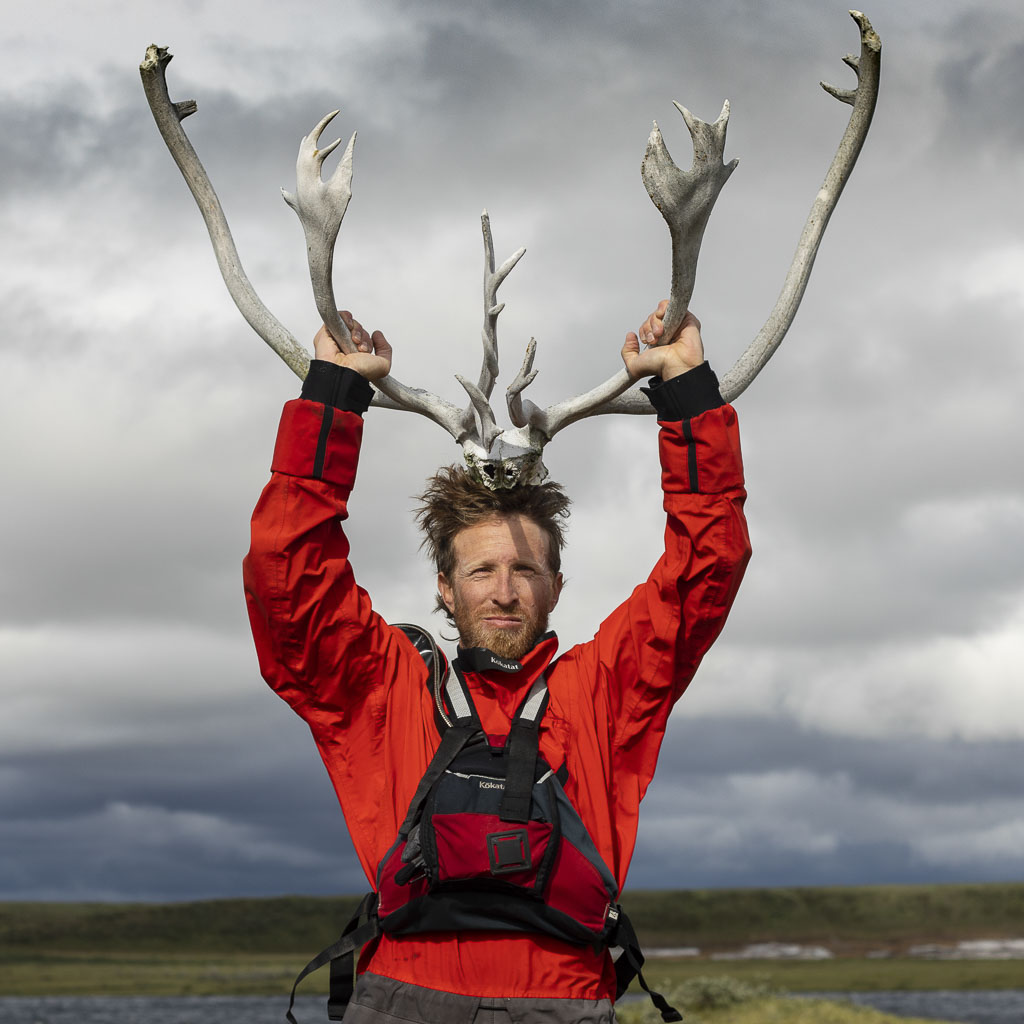 On a bucket list trip to paddle from the Persian Gulf to the Gulf of Oman, photographer Ryan Salm reflects on how we can find beauty in places we never expect to find ourselves.

The fjord walls reached up toward the heavens, ending in a jet-black, star-studded sky. All I could see were varying shades of black, the contours of the cliffs, and a dark sheen on the water until something caught my eye. Iridescent neon blue bioluminescence began to glow off the bow of my board. Mesmerized, I stared downward. The further I went, the more entrenched in color the water became. The blade of my paddle was completely illuminated and surrounded by each stroke. It was one of the most beautiful moments I can recall.

In 2014, I first found information about the Musandam Peninsula—a beautiful, mountainous peninsula in the Strait of Hormuz, known locally as Ruus Al Jibal. Located between Oman and the United Arab Emirates, the region is home to the Shihuh tribe and holds rich cultural roots and history.

Since then, I’ve been determined to make it to the Musandam Peninsula myself. In December 2022, I and a trusty group of ragtag friends arrived with stand-up paddleboards and a plan to see as much as we could by water. We paddled out of the town of Khasab, Oman, stocked with five days’ worth of food, plenty of drinking water and our tents into the Gulf of Oman.

If you don’t look closely, the map of this region looks like abstract art. A scrabbly enclave in the strait of Hormuz is bisected by waterways, bays, mountains and tiny seaside villages. It has been dubbed the “Norway of Arabia” for its breathtaking desert fjords.

We hoped to paddle to the two major khors (inlets) of the Strait of Hormuz—Khor Sham and Khor Najd, both of which form the most dramatic parts of this horn of Arabia. The crux is a skinny, steep isthmus separating the two.

Dripping with sweat and close to heat stroke, we trudged in shifts carrying boards and gear up the rugged landscape. From the top, the view was staggering in both directions. Behind us, the Arabian Sea and, in front, the Gulf of Oman.

The temperatures this time of year are at least bearable, though we still found ourselves feeling like cookies in the oven without shelter from the Arabian sun. Here, the wind serves as a respite.

Paddling into the midday sun, we stuck to the open coastline for a mile before bearing southeast into a secluded fjord. Military warships, fishing boats and the occasional Iranian smuggler boat carrying an assortment of goods drifted by, making us feel as small as we are on our paddleboards.

Most nights we fell asleep to dark, dusty, star-filled skies. Every morning, we woke to the sun softening the towering walls of cliffs above us with rose-colored light, and we went back to the sheltered waters. The Arabian Sea has carved out a quiet ecosystem protected from the greater ocean within the Persian Gulf.

Schools of fish jumped in unison. Tiny blue minnows flickered along with an occasional ray flapping by, looking like it could fly in the water. Cormorants and terns hunted. A few fortunate moments featured dolphins poking their fins from the surface.

Nadayfi and Qanah were two unexpected waterside villages we paddled to. Homes made from local stones appeared like a mirage. During the midday sizzle, we sidled up to the lee side of a house or beside a wall for a break from the sun. We all shared the shade with a group of fishermen until one invited us onto their porch for freshly caught blackened fish over broken conversation.

Our mellowest days were behind us as we approached the isthmus known as the “view of two seas.” The fjord’s vertical walls rose dramatically from windless, glassy waters. The path I had seen on Google Maps was actually a steep stack of 440 steps rising from the water’s edge. It was time to take our paddleboards from the water and portage.

Dripping with sweat and close to heat stroke, we trudged in shifts carrying boards and gear up the rugged landscape. From the top, the view was staggering in both directions. Behind us, the Arabian Sea and, in front, the Gulf of Oman.

Greeted by a strong headwind we each paddled at our own pace. Any attempt to take a break would result in a loss of ground.

Searching for a campsite, we were taken aback by the collection of trash and filth on the beaches. I slept under a tree to avoid stepping on a nail or sleeping on garbage. With a clearer course to the open sea, it must have piled in with the tides. The harsh realities of human impact began to resurface for our group.

I rose the following morning, sweat-crusted and damp under a lone acacia tree. Cicadas and other insects created a symphony of sound echoing off the towering walls to the north, accompanied by a far-off swish of the surf. The droning, harmonic sound of the morning call to prayer from the nearby town of Habalain quickly lifted my spirits and set the tone for the day.

Greeted by a strong headwind, we each paddled at our own pace. Any attempt to take a break would result in a loss of ground. Entering Khor Najd, we were once again greeted by schools of fish and the occasional turtle popping its head above the surface. The day drifted by to the sound of our paddles dipping in and out of the water.

That evening, the last rays of the setting sun poked through a saddle in the mountains. Light flared, illuminating the walls above us. It was one of those moments. There was no question that this was the perfect spot to spend our last night before paddling out the next morning.

Then, my GPS messaging device beeped. An endless stream of messages filed in. I only needed to read a few words to realize that our trip was over and our lives would be changed forever. There had been an unexpected family tragedy back home. I sat in silence with tears brewing and my mind racing. The roll of a banjo, played by one of our comrades, echoed off the walls. I tried to gather my thoughts.

Over the next hour, I was able to contact Musandam Discovery Diving, a local diving company we had dived with before our paddling began, via satellite. Every message took what seemed like an eternity to send and receive. Somehow, eventually, our extraction was planned and I broke the news to our team.

There was a new stillness in the air as we packed up camp and paddled toward our takeout. It’s a calmness that I will never forget as long as I live. The stars reflecting on the still water of the fjord, the bioluminescence, and the monstrous walls silhouetted by the black night sky took over me. It’s terrifying how beautiful something can be even in the worst of times. Besides the choices we make, we have so little control in this life.

And just like that, we left the Musandam Peninsula behind. I’m not sure that I’ll ever really know what to make of it, but I know that I’ll always remember it.

An education in geography, communications and photography along with an adventurous desire to understand far-away cultures and lands has led Ryan Salm to work as a documentary photographer. Calling the mountain community of Lake Tahoe his home has allowed him to combine his love of skiing, paddling, hiking, and climbing with his work, which has been featured in Patagonia, Vogue, Outside, ESPN, and others. 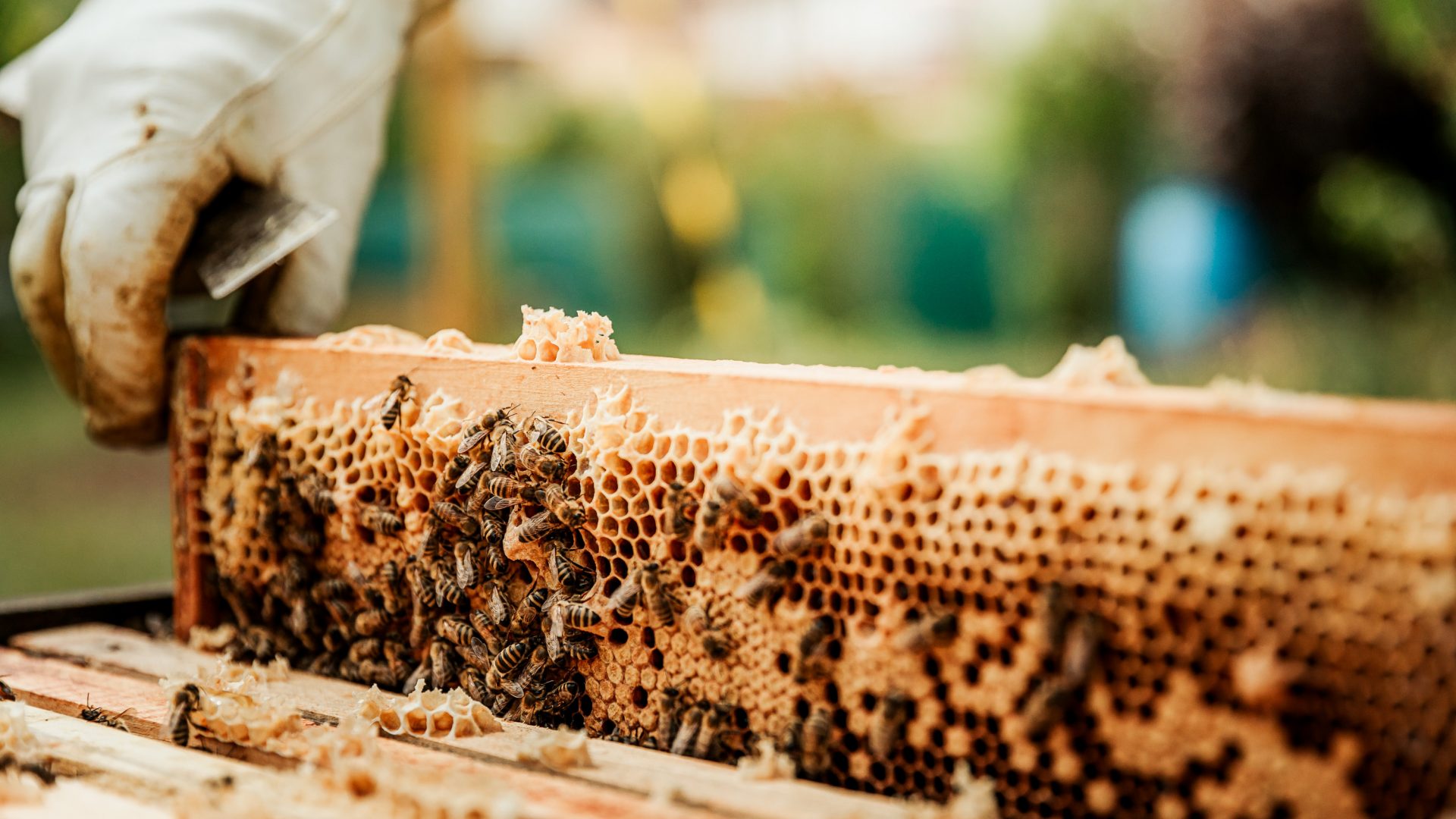 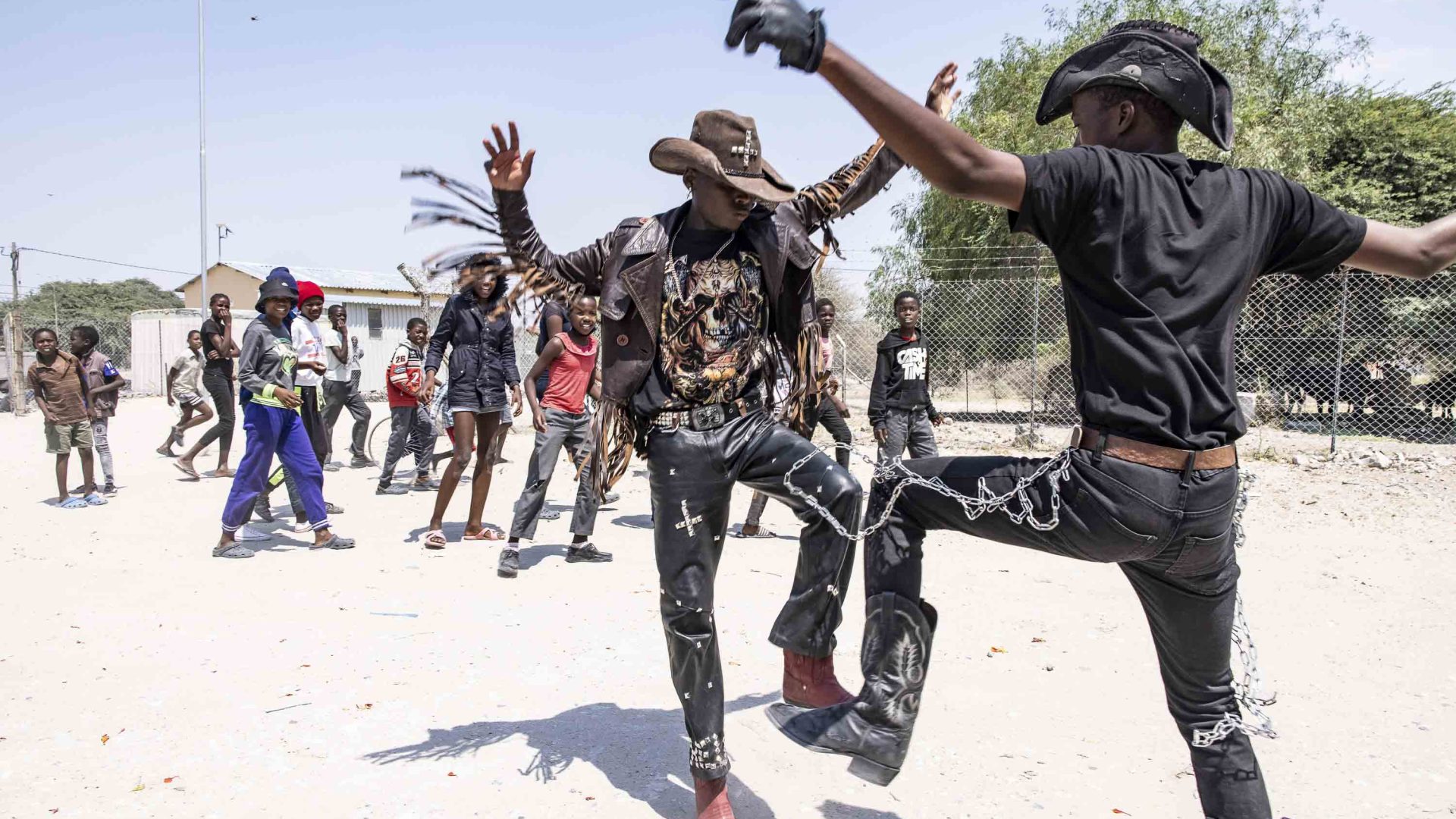 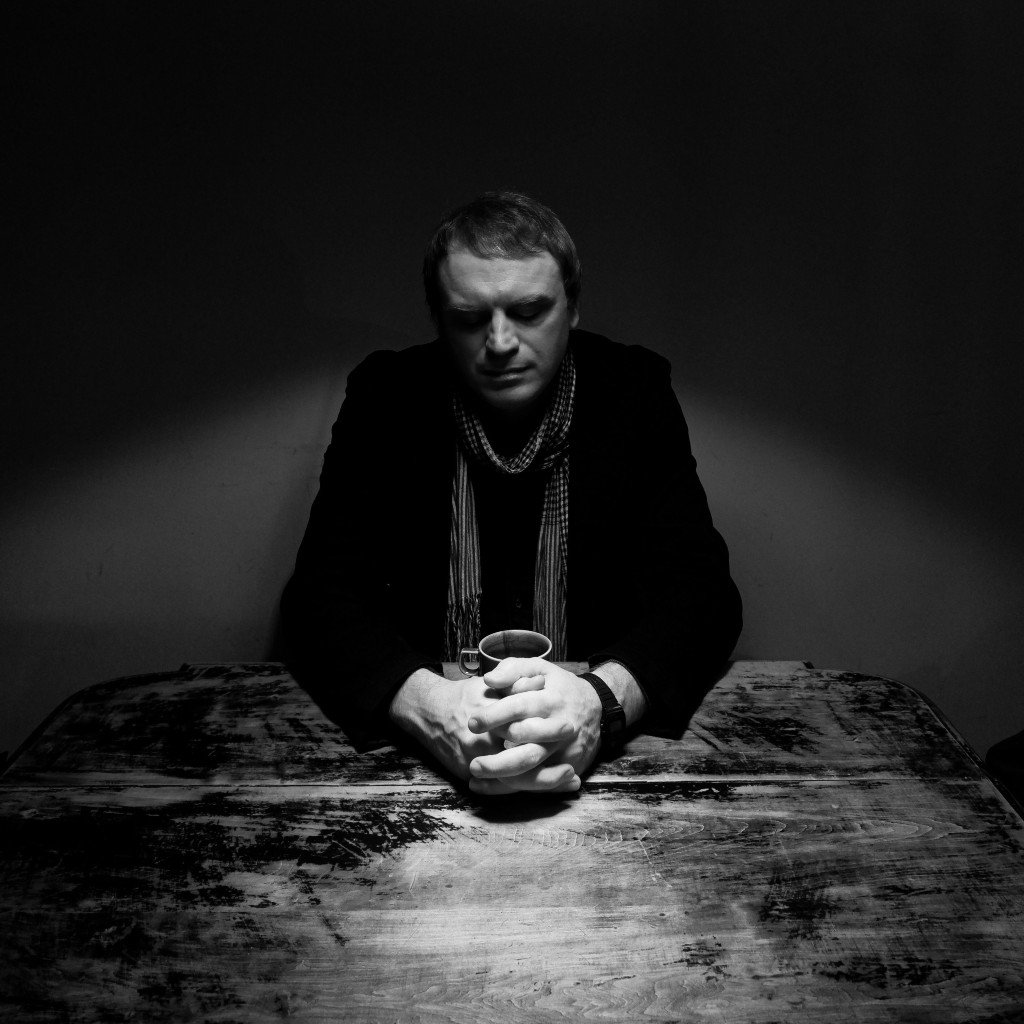 Cowboys of the Kalahari: Inside the death metal subculture of the Botswana desert 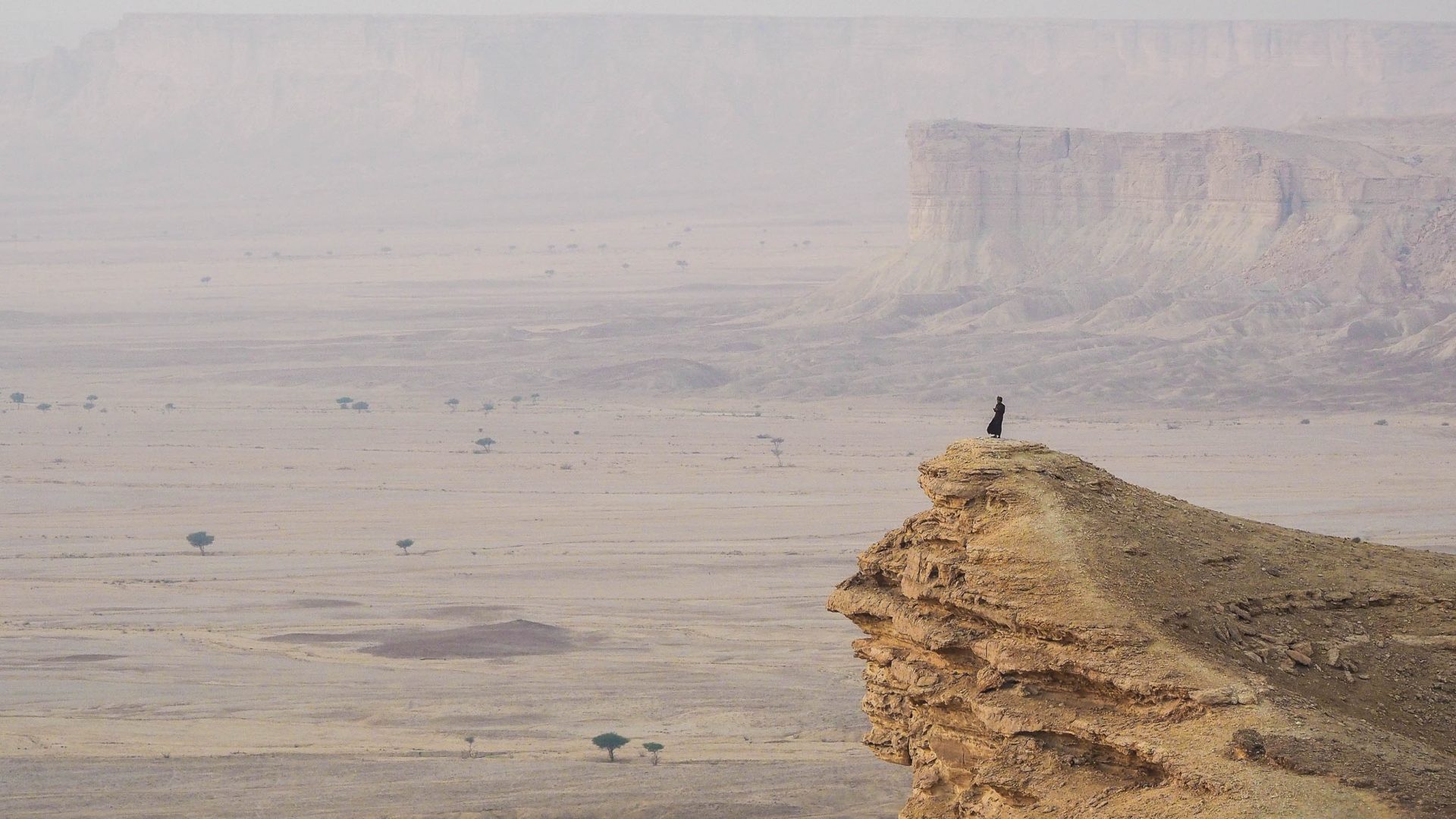