In a land of extraordinary food, why are women and girls in Southeast Asia going hungry? 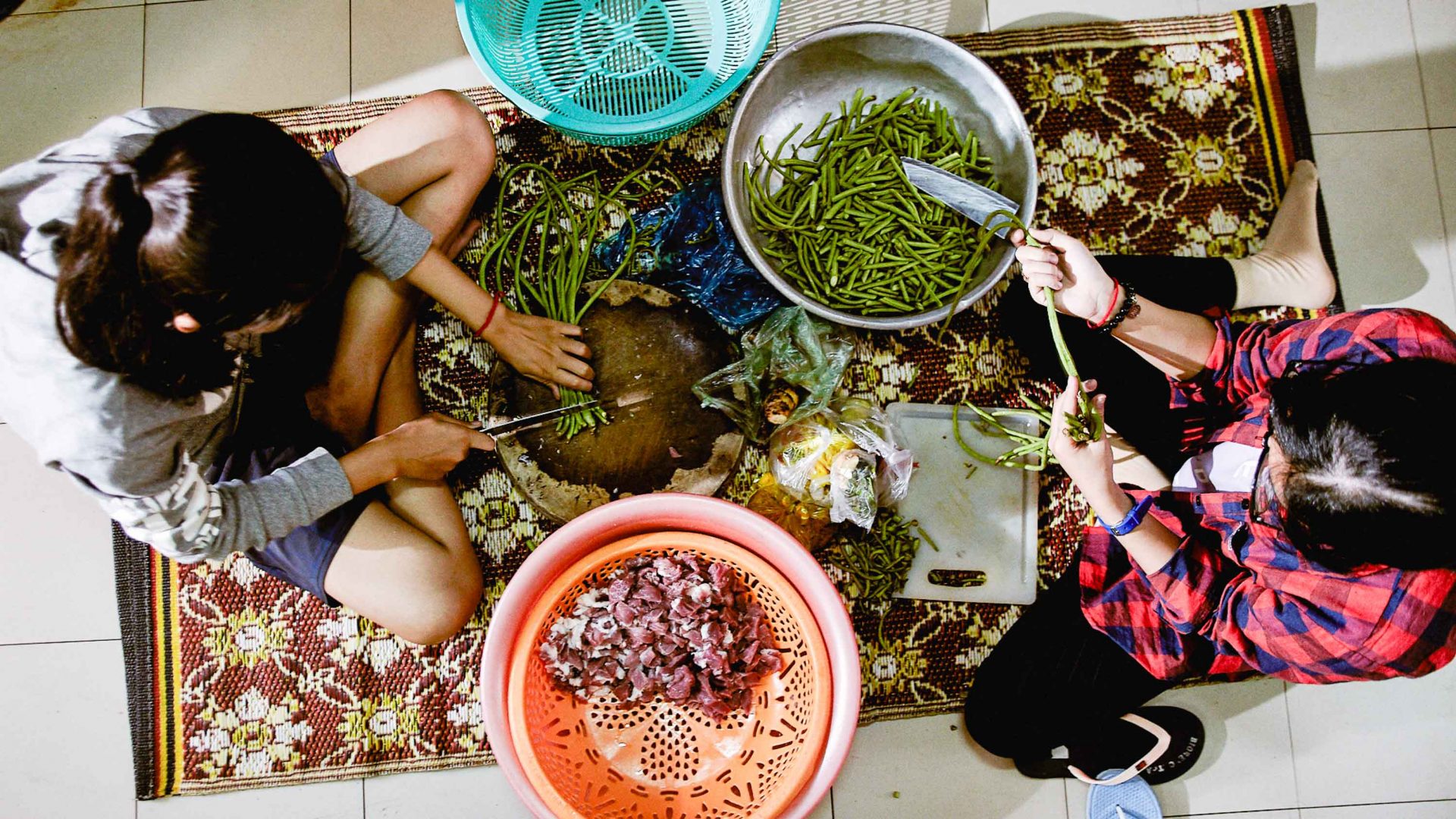 While investigating the rise in malnutrition among young women in Southeast Asia, journalist Corinne Redfern has been fed some of the best food of her life. So what’s going on?

The rough, steep track is scarred with cracks and crannies from the season’s heavy rain, and our small scooter’s tires are sliding wildly over the stones as we attempt our mountain descent. As passenger, my responsibilities are supposedly straightforward: Stay still; take photos of the Laotian landscape; don’t scream at the scary bits.

Mostly, I’m just trying to work out whether to hold on tightly to the back of the bike, or raise my hands to my face—ready to break a sudden slip and fall. There’s no mobile phone reception, the sun is setting, and it’s been over two hours since we left the last village. I look back over my shoulder for our translator and guide Mina. My stomach twists. The 23-year-old has disappeared from view.

We stop the bike, and debate driving back versus climbing on foot. Francesco, an almost annoyingly intrepid Italian photojournalist-suddenly-turned-off-road-moped-machine, is all for the former. Legs shaking and bum cheeks numb, I’m somewhat less inclined. Honestly, I’d rather brave the rocks barefoot than ride anywhere near them ever again. Then a drop of rain lands on my helmet, and we’re instantly agreed. The fastest option wins: We have to check she’s OK.

Mina’s bike materializes at the crest of the hill just as we’re turning ours around. On both of her arms, she’s swinging blue plastic bin liners, each one apparently containing a large green bush. “Look what I found,” she yells, as she launches her way down towards us, clouds of scree spraying up in her wake. “Food!”

It’s been over nine months since Francesco Brembati and I launched ‘Crying Hunger’, an international investigation into malnutrition and motherhood in Southeast Asia funded by the European Journalism Center.

Spanning Laos, Cambodia and the Philippines, we wanted to uncover the underlying gender issues that both cause and perpetuate hunger within the region, and vice versa. UNICEF figures showed that rates of both teenage pregnancy and child malnutrition had increased by over 50 per cent in all three countries since 2000—which gave me the idea of the project in the first place.

While solid Southeast Asia-specific data to back up our theory was initially hard to come by, previous research trips had led me to understand that a lack of food was leaving girls as young as 10 and 11 vulnerable to abusive relationships, teenage pregnancy and arranged marriage.

Groups of long-limbed teenage girls in the northern Philippines tell me of two-bowls-of-garlic-fried-rice-a-day and the occasional canned sardine “on a good week”, while official UN figures mark chronic malnutrition as the worst it’s been in over 10 years.

This was either because their families either sold them off in exchange for sacks of rice in the shape of a wedding dowry, or their lack of socio-economic power left them unable to feed themselves without the financial support of a (often much older) man. We planned to explore this connection, and show how the promotion of gender equality could help reduce rates of malnutrition, as told through the stories of teenage girls.

Because for all the region’s magical culinary powers and inherent generosity, malnutrition is increasing, and at an alarming rate. In Cambodia, tourists may tuck into coconut-y chicken amok, but according to the region’s official medical representatives, up to 50 per cent of children and young mothers in the western district of Mondulkiri are thought to show symptoms of under-nourishment.

Meanwhile, these doctors insist that more often than not, the girls’ older husbands are well-fed—a fact that’s less surprising when you consider hard-to-shake Cambodian cultural norms which dictate “men eat first”, even when there’s only food for one.

Groups of long-limbed teenage girls in the northern Philippines tell me of two-bowls-of-garlic-fried-rice-a-day and the occasional canned sardine “on a good week”, while official UN figures mark chronic malnutrition as the worst it’s been in over 10 years. And as we were slipping and sliding our way through the Laotian jungle, almost half of the country’s under-fives are believed to be “stunted” and underweight.

When one Khamu village invites us to join their elders for lunch, we ask to join them in sourcing it too—only to find ourselves scaling a small mountain with a group of teenage girls and digging for bamboo roots in the raw, blistering heat of the mid-morning sun.

“Sometimes it’s easier just to eat nothing at all, but then I’m so hungry I think I’ll pass out.”

Taking a moment’s rest to survey our surroundings, I see the ground is black and charred: Hundreds of hectares “slashed and burnt” to prepare the land for the next season’s rice harvest in a dangerously outdated agricultural practice that’s proven hard to prevent. The exhaustive resources used to procure and prepare all this food in the first place dries out my mouth and leaves a bad taste on my tongue.

“If you’re young, it’s not too hard,” says 19-year-old Thong, whose sweat seeps through her long-sleeved t-shirt as she rests the heavy blade of her knife on her lap. “You can go into the forest and fill sacks with plants and cook everything that you find. But when you’re too old or injured, or your husband is at work and you have babies who need you to stay at home, then it feels impossible.

“Sometimes it’s easier just to eat nothing at all, but then I’m so hungry I think I’ll pass out.” Thai food is her favorite, she adds, but she can’t remember the last time she was able to eat it. Most days, it’s chili with stir-fried vegetables and lots of steamed rice.

If there’s any food left over from the day’s harvest, she’ll sell it on the side of the road from behind a wooden stall—the profits from which become the only money she ever gets to keep for herself. “But not many tourists want to buy food from me,” she says. “They’d rather go to restaurants or the night food markets in town.” I make a mental note to be more aware of who I’m purchasing my meals from in the future, and to prioritize stalls run by girls.

With the mopeds parked up and bin bags of bushes stored back in her bedroom, Mina puts it simply: When food is scarce, culinary skills are often derived from necessity.

“I think Southeast Asian food must be the best in the world, because my mother can cook anything and make it taste very good,” she says. “She taught me to be creative. Growing up, we had very little to eat, so I had to learn what grass we could pick to eat and which mushrooms would make us feel full, not sick. She showed me how to hide bad flavors with ginger or tamarind, and said I needed to be willing to try new things because maybe we couldn’t afford the old ones anymore.”

‘New things’ might describe snake meat, ants and bumblebee larvae—all sold at Luang Prabang’s local market and bought by families without the financial resources for chicken, buffalo or pork. But on this occasion, Mina mostly means greenery caught growing wild by the side of the road. “I keep thinking how happy my family will be when they see what I’ve brought them,” she says. “Tomorrow, you must drive on without me—I want to go into the forest and find a whole feast.”

Corinne Redfern is an award-winning roving journalist with a focus on women's rights and human interest stories. Ex-features director for Marie Claire, bylines include The Guardian, Telegraph, Sunday Times, Stylist, and ELLE.