Papua New Guinea expert, Ian Lloyd Neubauer, visits a remote lodge on Lake Murray, accessible only via light aircraft. The lake is home to the enormous black bass and, as the local hunter-gatherer tribes believe, a gigantic Loch Ness-type monster. A good destination for a spot of fishing, then.

The nimble PAC 750XL nine-seater swoops above dense pillows of clouds after taking off from Mount Hagen, PNG’s third largest city. Accompanying me in the cabin is a pilot from New Zealand, five fanatical fishermen from Australia, and their eccentric guide Pip Clement. “We are going to go places where no sport fishermen have ever been,” Pip announces as our aircraft pops through the clouds to reveal the untouched jungles of Western Province. There’s nothing but treetops as far as the eye can see.

An hour after take-off, we reach the eastern edge of Lake Murray. The body of water is not round, as I’d expected, but octopus-shaped with tentacles that morph into serpentine rivers. The largest of these is the Strickland, which merges into the Fly, which empties into the Coral Sea, the body of water dividing Australia and PNG.

When we alight from our aircraft, scores of locals have congregated around the end of the grassy airstrip: some smiling, some frowning, others sporting facial expressions that should be reserved for the landing of extra-terrestrials. We are only the fourth group of tourists to visit Lake Murray Lodge since it opened in 2016. With the exception of a Swiss couple—missionaries who are busying themselves translating the Bible into kuni, the lingua franca—have rarely been seen around these parts since PNG won its independence from Australia in 1975.

A short stroll from the airstrip leads to a creek where two large aluminium dinghies with 60 horsepower outboard engines and uniformed drivers await. They whisk us into the lake, a shimmering silvery expanse edged by impenetrable jungle and the faint outline of palm-thatch villages. The only other signs of human activity are the dugout canoes,  where fishermen cast nets into water that’s pockmarked with emerald-green lily pads.

RELATED: This photographer hopped freight trains through the Sahara

The lodge is set on the headland of a large island and barely visible under a canopy of trees. Centred around a plantation-style clubhouse with unobstructed views of the lake from its wrap-around deck,the bar does a roaring trade—despite charging Sydney nightclub prices for local beer. “Fisherman are very thirsty people,” says Andrew Narie, the New Guinean manager. “They fish, fish, fish all day and drink, drink, drink all night.”

The fishermen set off in pursuit of black bass after lunch. I am ferried to Boboa Station, the largest settlement of Lake Murray, where Andrew introduces me to the locals as his “friend”. Every person we meet shakes my hand and wishes me “Good afternoon, sir”, while packs of giggling children tail us wherever we go.

When we pass a local school–no more than a corrugated shed minus any ventilation–the teacher invites us in to hear her pupils recite a nursery rhyme. They chant the verses with the fervor of warriors from the highland, and turn apoplectic with laughter when I add my voice to the melee.

Most of the 7,000-odd residents of Lake Murray survive on very little money. There are a few cash-based industries, all tied to the land; things like eaglewood scavenging, an exotic spice that’s sold to visiting Indonesian traders; rubber planting, backbreaking work that earns only 1 kina—50 cents—per kilogram; and crocodile hunting, a perilous profession conducted in the traditional fashion with canoes and harpoons. Most of the work carried out is subsistence of nature: fishing, hunting pigs and deer with dogs, and planting small plots of land with banana, pineapple, coconut, taro or sweet potato.

Before we return to the lodge, Andrew takes me to meet Tony Alemnso, an elder at the Adventist Church and resident expert on Lake Murray’s Loch Ness monster. In 2008, Tony was contacted by Genesis Park, a fringe US Christian group that seeks to prove ’dinosaurs and man were created together and have co-existed throughout history’ in order to debunk Darwinism and affirm creationism. It contracted Tony to visit remote communities around Lake Murray and look for evidence like dinosaur footprints or large reptile eggs to justify a large-scale US-led expedition.

“I didn’t find any material evidence,” Tony tells me, showing me a printout of simplistic drawings of three different dinosaurs sent to him by Genesis which he used as a visual prop during his fact-finding mission. “But I spoke to nine different people who said they all saw the creature’s head in the water. I believe them because they are trustworthy people—good hunters who said the creature made their dogs bark like they’ve never heard before.”

As ridiculous as the story seems, it’s not out of sync with the discourse in PNG. The people here aren’t savages. They’re anything but. Alemnso, for example, speaks five languages including English with an aristocratic accent inherited from the missionaries who taught him at school. But belief in folklore and magic is widespread in PNG, creating fertile ground for cashed-up evangelicals and their whackjob objectives.

Encountering the real monsters of the deep

Despite their propensity to drink, sports fishermen are early risers. At 6.30am the following morning, we motor to the Strickland Rivers where black bass are more concentrated.

I keep an eye out for dinosaurs, but they fail to materialise. I do however see one of their most striking ancestors: a monstrous saltwater crocodile, maybe five or even six meters long, stalking a flock of pelicans on a mud bank. Our boat driver Kevin Samson tells us of a crocodile that had got into the nasty habit of pulling villagers out of their huts in the still of night—until a mass manhunt reversed the cards and put it on the dinner table. Kevin has not even finished his tale when the croc makes a determined but ultimately futile charge at the pelicans, who fly off to greener pastures.

We spend the morning trying our luck in different spots along the Strickland where Pip and the two fishermen in our boat use $1,000 fishing rods with 80-pound lines to cast handmade lures near the banks where black bass reside. At other times, they trawl lines off the back of the boat while Kevin putts slowly along the shore. But they don’t have any luck. The river has reversed its course and is muddying the waters, making it difficult for the black bass to see the lures.

Pip directs Samson to a large moon-shaped billabong where we spot a great billed heron.  “A sign” Pip quips, “that we’re about to get a fish”. But after an hour or two of trying different spots without success, they call it quits and break for lunch.

Late in the afternoon, we’re trawling in the lake, when a fishing rods flicks back with lightning force. It’s followed by a drawn-out battle between man and fish, the result of which is no way guaranteed. Back at the lodge, Pip had shown me a photograph of a fisherman from a previous expedition, posing with a $1,000 rod that had snapped clean in two. “When a black bass strikes, it’s like an electric shot through your rod,” he says. “There isn’t a sense that isn’t stimulated.”

Yet on this occasion, man triumphs and a writhing 87-centimeter-long monster is plucked out the lake. The black bass is photographed, measured and released in accordance with the fisheries management plan that Bob Bates, the lodge owner who single-handedly opened these highlands to tourism, nutted out with the locals.

Returning to the lodge at sunset is an exhilarating experience. The sky is painted in a panoramic fresco of crimson and lime as the sun, a burning planet, melts into the waterlogged horizon. We have a barbecue to look forward to, plenty of stiff drinks, and stories to share about the one that got away.

“Being here is magic,” says Pip. “The fish—they’re just a bonus.”

This photographer hops freight trains through the Sahara 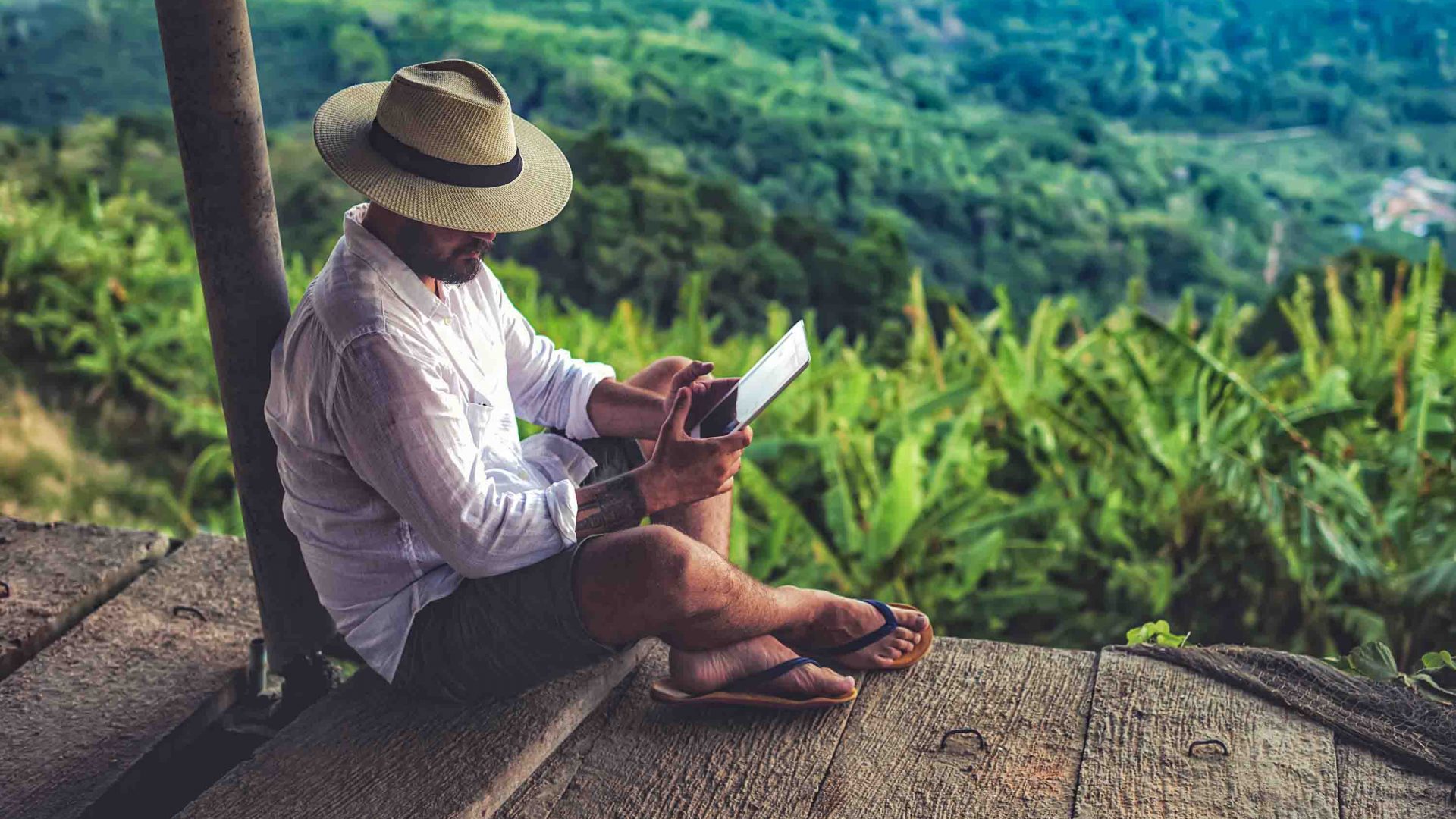