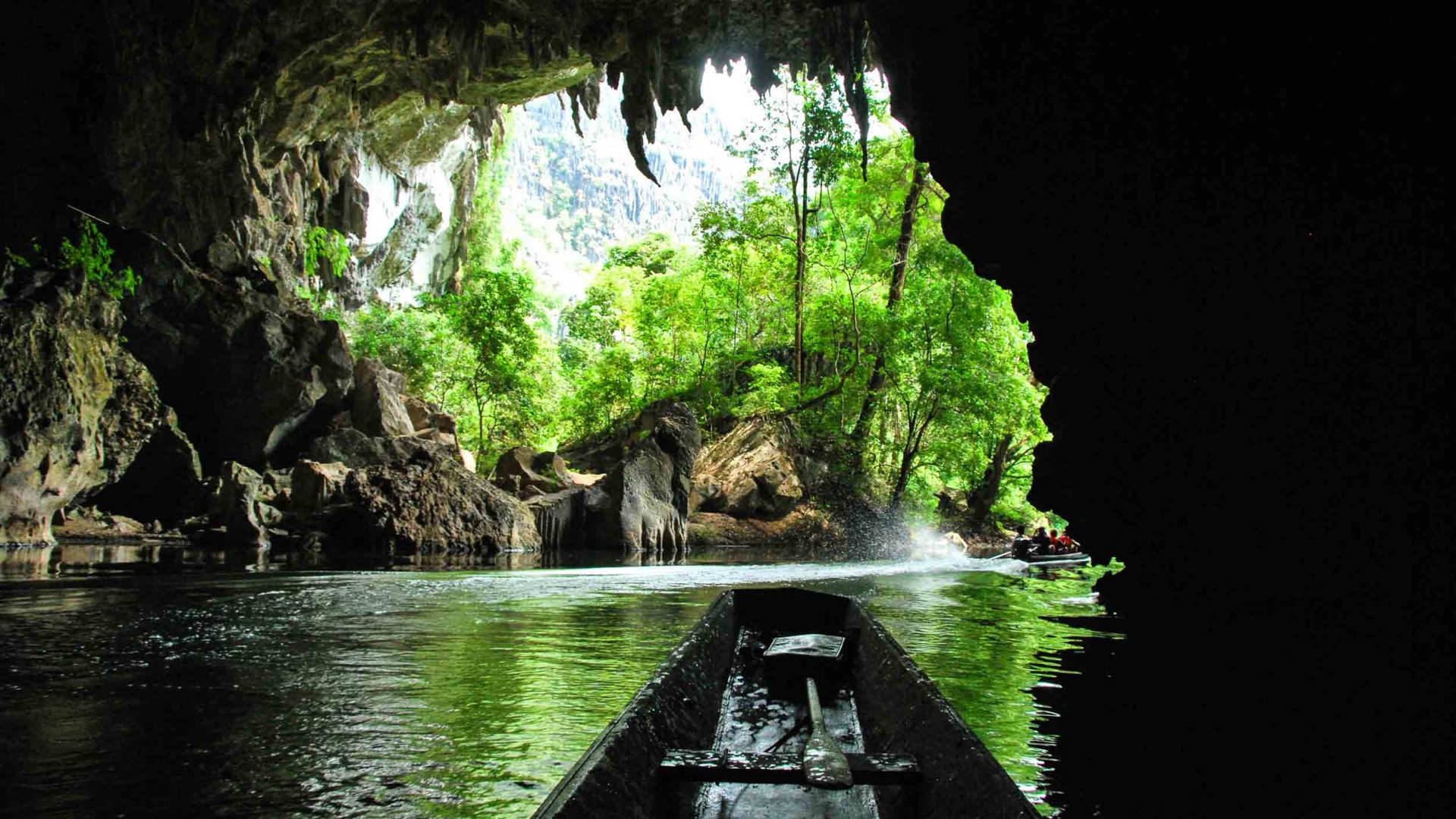 It’s way off the tourist trail and difficult to get to, but Laos’ Kong Lor Cave dishes up a theme park-sized experience for those willing to make the journey.

Imagine Disneyland’s Pirates of the Caribbean ride at Space Mountain speed. Now imagine it on an underground river, in the dark, inside a massive cave in Central Laos. That’s what it feels like to fly through Kong Lor Cave on a longtail boat. Some even liken it to the River Styx—the mythological ancient Greek river that supposedly links Earth with the underworld—or Gollum’s underground lair from The Lord of the Rings.

Set in the relative wilderness of the Phu Hin Bun National Protected Area, some 200 miles east of the capital Vientiane, Kong Lor (which means ‘beauty in the dark’) is difficult to get to and hidden from the main Vientiane-Vang Vieng-Luang Prabang tourist trail. In fact, most travelers to Laos wouldn’t have even heard of it. But those who make the journey are in for a treat.

The fast boat ride takes travelers along a rushing underground river that leads to a lush hidden valley. The limestone cavern itself is spectacular—over 300 feet high in parts—and full of ancient stalactites and stalagmites.

Alternately called Tham Kong Lo, Kong Lor or Konglor, legend has it the underground river was discovered in the 16th century after villagers noticed a strange-looking duck, that wasn’t native to the area, swimming in the emerald pool outside the cave.

The motor roars and then we’re off, speeding into the darkness, my nerves tingling with excitement from the ever-present threat of submerged rock. Neither boatman speaks enough English to reassure us.

When some ready-to-plant rice seed bundles and a carved wooden buffalo yoke also appeared, they began to suspect the Nam Hinboun River might go right through the mountain. After three days exploring by torchlight on canoes, they made it to the other side, where they founded the villages of Ban Sianglae and Ban Kkunkeo.

Paddle power made the trip upstream difficult in those days, so the cave fell out of use. It wasn’t rediscovered until 1995, and in 2002, several enterprising locals opened it up to tourists.

The villagers from Natan, on the far side of the river, still use the cave as their main method of transportation, due to the terrible roads in the area. When they need to ship a crop of tobacco to the markets in Thakhek, the capital of the province, they simply load up a longtail and head into the darkness.

As I enter the huge mouth of the cave, there’s a mounting sense of anticipation as the light gives way to pitch black. The longtail boat I’ve clambered into is so narrow and shallow, it’s difficult to balance, especially with three others on board.

The motor roars and then we’re off, speeding into the darkness, my nerves tingling with excitement from the ever-present threat of submerged rock. Neither boatman speaks enough English to reassure us, but the man at the front constantly scans the water ahead, using a paddle to push the boat away from larger rocks.

After a little while, we pull up at a rocky outcrop for a walk around the cave’s most impressive stalactite and stalagmite formations. Thanks to a donation from a French organization, they’re lit colorfully, but tastefully—unlike some of Vietnam’s gaudier caves. Here, it looks like the set of an alien planet from an old sci-fi show.

I’ve been told to wear shoes I can get wet—and I’m grateful for the advice. On four or five occasions, the water is so shallow that everyone has to get out of the boat and splash along the rocky river bed while the boatmen carry the longtail to deeper water. For me, splashing through a river by torchlight is half the fun, but you may want to think twice about bringing your great-grandma on the trip, unless she’s particularly surefooted.

Dwarfed by a dramatic limestone karst ridge, Kong Lor town is set among rice paddies and tobacco fields. It should be packed with tourists, cafés and peddlers selling tat, but it’s like stepping back in time.

And then, after about an hour, we emerge from the mouth of the cave, blinking in the sunshine as we take in the vivid colors of a gorgeous hidden valley. The wide green river is framed by impossibly verdant vegetation and limestone soars above our heads. If you’re lucky, you might see buffalo cooling off in the water.

After a brief look around, we make our way back through the cave. The return leg is much faster—it’s downstream and takes about half the time. All told, it’s an impressive day trip for $15 split three ways.

Discounting the cave, the village of Kong Lor is well worth a visit in its own right. The story goes that the town was founded by a couple of orphaned sisters after they were thrown out of their own village due to a misunderstanding involving a rainbow, a Buddha statue, and a poisoned water supply. The villagers still pay tribute to their matriarchs with a tradition that demands a groom moves into his bride’s home after they marry.

Dwarfed by a dramatic limestone karst ridge, the town is set among rice paddies and tobacco fields of Laos’ Khammouane Province. It should be packed with tourists, cafés and peddlers selling tat, but the infrastructure is so simple, it’s like stepping back in time. Chickens roam the dirt roads, and weather-beaten farmers wrangle tiny tractors that resemble engines on wheels.

RELATED: Is Vietnam the next big adventure hub?

There’s no ATM, which is less of a problem than you’d think since there’s also nowhere to spend your money—save from a few tiny stores that sell around two items each (fortunately, one of them is Beer Lao). The village kids are still excited to see us farang—one boy runs over with a huge grin on his face just to give me a high-five.

There are nine fairly basic guesthouses, and the odd higher quality three-star ‘resort’. Plenty of locals offer homestays though, an experience which should be on everyone’s agenda in Laos as hosts are typically generous, friendly and happy to welcome you into their lives. Having recently enjoyed a homestay on a Mekong trip, we book into a guesthouse that offers an incredible view of the limestone karst for a grand total of $10 a night.

Theng Thor, who runs Kong Lour tours through the Vientiane-based eco-tourism company Green Discovery, loves the area. “You feel amazing when you get to the cave, because nothing around Vientiane is like it,” he says. “Not many (foreign) people know about the region. Or some people might know, but feel it’s a bit complicated to get here.”

And so we arrive back at Kong Lor’s blessing and its curse: It’s an absolute nightmare to get to.

In any case, there’s nothing quite like watching the sun dip over a spectacular limestone ridge after a surreal day spent speeding through a pitch-black subterranean world. So however you end up at Kong Lor, know this: It’ll be well worth the effort.

The easiest (and therefore most expensive) way to see Kong Lor is to join a private tour from Vientiane or Thakhek. The Stray Asia hop-on-hop-off bus spends a night in Kong Lor on the way down to Don Det, the main island of Laos’ 4000 Islands/Si Phan Don archipelago. Green Discovery Adventure & Eco-Tourism also offer a range of Kong Lor Cave itineraries.

Some people hire motorbikes in Thakhek and visit on the 35-day ‘Thakhek loop’. But the cheapest (and therefore most popular) option is to catch the local bus from Vientiane. It’s only 200 miles, but takes all day thanks to the many stops and notoriously awful roads. Try and visit in dry season (November to April) when the roads are at their best.

Andrew Fenton is an Australian freelance journalist and travel writer. He’s been a national entertainment writer for News Corp, film journalist for The Advertiser and a staff writer on SA Weekend and The Melbourne Weekly.