How a volcanic eruption saved a tiny Indonesian island (from itself) 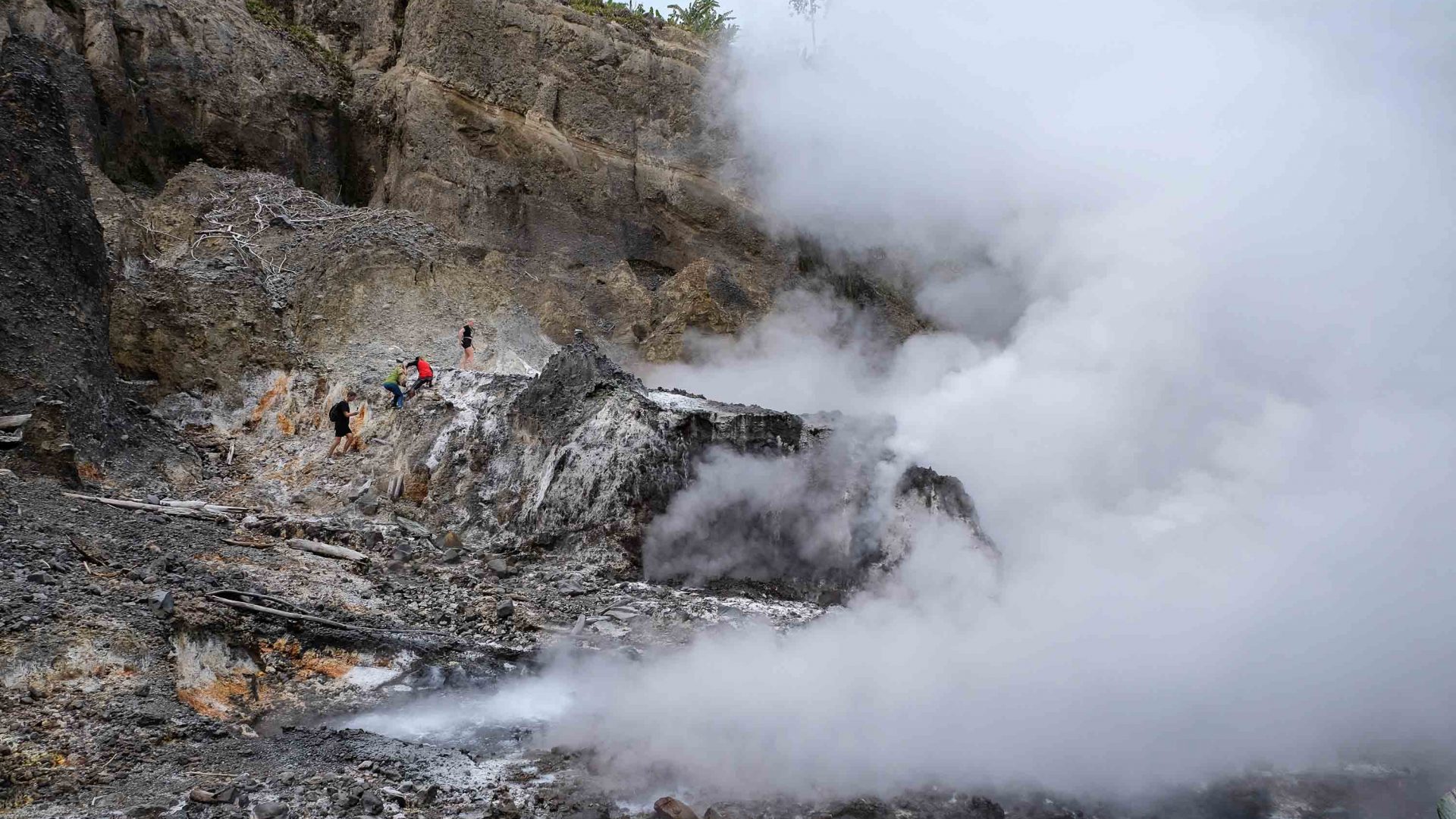 A pristine Indonesian island and a grumpy old volcano teaches travel writer Marco Ferrarese that sometimes, nature will look after herself—whether anyone realizes it at the time or not.

Bent over a plank of wood, Papa Opi expertly smudges its raw surface into a smooth, polished piece. A proud creator, his hands shuttle up and down, firmly gripping his tool’s handle. It’s only when he takes a break from the wood that he lifts his head up, and our gazes finally meet.

The calm in Papa Opi’s eyes belies a tragic tale of survival. The same calm emanates from his voice when he starts telling me about the 1983 eruption of Gunung Colo. Once a mighty conic volcano, today’s Colo lays dormant on the opposite side of Una-Una island. But it’s never quiet: Its cracked caldera still hisses white sulphurous gases, as if the volcano never wanted to stop talking.

That slice of hell on earth is not far from where we are both standing—a 30-minute motorbike ride (there are no cars on Una-Una) across the island’s rutted jungle tracks and a dry river bed leads visitors straight to the mouth of that fire mountain.

“We knew that the eruption was coming,” says Papa Opi. He puts his wood polisher down and turns to take a look at the flat, azure sea that beckons beyond a line of tall coconut trees. “So we just left. And thinking back at it, I don’t even know if it was such a tragedy,” he continues as a single-file of palms swings in the breeze behind him.

RELATED: The epic sand dunes that buried an entire civilization

Before 1983, the almost-circular island of Una-Una was the central hub of Indonesia’s Togian islands. These 56 beauties lay strewn like floating crumbs across the lower part of the Tomini Gulf, sheltered between the two strips of land that double as Sulawesi’s north-eastern end. Back then, Una-Una had five thriving villages and daily boat connections to Gorontalo and Ampana, the two most important cities on the two opposite sides of the gulf.

And it also had Gunung Colo, the only volcano in all of the Togians. That stone giant stood tall like a good luck charm for the fast-developing island … at least until year 1983 came in, and the mountain started sending clear signals that something was about to change.

“We knew it was coming and had all the time to prepare a proper evacuation,” remembers Papa Opi as the cigarette hanging from his lips casts a ghostly barrier of smoke between us. “I was only 17 at the time”.

Packing their boats to the gills, Una- Una’s people floated away to the safest ports of Sulawesi’s mainland, leaving all their worlds behind to become food for lava.

What if by chasing away all the humans, Colo was instead making a small sacrifice in order to protect Una-Una’s rich environment and marine life?

After a long pause, Papa Opi continues: “Some people say that only one man refused to come along. Without fearing Colo’s wrath, he locked himself up in his own house”.

When the violent eruption literally nuked the island from its core, transforming Colo’s once imposing cone into a flame thrower of lava and flying rocks, the lone wolf rolled himself into a thick bamboo floor mat. He shoved himself into the safest corner of his house, and waited for the danger to pass.

“And you know what?” Papa Opi picks up his tool and lands it back on the wood. “That crazy fellow didn’t die in Una-Una. He eventually joined us on the mainland, because there was nothing left on the island. All the villages were gone; it was hard to find food and survive. Isn’t it ironic? He survived Colo to die a couple months later in a construction site in Ampana.”

But had Colo been such an evil aggressor, after all? Sure, it chased Una-Una’s inhabitants away to empty its burning guts. But it gave a warning. And what if by chasing away all the humans, Colo was instead making a small sacrifice in order to protect Una-Una’s rich environment and marine life?

RELATED: The tiny Indonesian village where dancing is a social currency

“Look at it from this perspective: It took many years before the original inhabitants dared to come back and set roots again on the island,” explains Emiel Wevers. A tall, shaggy-haired, young Dutchman, Wevers is the owner of a local dive resort, and the reason why Papa Opi is making a decent living by working here as a carpenter. “Their fear of the volcano, in the end, turned out in favor of the island’s corals and fish,”

Formerly a financial advisor for a Dutch bank, Wevers first came to Una-Una to help his aunt who wanted to open a small resort on a forgotten Indonesian island and had asked her nephew to supervise her on the deal’s finances. But for Wevers, it was love at first sight: He put all his savings down, quickly went back to Europe to settle his former commitments, and by the time he returned to the island in July 2017, his dive center was open.

“The volcano is still active and offers a nice crater hike,” says Wevers. “I believe that Una-Una’s potential as a tourist destination is very high: It offers some of the best diving in the region, with Napoleon Maori wrasse, humphead parrotfish and barracudas everywhere. And there’s a huge variety of reef formations and 35 dive sites … we’ve got isolated coral atolls with sheer deep walls, fringing reef slopes, barrier reefs, coral gardens, deep-water features, muck diving, and even mangrove areas.”

Colo’s brutal—if unintentional—strategy seems to have worked in terms of protecting the island: No more permits will be given to open any resorts in order to protect Una-Una’s natural balance, now part of a marine park.

The best thing is that thanks to Mount Colo’s 20-year-long break, all of this natural treasure is still largely untouched by the deadly practice of mine fishing that’s so popular among the Bajau tribes living on the other Togians. On the other hand, Una-Una is also becoming easier to reach, with more tourists coming in, increased frequency of boat transfers, and a daily direct flight from Jakarta to Ampana.

In a way, Colo’s brutal—if unintentional—strategy seems to have worked in terms of protecting the island: No more permits will be given to open any resorts in order to protect Una-Una’s natural balance, now part of a marine park.

“It’s not just about making money with tourism, but also to help get Una-Una’s community back on their feet and reap the benefits of their former tragedy,” Wevers concludes before he excuses himself to go and teach English to the village’s children.

The next morning, I set off early because I have one last character to meet. It’s a harsh drive to the other side of the island, and after having walked for an hour to the source of the dry river, the air gets steamier the closer we get. When the track squeezes between two high boulders, we have to climb our way up and into the caldera, and there it is: The mighty Colo.

Colo is no longer a beauty and smells of rotten eggs. It makes me gulp down in fear each time it spits a column of white smog through the air. Meeting Colo feels a bit like standing on top of a gigantic pressure-cooker, but I shouldn’t fear, because this ancient volcano has already demonstrated that it doesn’t really mean any harm.

Marco Ferrarese is a Penang-based author, travel writer and former punk rock star. He has reported from the lesser-known tracks of 60+ countries, hitchhiked from China to Italy, and written guidebooks for Rough Guides and Fodor's. 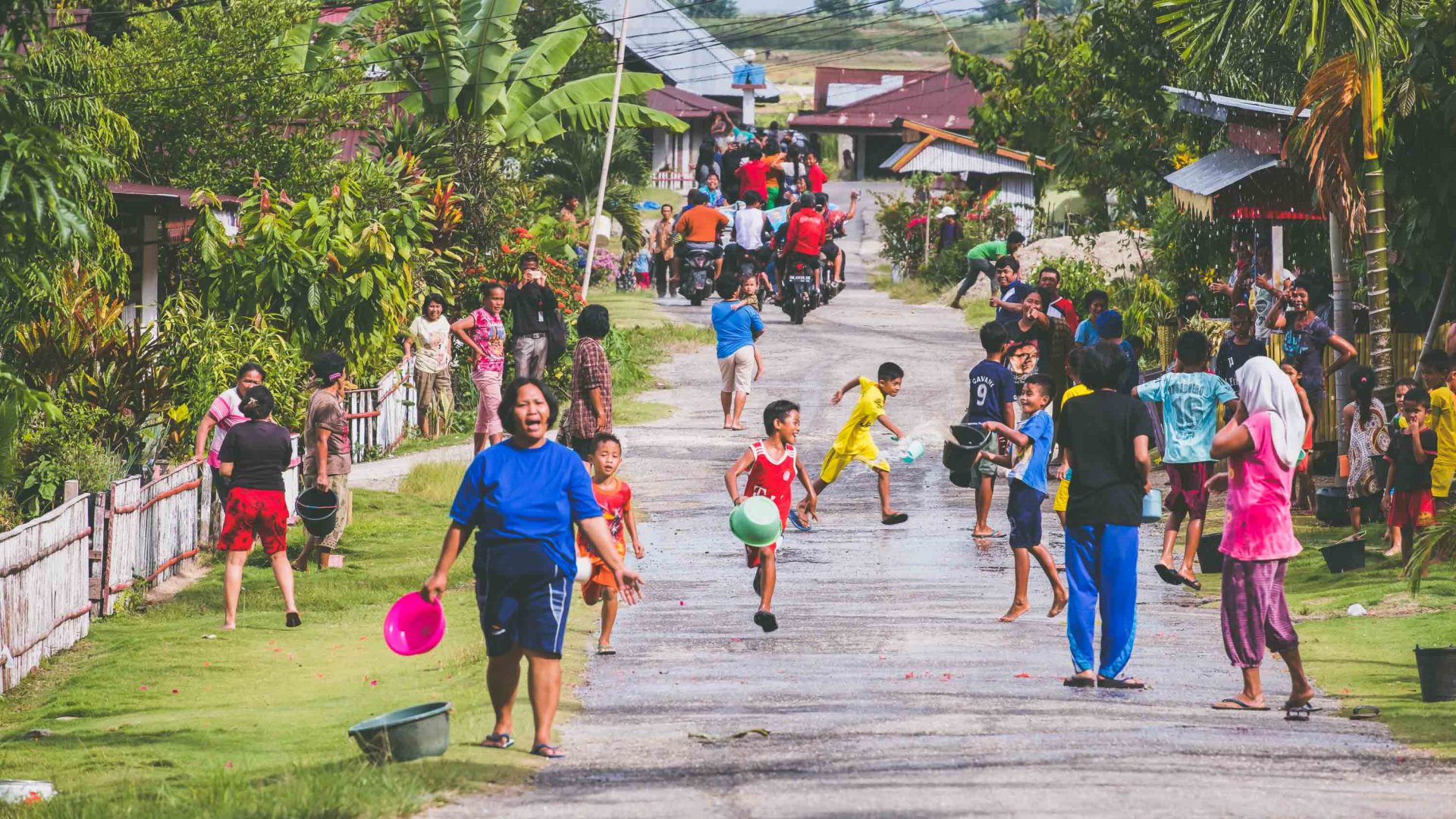 The tiny Indonesian village where dancing is a social currency