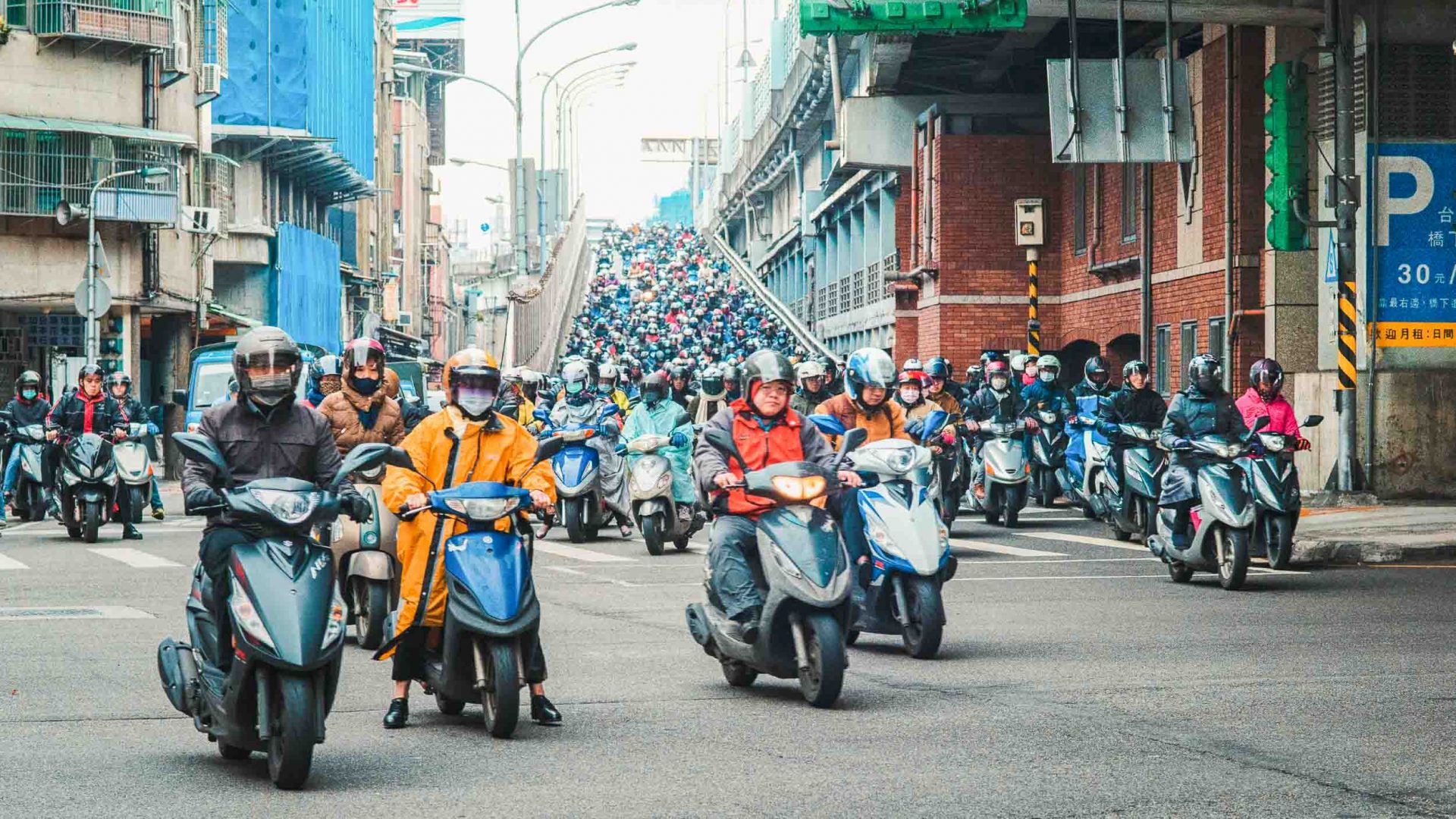 Many travelers dismiss the idea of renting automatic scooters in Southeast Asia and other parts of the world on account of not having a license. But those travelers are missing out, argues Ben Groundwater.

“Have I made a terrible mistake?” That’s a question you will most definitely ask yourself at some point on a motorbike adventure in Southeast Asia. That and others like,”‘Was this the worst idea I’ve ever had?”And, “Should I give up, turn around, and just forget this whole thing ever happened?”

They’re reasonable questions and certainly, all of them flashed through my mind as I hurtled through the chaos of noise, dust and bright lights that is central Ho Chi Minh City. I was only about two minutes into my six-day journey around southern Vietnam. Have I made a terrible mistake? Possibly.

I’d pulled out of the rental office on a 110cc Honda Blade, tootled down a quiet suburban street, and then emerged onto one of the main thoroughfares of this heaving metropolis. The enormity of my challenge was suddenly writ large and loud: The trucks that take no prisoners; the cars that stop and start and swerve with no warning; and the scooters—so many scooters—that dodge and weave through traffic, appearing out of nowhere from the side of the road, joining and leaving the vast torrent of traffic like twigs thrown around a raging river.

So yes, I felt I had cause to ask myself if I’d bitten off more than I could chew. It’s intimidating out there for first-timers. It’s scary.

Riding a motorbike or scooter in Vietnam, and indeed in the rest of Southeast Asia, doesn’t have to be a white-knuckle nightmare.

But here’s the thing you eventually learn, and that I eventually learned, about riding a scooter around Ho Chi Minh City, and around Vietnam, and around anywhere in Southeast Asia: It’s one of the simplest, most rewarding, and most enjoyable travel experiences you can have. But like most good things, it just takes a while to settle in.

“Motorbiking is obviously an adventure activity, and a dangerous one at that,” says Jon Pepper, the owner of Tigit Motorbikes, the aforementioned hire and sales shop in Ho Chi Minh City. “You have to understand the risks you’re taking, and weigh up if this risk is worth the reward. It’s not for everyone.”

That said, it could be. As I’d find out once I’d left the insanity of Ho Chi Minh City—the dust, the crowds, the honking—and hit the open roads of the Mekong Delta, riding a motorbike or scooter in Vietnam, and indeed in the rest of Southeast Asia, doesn’t have to be a white-knuckle nightmare.

In fact, if you take the right precautions and allow yourself the time and space to ease into the rhythm of rural Asia, life on a scooter can be pretty sweet. “The roads here look chaotic, but they’re unbelievably slow,” says Jon. “Back home, there are rules, and people follow them. However, people drive quickly and a mistake can lead to a major crash. In Vietnam, mistakes are common, but the road speeds are so slow that you just get back up again, rub off some scrapes, and move on.

RELATED: Tackling the world’s most dangerous road (on a bike)

“At Tigit, we have never had a new driver have a serious crash. They join the local speeds at around 25mph and just casually roll through the country. The real crashes have come from experienced riders who bring their ideologies and speeds from home. It just doesn’t work here.”

If safety is a big priority for you—and it should be—there are several things to think about before embarking on a Southeast Asia motorbike/scooter adventure. The first is protective gear. If you’re worried about crashing, you’ll want to bring your own gear. Western-quality helmets aren’t always available here, and if they are, they’re extremely expensive. And if you want gloves, boots, or any other protective clothing, buy those at home, too.

You’ll also need travel insurance, and you’ll want to check the wording of your policy very carefully. Some insurers won’t cover you for motorbike trips. Others will only cover you if you are licensed to ride a motorbike back home, and are wearing a helmet when you ride.

In some countries, such as Thailand, you’ll need an international license to ride legally. In others, such as Vietnam and Cambodia, the rules are murky and not always enforced—however, technically you need a Vietnamese or Cambodian license to be 100 per cent legal. In Laos, meanwhile, you’ll sometimes be asked for a license, and sometimes a passport. Depends on who you’re speaking to.

“There’s a market for re-sales of Chinese-made motorbikes, where backpackers buy from each other. It’s incredibly dangerous.”

At most hire shops throughout Southeast Asia, you’ll either have to leave a large cash deposit—often in US dollars—to hire a bike, or your passport, which isn’t ideal for longer journeys, or for proving your legality to inquisitive traffic cops.

If you do leave your passport—which many travelers do with no issues whatsoever—just be aware of what you’re signing up for. If there is any damage to the bike once you return it, the vendor may well hold your passport until you pay for the damages. A minority of vendors have been known to accuse travelers of causing existing damage to their bike, so take plenty of photos of the bike (from all angles) before riding so you can prove otherwise. In any case, you’d be wise to ask your hostel/hotel owner for reputable nearby rental shops.

And then, of course, you’ll need to consider the sort of bike you’re renting or buying. In Vietnam, you can get a short-term rental from a company like Tigit, or, for longer journeys of more than a month, you can buy a bike outright from the company and they’ll buy it back from you at the end of the trip. There are similar services throughout Southeast Asia. And if you’ve never ridden before, go automatic.

RELATED: Can Vietnam reinvent itself as an adventure hub?

“Get a motorbike that’s safe to drive,” advises Jon. “There’s a market for re-sales of Chinese-made motorbikes, where backpackers buy from each other, or from little street dealers, and it’s incredibly dangerous. The bikes break down all the time and the low build quality means they have poor stopping distances and incredibly wobbly handling. This market is dishonest and dangerous and I wish people would wise up to it. Too many holidays are being ruined, which ruins the reputation of the industry as a whole.”

There is, of course, no completely safe way to hire and ride a motorbike or scooter in Southeast Asia. It’s an inherently risky activity, both legally and occasionally physically, and you have to be prepared to take on that risk before you hit the road. However, with the necessary experience, the right precautions, and an adventurous spirit, this could turn out to be one of the most rewarding journeys of your entire life.

It certainly was for me. Just, one piece of advice: Get out of the city and into the countryside as soon as you can.