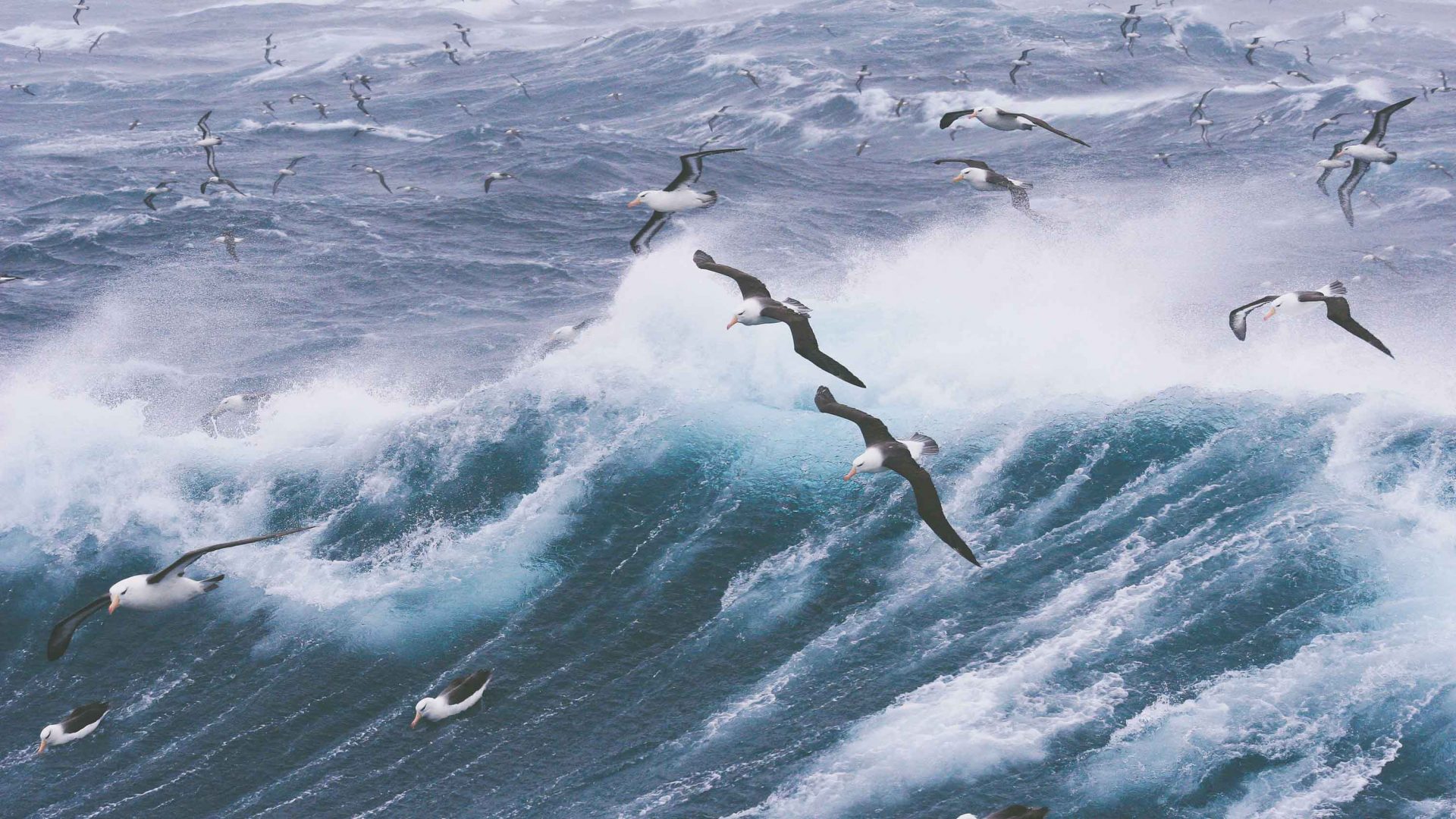 When you think of the Falkland Islands, chances are it’s the 1982 war between Britain and Argentina that comes to mind. But this archipelago is a wildlife haven, as Shafik Meghji discovers.

It would be worth making the trip to West Point Island for Jackie’s baking alone: Her kitchen table heaves with 26 different types of home-made cakes, pastries and biscuits. But the real reason my cruise moored here, on the northwestern tip of the Falklands, is the remarkable profusion of birdlife— West Point is home to vast rockhopper penguin and black-browed albatross breeding sites, as well as 800 sheep, 200 cows and two humans.

After filling up on scones, cinnamon whirls and slices of coffee cake, I leave the White’s white-picket-fenced, weather-boarded homestead and cross a landscape reminiscent of the Scottish Highlands, with misty hills covered with scrub and patches of bright yellow gorse.

Some 20 minutes later, I hear a cacophony of cries, hoots, quacks, coos and lamb-like bleats—mixed with camera clicks—emanating from a sandstone cliff high above the churning South Atlantic. After clambering through thick mud and chest-high grass, I get within a few meters of hundreds of rockhoppers and albatrosses, seemingly oblivious to the presence of dozens of tourists.

RELATED: Forget city breaks: Give me life and death on South Georgia

Aside from the occasional wing flex, the former sit quietly on their nests. The penguins are livelier: They’re squawking tetchily at each other, obsessively preening, and, living up to their name, hopping from one rock to another with impressive dexterity.

The Falklands remain synonymous with the eponymous 1982 conflict between Argentina and Britain, but West Point Island provides a different perspective. The archipelago of almost 800 islands was discovered by Dutch sailors in the 1600s and later inhabited by French, British and Spanish settlers, alongside a multinational cast of sealers, whalers, privateers and traders. Sovereignty was contested by the UK and Spain; and when Argentina won independence from Spain in 1816, it took on its former colonizer’s claim over what it calls “Las Islas Malvinas”.

The wildlife here is utterly fearless, which allows for close-up encounters that are rarely possible elsewhere.

In 2013, islanders voted overwhelmingly to remain a British overseas territory, but the 1982 war remains a central aspect of life, with many areas still off-limits due to the presence of land mines. Its relationship with Argentina remains tense, not least because of plans to exploit major offshore oil and gas reserves. But they only tell part of the story.

“Some people still think we’re living like we were during the war in 1982. We’re not—we’ve moved on,” says Phil Middleton, a tour guide and owner of the Falkland Collectibles shop in the capital Stanley. Situated 500 kilometers east of Argentine Patagonia and more than 12,000 kilometers southwest of the UK, the Falklands are incredibly isolated. And this, combined with a low population density of around 3,400 people in an area larger than Jamaica, has allowed wildlife to flourish in a way that is quite remarkable.

The islands are home to 70 per cent of the world’s black-browed albatrosses, hundreds of thousands of penguins from five of the world’s 17 species, and endemic birds like the flightless steamer duck, while sea lions, seals, whales, dolphins and orcas are also found in the surrounding waters.

RELATED: How swimming with humpback whales can help ocean conservation

“The penguins come here to breed in huge numbers and you get to see them nesting, protecting their eggs and courting,” says Marty Garwood, Polar Latitudes’ ornithologist and former head penguin keeper at Sydney Aquarium. “The mating rituals of the albatrosses are even more elaborate, with lots of mirroring of each other’s movements.”

Moreover, the wildlife here is utterly fearless, which allows for close-up encounters that are rarely possible elsewhere. One of the best places to get a sense of this is Saunders Island, a short sail east of West Point Island. We land at the Neck, a thin strip of land with gorgeous white-sand beaches on either side, backed by treeless hills nibbled at by sheep. Four species of penguins—king, rockhopper, gentoo and Magellanic—have rookeries here. Tourists are supposed to stay at least five meters away from them—but it’s the birds themselves who flagrantly ignore the rule.

“There are few land-based predators here, so the penguins are very curious of humans,” explains Garwood. “Sometimes they even peck at you to see if there’s something tasty to eat.” On several occasions, as I set up a photo, I hear a rustle behind me and spin round to find myself face-to-face with a curious-looking penguin, head cocked to one side.

“The biggest misconception is that the Falklands is a little part of Britain. We’re a British Overseas Territory. We’re Falkland Islanders. There’s a strong local identity. We’re a small, forward-looking, progressive community.”

Many penguins are nesting, keeping a beady eye out for predators. And not always successfully. We watch a muscular, gull-like skua swoop in and snatch away an egg, leaving the mother distraught. Another group of penguins is enduring a ‘catastrophic moult’, which takes place after the breeding season. With their bodies covered with random bald patches and unruly tufts of new feathers, they look as if they’ve stumbled out of an avian horror movie.

There are more cheerful scenes on the nearby beach where penguins waddle back and forth to the water, their toddler-like gait suggesting they’re on the verge of toppling over. Eventually, one by one, they plunge into the surf and very soon, they’re ‘porpoising’—skimming the surface like dolphins.

Wildlife is found throughout the archipelago, but most islanders live in Stanley, on the northeast coast of East Falkland. Buffeted by ferocious, near-constant winds, I explore the town that’s at once home to familiar sights like red post boxes and pubs selling fish and chips, but also of reminders that I’m somewhere utterly distinct—not least the sight of the jawbones of two blue whales that form an arch outside the cathedral.

The population is also more cosmopolitan than might be expected, with around 60 nationalities: Most are of British descent, but there are also sizeable Chilean and Santa Helenian communities. Islanders enjoy confounding expectations.

“There’s an attitude amongst certain types of British tourists who say things like, ‘This is like Britain after the Second World War’,” explains Middleton as we chat in his shop in the grounds of the Historic Dockyard Museum. “But it’s not,” he tells me. “The biggest misconception is that the Falklands is a little part of Britain. We’re a British Overseas Territory. We’re Falkland Islanders. There’s a strong local identity. We’re a small, forward-looking, progressive community.”

In fact, apart from defence, which is funded by the UK government, the Falklands are economically self-sufficient, thanks to the strength of the local wool and fishing industries. Serious challenges, however, are on the horizon. A company named Rockhopper is driving forward an offshore development called Sea Lion that could lead to the extraction of more than 350 million barrels of oil.

The Falkland Islands government is supportive of the plans but it claims that protecting the archipelago’s fragile ecosystems—and its actual rockhoppers, sea lions and other species — remains a key priority. Many conservationists, however, have serious concerns. In the meantime, as word gets out about the wildlife-spotting possibilities, tourist numbers are increasing: Cruise ships regularly call in during the summer months and there are weekly flights from RAF Brize Norton in the UK, and Santiago and Punta Arenas in Chile.

“It’s only when you come with an open mind,” says Middleton, as I leave his shop, “that you can really understand what this place is about.”

Shafik Meghji traveled as a guest of Polar Latitudes, which offers 11- to 22-day voyages to Antarctica, South Georgia and the Falkland Islands.

Shafik Meghji is an award-winning travel journalist and broadcaster, and the co-author of over 30 Rough Guides. Recent adventures have taken him down the Mekong, across the Amazon, and through Patagonia's Tierra del Fuego. 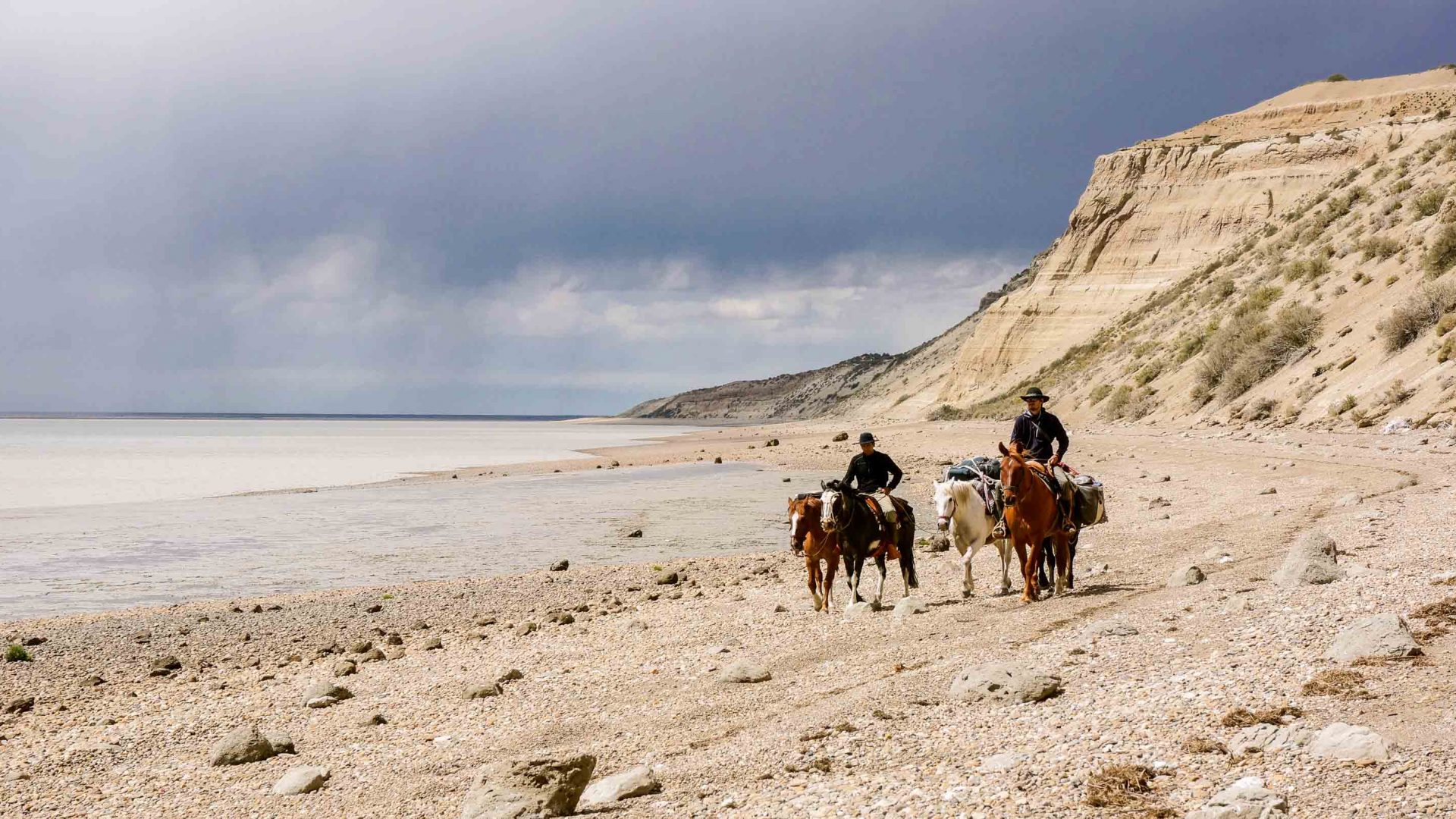