One of the largest icebergs ever recorded breaks off Antarctica 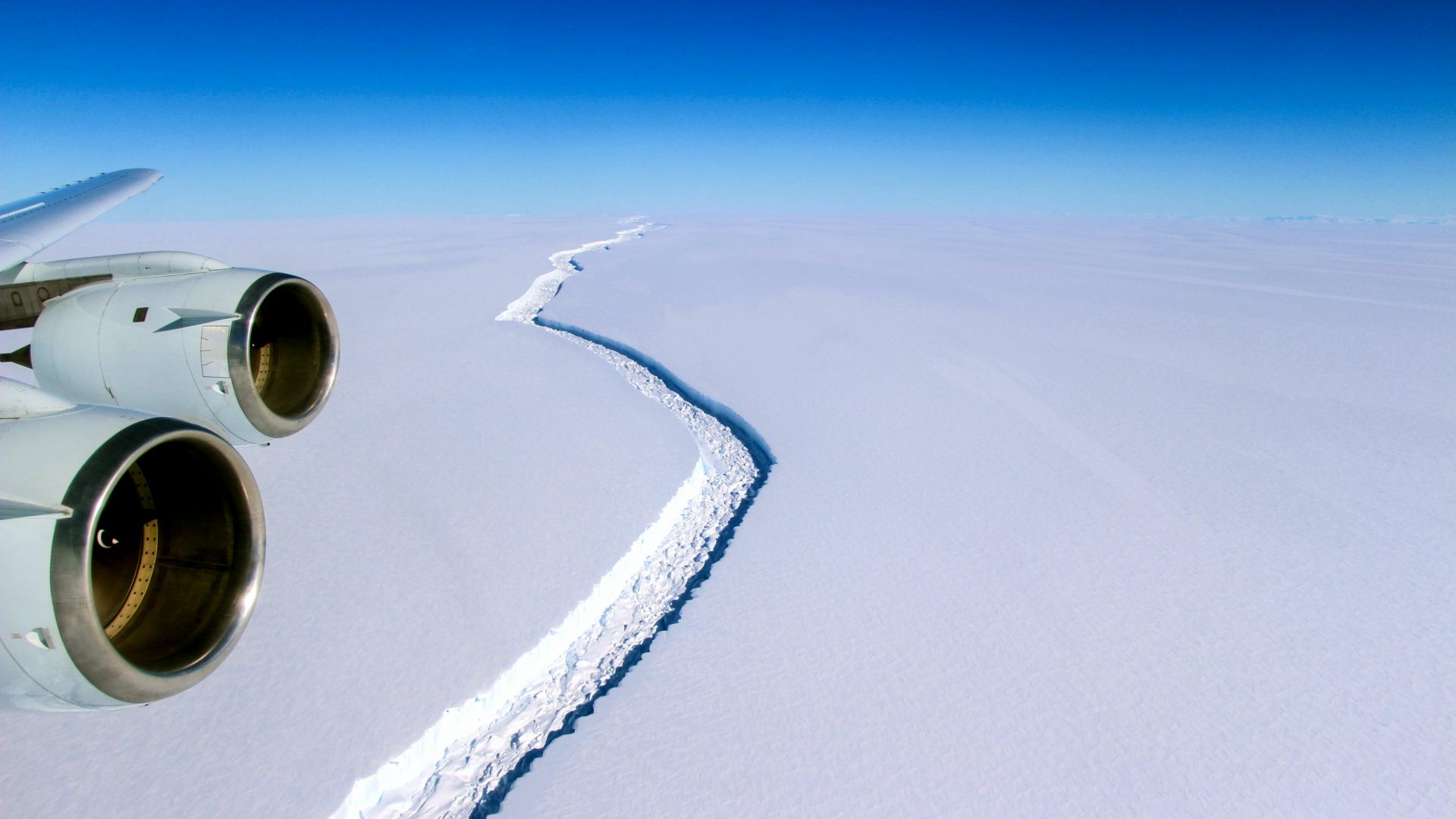 You don’t have to be on The International Ice Patrol to know that a trillion-ton chunk of ice the size of Delaware—that just broke free in the Antarctic— is worth paying attention to.

On Wednesday, July 12, 2017, news came across the wires that the ice shelf calved sometime between Monday and Wednesday, producing a trillion ton iceberg. Yes, that’s ‘trillion’ with a ‘t’. The break was captured by NASA technology. If you’re worried about the impact on sea levels, Project Midas researchers say you can rest easy—for now. “It was already floating before it calved away so has no immediate impact on sea level,” they wrote in a blog post published this morning.

Unless you’re obsessed with the Antarctic or other ice-cold climates, it’s unlikely that you think about icebergs on a regular basis.

And yet, there are thousands of people around the globe who do exactly that, working for governmental and intergovernmental agencies you’ve probably never heard of: The Canadian Ice Service. The US National Ice Center. The International Ice Patrol. Their jobs? To use terms like “ice forecasting” and “tactical scale ice and snow products” as they monitor the gigantic ice cubes bobbing around in the world’s oceans, collecting data and trying to minimize impact—especially to traveling vessels.

So they’ve been particularly busy recently, as the general public’s attention has turned toward the subject they think about every day. In a matter of “hours, days, or weeks” as a USAToday photo caption read—a blink of the eye in ice-time —a massive chunk of ice will calve from what is known as the Antarctic’s Larsen C ice shelf. This is a capital B-D “Big Deal.”

“It’s enough to cover all 50 states in 4.6 inches of ice, allowing you to skate coast-to-coast and take victory laps around Hawaii and Alaska. So yeah, it’s a huge ice cube…”

The calving will produce what is expected to be one of the largest icebergs ever recorded. When the ice finally shears from the 5-kilometer “thread” by which it’s currently hanging, there are a few unprecedented effects we’ll see immediately, say scholars at Project Midas, a U.K.-based Antarctica research group.

Just how big is this 'berg?

First, the Larsen C ice shelf will immediately lose at least 10% of its surface area, potentially destabilizing the shelf and making it vulnerable to eventual disintegration. That missing 10% will start bobbing off into the surrounding waters in the form of a beast of a ‘berg that Project Midas researchers estimate will have an area of 5,800 square kilometers, or 2,239 square miles.

Just how big is that? Well, here are some comparisons to make things real for you. A reporter for Discover Magazine calculated that the volume of this iceberg will be “more than a million times the volume of the Empire State Building.” The below-surface height will be about 64 stories, the mass will be about the size of Delaware, and the iceberg will contain enough water to fill more than 463 million Olympic swimming pools. Or, as Brian Kahn of Climate Central put it, “[I]t’s enough to cover all 50 states in 4.6 inches of ice, allowing you to skate coast-to-coast and take victory laps around Hawaii and Alaska. So yeah, it’s a huge ice cube….”

Will this be the next "Iceberg Alley"?

It will probably impact tourism, too. Earlier this year, a giant iceberg floated into Ferryland, off the coast of Newfoundland, and became grounded, “bringing tourists in droves to the normally sleepy town,” The New York Times reported. Its above-water height reached an impressive 15 stories, which, the Times said, represented only 10% of its total mass; as with many icebergs, this one’s below-water bulk was far bigger.

RELATED: Give me life or death on South Georgia

While Newfoundland Labrador Tourism already promoted the region’s “Iceberg Alley”, the global news coverage about the Ferryland ‘berg gave a boost to the town’s tourism, with foreign and domestic visitors descending on the town in droves. One local was quoted by The Telegram as saying that it wasn’t only the iceberg that was the biggest he’d ever seen; so was the line of traffic on the coastal road that yielded to views of the ice chunk.

How close can you get to an iceberg?

But as far as natural attractions go, icebergs pose some peculiar—and potentially dangerous—concerns when it comes to tourism. A number of experienced outfitters take travelers on trips to and around Antarctica, among them Aurora Expeditions, Chimu Adventures, Lindblad Expeditions, Intrepid Travel, Quark Expeditions, and, of course, icebergs are major attractions on these trips.

An iceberg like the one about to be birthed by the Larsen C could present logistical challenges in the “up close and personal” department, though, because outfitters apply a “danger zone” formula that tells them how close they can get to an iceberg. A safe distance is equal either to the length of the iceberg or twice its height, whichever is greater. Cross the safety perimeter, and you’re at risk of “falling ice, large waves, and submerged hazards,” reads Newfoundland Labrador Tourism’s iceberg safety advice.

Expect continued media attention directed toward the Larsen C iceberg, then, but don’t book a ticket or pack your bags just yet—or do, but not with the hope of seeing Larsen C’s primary calf. For safety’s sake, you might want to settle for one of the smaller “bergy bits.” Of course, to do that, you’ll have to roll a lot of coins; Antarctic expeditions don’t come cheap.